Keeping up appearances. Ambition and greed

Spoiler alert: This review reveals information that is withheld from the reader until the middle of the novel.

Claire Robertson’s third novel, Under Glass, is, like its predecessors, beautifully produced by Umuzi in a handsome hardcover edition. And, also like its predecessors, this is an historical novel, bringing to vivid life a tranche of South Africa’s past: in this instance, mid-nineteenth century Natal, with its newly-arrived British settlers establishing themselves with colonial confidence on the new continent that they assume to be theirs by divine right or imperial fiat.

This particular settler family is the Chetwyn clan: Captain Chetwyn, late of Lucknow, India, and his young wife (whose first name we never learn) and their growing family of unprofitable daughters: under the terms of the will of the captain’s father, the estate in Natal, Missenden, that he has bought for his son, is entailed in the male line; that is, unless Mrs Chetwyn produces a male heir, she and her daughters will lose the estate on her husband’s death. (Readers of Jane Austen’s Pride and Prejudice will remember that a similar entail blighted Mrs Bennet’s existence.) 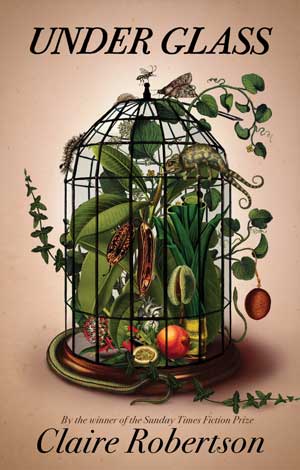 Upon this entail hinges the main intrigue of the novel: when Mrs Chetwyn produces a fifth daughter, she decides to raise her as a son and heir to the estate. The whole family are party to the deception, and the girl, who is christened Cosmo, grows up with all the privileges and responsibilities of the future owner of the estate, her burgeoning femininity painfully trussed and bound to conform to masculine garb, her movements schooled to suggest confidence and possession rather than the demure submissiveness of the Victorian maiden.

Mrs Chetwyn is the main focaliser in the novel, most of its events being seen through her perspective, but there are also first-person narratives angled through Cosmo, as he/she matures into young adulthood. The style of the novel, convoluted and formal, is matched to the corseted, inhibited lives of the characters, though it is far more imaginatively metaphorical than they would be capable of. There is hardly any overt emotion in the novel; the characters are ruled by calculation, ambition, greed and the determination to keep up appearances.

As the novel’s title suggests, these are lives under glass; the reader is kept at a distance, both by the elaborately metaphorical style and the emotional aridity of the characters. There is little direct dialogue, and the events are mediated through the dispassionate narrative style that characterises both Mrs Chetwyn’s part of the novel and, surprisingly, Cosmo’s.

This style, highly wrought as it is, does not always make for easy reading, and indeed at times sacrifices intelligibility to a straining for effect. Thus, for instance, we are given Chetwyn observing a group of men leading oxen dragging a tree trunk: “Chetwyn, hallooing as he comes within earshot, is mantled with heaviness, ahead of the men with beasts and this torn fletch.” This reader could make no sense of “mantled with heaviness” and could find “fletch” as a noun in no dictionary. Elsewhere I was puzzled by “Forked trunks, sharpened at one end, uprighted into the augured hole”, until I realised that augured is a misspelling of augered.

But these are quibbles. When the elaborate style comes off, as it mainly does, the effect is richly poetic. Still, the novel’s strength lies elsewhere, in its astonishingly detailed evocation of a Natal settler community, their daily lives and their domestic and agricultural paraphernalia. (If you don’t know what a puggaree or a havelock is, this book will send you to your dictionary.) Without labouring the point, it traces the roots of colonialism to the imperative of “the only guarantee of living on: succession and land”. Thus, when the Chetwyns acquire the usufruct of Missenden, “Mrs Chetwyn can see, in the stares of the shop owners, that by their great enterprise her young family has at a stroke broken from the herd of sorry green colonists and set itself on a more splendid path”. And, of course, Cosmo owes his/her exalted status in the family entirely to his/her presumed succession to the estate; when “the bright heir” is replaced by “a dull and scrappy sparrow of a girl” nobody deigns to notice her. Under Glass ultimately is a highly imaginative treatment of that most topical of processes: the redistribution of land.