In the pink. When WW2 came to Durbs

I am a natural living archives of the City of Durban, KZN, so to speak, going right back to the day our city went to war against Adolf Hitler.

My whole family is part of that very history. My sister had a military Polish boyfriend called Viktor, you see, though I should really hesitate to call any man so elegant a boy; let us rather call him a gentleman-lover. And I’m not sure whether I should call him Polish either, since he came from East Prussia where upper-class soldiers wore those definitive scars across their faces as badges of military passion. Indeed Viktor had a certain regard for Germans, except their lower classes, but I tell you, in the matter of pure seething historical hatred of Russians, he was pure Polish. Indeed he and others had just been released from Russian prison camps, though how they got there I could never understand. Still can’t. Skinny and starved they were sent to Natal to get fattened up and tanned and go and bliksem the Germans this time round. 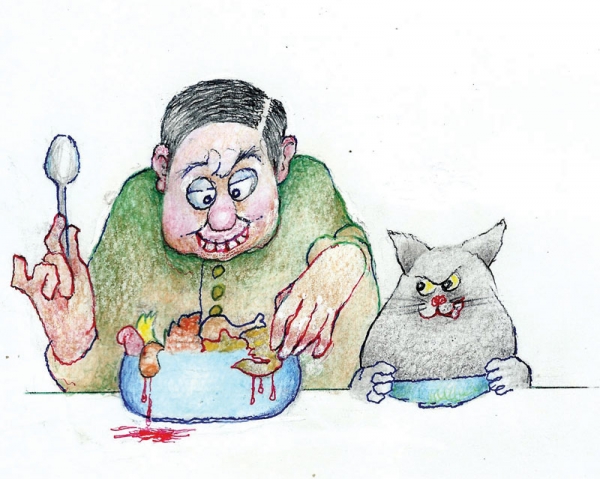 Anyway, he was an officer in the Polish army, and when I say elegant, dear readers, I mean you haven’t seen military elegance yet. Lean, rangy, he wore one of those rakish caps with a square top and riding breeches with braid down the seams and brown riding boots, and on one special parade I saw him wearing a sword. Rumour had it he had in the Royal Hotel menaced a waiter with this sword because the wine was wrong, but I don’t believe that. Part of his extreme gentlemanly code was that one doesn’t ungraciously bully those grovelling about for survival at the bottom of the social pile. And romantic! When Viktor sang those passionate patriotic songs that Poles have it really gave you the chicken-skin, man, and he was the only person I’ve ever heard sing a national anthem as if he believed in it. March, march Dimbrovsky! he would cry, springing to attention to do so.

My cousin, now, she had a fat civilian boyfriend called Theodor from South West Africa, and he was on Hitler’s side but quietly so, subtly, though when later I went off to wage war on A. H. he told my ma he hoped I’d get killed. I didn’t mind too much, he was a caricature of a pudgy German colonial, sort of quaint. He had this cat called Rommel, also fat, the colour exactly of the Wehrmacht field grey uniform, and on Sundays he and Theodor would sit at our kitchen table and view pots of thick German soup and roast meats and steaming side dishes and Theodor would bounce up and down with a chuckle and say My God, Rommel, good food and fresh! and Rommel would reply RRRommmell!

Theodor was round and flabby with bulging greedy eyes and Viktor hated him exquisitely, not because he was German but because he was low class. Vulgar. He would sit at the table where Theodor and Rommel were doing their Sunday guts up, sit in exquisite machismo and smoke through his ivory cigarette holder, and now and then say Teodor you are so tin, so fragile, you must more eatink, and lean forwards and push across a great crock of greasy greens or oily soup with his officer’s baton. Eatink some soup, he would say, unctuously, eatink some niice soup with cabbages and beans and butter, eatink some niiice meats with fats and bloods and potatoes, and Theodor would bounce up and down and chuckle Ja mein Gott! and give Rommel a piece of pork on his special saucer.

And lo it came to pass that Viktor was afforded some quiet sardonic glee when one day Police Sergeant Petrus “Hoender” Kok arrived on his 750cc Harley Davidson crime-motorcycle with side-car containing a bloody big Zulu in khaki, known as a Government Snake, with a bloody big wooden club for the physical side of things since he was not permitted to carry a firearm. Also a Ford V8 police van with steel mesh on all openings, containing certain plainclothes police officers who were here to arrest Theodor as a German spy – just as he was tucking his serviette in his collar – and stick him in a police cell.

Maybe shootink him, said Viktor to me on the side. But history being a random process, in a way Theodor got his own back. Soon enough when they’d got all these skinny Poles nicely plumped up again they put them one day aboard a ship for England, and they’d got as far as a bit north of Cape Town when round about beddie-byes time a prowling long-range Kriegsmarine U-boat plugged them, and as their ship sank slowly in the west, Viktor was brought ashore in a suit of pink silk pyjamas with a dainty floral pattern and no riding boots.