This novel caused something of a stir in its original French, and won the Prix Goncourt, France’s most prestigious literary prize. The stir is easy to understand: Lullaby (Chanson douce in French) is unabashedly brutal. The novel’s opening sentences are: “The baby is dead. It took only a few seconds.” We discover in the next page or two that a nanny has murdered her two charges, a baby boy and a little girl.

The rest of the novel traces, in pitiless detail, the process by which a perfect nanny can turn into a child murderer, and the novel’s achievement is to make it seem plausible – that is, given this particular set of characters. 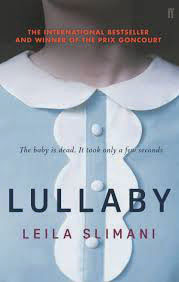 A young professional couple, Paul and Myriam, with their careers on the up and up, decide that they need a nanny for their two children, the baby, Adam, and a little girl, Mila. They vet the applicants carefully, and are delighted when Louise turns up. She entertains the children endlessly, keeps the apartment spotless and cooks delicious meals. She seems to have no wishes of her own, other than to make the children happy and keep the parents contented; but we are told, early in the novel: “The silent apartment is completely under her power, like an enemy begging for forgiveness.”

Louise, then, has the power of the underclass; but what drives her to murder? Since we know from the first sentence that she will kill the children, that question is the main narrative driver. It gradually becomes clear that Louise is morbidly fixated on this family, that they represent everything she’s never had. She desperately does not want to lose them, and at the same time resents her exclusion from their world. As she plays hide-and-seek with the children and hides from them, “She watches them as if she’s studying the death throes of a fish she’s just caught, its gills bleeding, its body shaken by spasms.”

Louise,“like a dog with its legs broken by cruel children”, is a deeply damaged person: we are given enough of her dreadful marriage to an abusive husband and her fraught relationship with her lumpish, problematic daughter, to see that she can only regard an apparently idyllic little family like Paul and Myriam’s with deep ambivalence.

The novel can be variously read as a study of a burgeoning psychosis or of the class divide in a city such as Paris. Louise, like servants everywhere, has the most intimate knowledge of her employers’ lives, whereas they don’t have an inkling of hers; indeed, they cannot really imagine that she has an existence outside their need of her. Thus, when Myriam catches sight of Louise walking down a street in a distant part of Paris, “For the first time she tries to imagine, in a corporeal sense, everything Louise is when she is not with them.” But there is no way she can imagine a life so destitute of everything she takes for granted in her own life; Louise, on the other hand, “has only one desire: to create a world with them, to find her place and live there, to dig herself a niche, a burrow, a warm hiding place.”

As “the accumulated anxieties and tensions that their progeny has insinuated between them, husband and wife, mother and nanny” escalate, and Louise senses the precariousness of her position, she becomes more and more embattled, and conceives the idea that if Myriam were to have another baby, she, Louise, would become truly indispensible. But, so her increasingly deranged reasoning tells her, the couple cannot conceive another child amidst the distractions of their existing children: “Mila and Adam are an obstacle to the baby’s arrival… Her desire for that baby is fanatical, violent, blindly possessive.”

To my mind, passages like this impoverish the novel, in seeming to reduce Louise’s murderous rage to a single cause. The “explanation” cannot encompass the whole tangled web of social circumstance and psychological conditioning that this deeply disturbing novel so brilliantly weaves. Still, it is a novel to be read – but only if you’re feeling robust and reasonably cheerful: this is not a book for a melancholy Monday morning.