I had a lovely big garden back then, narrow but long, street to street, and in there I had flora burgeoning so you’d imagine this was the 100% Fruit Juice rack in a supermarket: Tropical Temptation, Fruits of Paradise, Berry Blaze. The mulberry tree was not one of those miserable struggling things where some bird had aimed at somebody’s nice white bedsheets on the clothes line but missed, this cultivar I got from a nursery, and its fruit was the size of your thumb and sweet man sweet, what tarts it made with whipped cream! This was the original Garden of Eden, hey. Macadamia nuts, litchis, everything, it was all here.

And curiously, with the dreadful drought of the 80s I even had figs and Cape grapes, Hanepoot, would you believe it? Fruit you can no way grow in Durbs. It wasn’t so much the winter rain they needed but the dry summer. In winter I’d drain household water on to them. The bananas and pawpaws were the happiest; we were allowed one bathful of water per day for the whole family, you see, ten centimetres deep at the plug, so it was really perfumed soapy and sudsy by sunset, and this I’d mix up with Dobermann dung and old teabags and potato peels and stuff and bucket it into little dams around the base of each tree. Bananas and pawpaws you can’t really help growing in Durbs, they’re almost what you’d call weeds, only these were real freaks, I tell you, the pawpaws were the size of rugby balls. 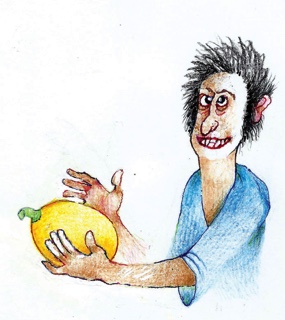 Well, when I’d got enough money together for a fine big prefab double-garage art studio, I took great care not to disarrange this Eden. Elegant white Aylesbury ducks and fat hens roamed the shadows. Dogs lolled about in the sun. Weaver birds hung their baskets from the silver wattle tips, jade vines and orchids clambered all about, the scent was like a Cairo cat-house. I built right up close to a boundary wall. And there one morning I was dabbing away at a big oil painting when what do I see through the windows but a pair of tekkies with ankles cautiously creeping along the top of this boundary wall. I silently go to the big tip-up garage door and peep in the direction of these tekkies and what do I see but the owner of same appear round the end of the roof and lean over and start fondling the biggest pawpaw on my best tree like it’s the bosom of Dolly Parton. He’s so filled with lust he doesn’t even see me. Good morning, say I. I’d like to say he fell off the wall or something, from shock, but he didn’t. Quick as a flash he says How much your pawpaws?

My pawpaws are not for sale, say I. A silence follows. I give them to my friends, say I. Aah, says Tekkies. A further silence follows. You can have one if you like, say I. He leans over to the new end of the cluster and tentatively fingers the small fruit and looks at me. I gesture downwards, he fingers downwards. I gesture further until he’s at the D.Parton one. I nod. Somebody’s got to say something to ease the embarrassment, and it’s not going to be me. He stares desperately around, and his eye falls upon a weaver bird fussing about its nest. Your bird there? says he. No, say I. Why he don’t fly way? says Tekkies. I don’t know, say I, he likes it here I suppose. He LIKE it? says Tekkies. Ja, say I. Why he don’t fly way? says he. I shrug. You made that nest? says he. No, he made it himself, say I. HIMself? says Tekkies. HIMself, say I.

Another silence follows. Why he don’t fly way? says Tekkies. Chrissakes, say I, I don’t know why the bloody bird doesn’t fly away. Don’t you have birds at your place? Do they always fly away? Uuugh, says he, very evil kind mynah bird we got that side, says he. Peck out my father’s eye. Peck it away same time, one shot. He clicks his fingers to show one shot. JEE ZUZ! I cry. Did a mynah really peck out your father’s eye? I mean I have heard say that mynahs have nasty habits and eat the young of other birds and steal the nesting materials of Redwing Starlings and a lot of evil stuff like that, but did this one actually attack your father and peck out his eye? Nooo, says Tekkies, he LIKE to peck it.

Tekkies, say I, please take your bloody pawpaw and piss off or I’ll tell my dog to bite you. And shut the gate behind you.