George Saunders is a celebrated short story writer, so this, his first novel, was eagerly anticipated. It has not disappointed expectations; barring a few mixed reviews, it has been rapturously received, and won the 2017 Man Booker Prize.

I suspect most potential readers will find the title of this novel puzzling: after all, how many people know what the Bardo is? To clear up that mystery, then: the Bardo is, in The Tibetan Book of the Dead, a transitional period between death and either Nirvana or a gradual return to rebirth into a new body.

Of course, that triggers the next question: what is Lincoln doing in the Bardo? The answer to this entails the one historical fact that this extremely fanciful book is based on: Abraham Lincoln’s 11-year-old son, Willie, died of typhoid in February 1862, in the early stages of the Civil War. Lincoln was devastated with grief, and reportedly twice visited the crypt in the Oak Hill Cemetery where the embalmed body of his son was laid. 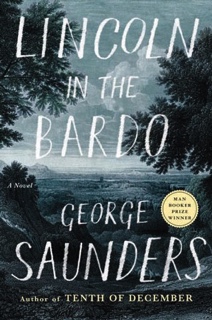 Upon this fact Saunders has constructed an initially bewildering account, narrated almost exclusively by dead people trapped in the Bardo by their reluctance to leave “that previous world”, that is, the world of the living. They refuse to accept that they are dead, believing instead that their coffins are “sick-boxes”, and that they are awaiting their recovery in “this hospital yard”.

They are a motley crew, but the main spokesmen are Hans Vollman, a printer, 46 years old at his death, struck by a beam; the elderly Reverend Everly Thomas; and Roger Bevins III, a young gay man who killed himself when rejected by his lover, who had resolved to henceforth “live correctly”.

The strange fact is that these three speaking corpses are very likeable human beings. The three of them take a particular interest in “our silent young friend”, Willie Lincoln, and the novel recounts their attempt to rescue Willie from the gruesome fate that awaits young children who linger in the Bardo. As Roger Bevins says “These young ones are not meant to tarry”; but Willie believes that “I am to wait”.

When Lincoln comes to visit the body of his dead son, the three conceive the idea of somehow, by “entering” Lincoln, persuading him to allow Willie to let go, and escape from the Bardo. The main concept of the novel, in short, is highly fanciful, indeed not always very intelligible; Saunders’s achievement is to make it, at some level, believable and deeply moving. This may be because his ghosts are for the most part kindly and compassionate, though some of the lesser spirits (and there is a horde of them) are distinctly unkind.

The multi-voiced narrative of the dead is interspersed with extracts from contemporaneous accounts of the incident, constructing a panoramic vision of America at the time of the Civil War. But complementing the historical panorama is a more universal exploration of life, love and death, in terms of the regrets, illusions and hopes of these lost (or temporarily mislaid) souls.

A common fear is that they have been forgotten by those remaining behind; thus the Reverend Thomas wistfully reflects on the survival of the dead in the memory of the living: “What I mean to say is, we had been considerable. Had been loved. […] Our departures caused pain.”

Through the figure of Abraham Lincoln, the novel deals with that pain caused by “departures”; and it is one of the novel’s more optimistic implications that through experiencing the loss of his son, Lincoln arrived at the insight that “the world was full of sorrow, that everyone laboured under some burden of sorrow; that […] therefore one must do what one could to lighten the load of those with whom one came into contact.”

It’s an old-fashioned, perhaps even trite, moral; but Saunders manages to lend it substance through the sheer vitality of his imagination, conjuring up a world filled with sorrow, yes, but also abundant with great joy and beauty. As Roger Bevins recalls the world he so unwisely departed prematurely: “this vast sensual paradise, this grand marketplace lovingly stocked with every sublime thing”. Paradoxically, in this necropolis, the sense of life is strong.

Like all virtuosos, Saunders can be exhausting, his flights of fantasy, as of an imagination run amuck, frequently leaving the reader limping behind. But this is a quibble, in the face of an immensely imaginative and impressive novel.