UPDATE: Survé keeps it in the family

If it still isn’t abundantly clear that the press baron with a thin skin Dr Iqbal Survé (who incidentally blocked Noseweek on Twitter from viewing his account) has turned the Independent Media empire into his personal diary and scrapbook, then the launch edition of the African Independent magazine should clear things up.

This was picked up by Cape Town reader Dave Fair who informed Noseweek via Facebook: “Further to your article on Survé’s self-promotion (nose219: “Survé rides his unicorn up the newsroom Everest”) check out the front cover of the African Independent – Paul Lamontagne on the cover! And Survé’s daughter on the editorial staff! Coincidence?” 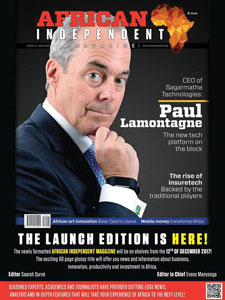 As revealed in nose219, Lamontagne is the CEO of a little-known company called Sagarmatha Technologies which, despite relative obscurity, has enjoyed an unusually large amount of publicity on the front pages of Independent Media’s Business Report since October 2017.

The company is effectively an extension of Survé’s business empire, sharing office space and staff.

The good doctor was a listed director of the company almost from its registration in October 2013 until he resigned 9 October 2017 just days before the company received bucket-loads of free publicity from Independent Media.

But throughout the exorbitant amount of positive coverage that Sagarmatha has enjoyed there is no mention of this. Instead the articles are written in such a form, including editorial pieces, that tries to falsely convince the reader that the articles have been naturally reported in the process of news gathering, free of bias, and hold serious news value.

The African Independent magazine article is no different. However it is slightly more obvious, as the piece is co-written by Survé’s 24-year-old daughter Saarah Survé, who also happens to be the magazine’s editor.

Saarah’s editorial stated: “Lamontagne is embarking on an exciting venture to make his company the leading digital technology platform in Africa”.