Eel technique. Liquor on the road to ruin.

I suppose only a townie could become so enthused about  fishing.

I suppose it’s a reasonable habit, taking fishing tackle on a mountain trip, but come on, man, I mean….  Well, Polly did. She always had such tackle in her boot, trout rods for two, always found her way to some piece of  water, anywhere would do, if only for an hour, and it didn’t really have to be much water either, come to think of it. Polly, said I, I am a rock and surf angler, I don’t really have the skill one could use in dam or river, though I suppose I might manage some phutu on a trout stick with a fixed spool reel. Splendid, splendid, said she in her strange Pommy way of speaking.

So now we’re off to the escarpment, a sharp haul up the Drakensberg. And what’s it going to be, then? I ask – a short stern clamber up Gray’s Pass, and hang around there looking at the view, the whole lot three days, how about that, hey?  Aah yes! she  exclaims in her ladylike manner.  In that case, I declare in an unpolished sort of way, we should take along some whisky for enhancing the sensibilities as the sun sets over old Natal. True, she murmurs, a bottle of something nice.  Two bottles, say I.  Two bottles are a party, says she. Not at all, say I, two people for three days means a sixth of one bottle per day per person, which is ridiculous, and in any case it would be unfair if only one of us had to carry the weight of a bottle. I take your point, says she, in her genteel way, so we’re off to the Bottlestore Galactica for the Vat 69 and the Spar for dehydrated and dry providence, you know, soya protein, Smash potatoes, sundried tomatoes, powdered milk, sweeteners, all things light and airy, except the two bottles of whisky of course, for humping up the escarpment like a pair of mules. 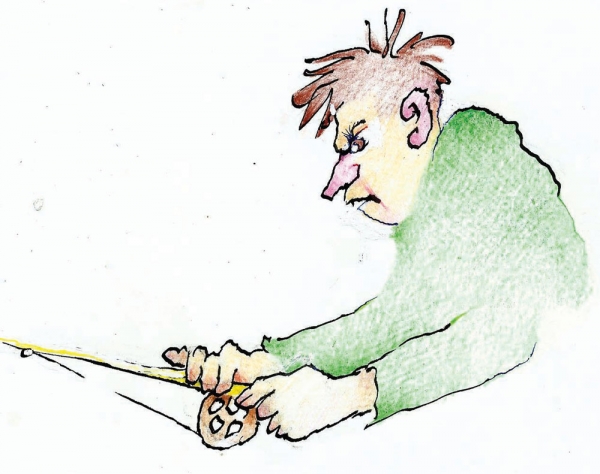 We pull in at an Estcourt supermarket for heavy grub for tonight in the campsite below Mike’s Pass: lamb chops, eggs, the like, and by sunset we’re all rigged up in that really romantic little sylvan grove which constitutes the camping area and a merry braai is sizzling away in the stone grilling place. We’ve cut some grass for a mattress inside the little mountain tent; the sleeping-bags cosily invite us.

An old pal called Woolly suddenly hails me from a biggish group just come down the mountain. I suggest a chop and egg with toast, but he’s already eaten. I suggest whisky, to keep us company while we eat. I have some myself to keep him company while he’s drinking. We have a good old laugh, remembering the time we thought we’d found a corpse in a cave, which turned out to be bedsheets somebody had nicked from the Cathedral Peak Hotel. We remember being snowed in somewhere for two days. We are jolly company.  We drink more whisky.

And more. Suddenly he spies the rods. Fishing! he cries. Have you got a rod for me? There’s no water here, says Polly, but very politely. Yes there is, says Woolly, the Mlambonja River. That’s a tiny little stream, says Polly.  Not at this time of the year, says Woolly, it’s full of eels, delicious, and we’ll catch some and grill them right away!  You may borrow my rod, says Polly.  So we cut up some left-over mutton fat for bait and put the ailing bottle of Vat 69 to a merciful death and jauntily set out in the pitch-dark of the moonless clouded night for the rain-swollen Mlambonja full of eels. We stumble all about, searching, searching, before Woolly suddenly cries Ha! The Mlambonja! and there indeed down a small bank is the river, indistinct in the dark to be sure and a little cloudy with silt from the rains, but eels don’t mind that, they hunt by smell, says Woolly.

We bait up with No.2 surf hooks and a good lump of fat, eels are greedy feeders, he declares, and their mouths are BIG, hey! We put sinkers on a swivel about 25cms up the line, to anchor the bait against the current, and wait.  After a bit Woolly says I think something has stripped my bait, and reels in. The bait is intact, but he professionally feels the sinker for temperature.  Well the water’s quite nice and warm, he declares. Polly has been unusually silent. Wotcher think, hey Polly? says he cheerfully.  I think it’s not a river, it’s a road, says Polly, but very politely.

Distant headlights rapidly advance.  One million candlepower. As the bakkie squashes our mutton fat the driver hoots at us: peep peepeepeepeep peep peep.