Grim picture. Think of the children.

Our president is embroiled in yet another scandal, some nostalgic folk have been flying the ol’ flag, and very disgruntled students have been throwing poo at the police. There’s a large share of anger going around in South Africa – but who has any left to express on behalf of the country’s hungry children?

South Africa has an overwhelming number of families that go hungry each and every day, yet the statistics in full view of the public seem to produce little more than a whimper in the social discourse out there of people going on and on about what supposedly really matters. 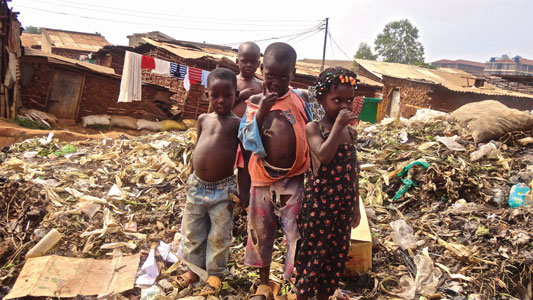 How bad is it, this seemingly entrenched situation of poverty and hunger?

Marianne Merten recently did a stellar analysis of the state of poverty in South Africa, in an article published in Daily Maverick. She paints a grim picture of the country reversing what gains we might have made in the fight against poverty.

The way Merten frames it, while more and more South Africans starve, government stubbornly sticks to policies which aren’t functional, finding it easier to blame the country’s woes on a global economic crisis – as we have seen the honourable President do so many times in Parliament (when he is not laughing at his critics).

According to the latest Stats SA report on poverty trends in South Africa, while poverty decreased overall between 2006 and 2015, by 2015 a distinct rise in poverty was visible compared to 2011. Stats SA defines poverty as having less than R992 (per person per month), and in 2015, by that standard, one in two South Africans were poor.

Consider a working paper by Dr. Stephen Devereux, written for the Centre of Excellence in Food Security (a joint venture of University of Western Cape and University of Pretoria), where he shows that social grants have failed to stop malnutrition. Devereux and co-author Jennifer Waidler ponder the seeming paradox that although food security has improved malnutrition has not been defeated. Instead it’s getting worse

Social grants in South Africa are relatively generous compared to other countries, but they fall short because they are diluted among several family members. According to Devereux, poor families will spend between one-third and two-thirds of their social grant on food; in the case of a child-support grant that amounts to between R130 to R224 of the R360 they get every month.

Many publications in the country, including Noseweek, have revealed unscrupulous actions by grant payment providers such as CPS (and company), that unecessarily and unjustly erode this measly amount. Unethical service providers are exploiting loopholes in  the system – and ordinary people’s trust – to turn the convenience and supposed safety of everyday banking into a perfect storm (SeeRobbing the Poor in this issue). That is nothing short of monstrous and much anger has been aired around it, but the bigger picture of poverty must not be forgotten.

For Devereux, food security goes beyond issues of food production. He writes that poor food access, poor childcare, and poor health services hamper efforts to fight malnutrition. Social grants on their own are not enough to deal with these issues.

Now, there is plenty of research being done and plenty of meetings being held where experts are doing their best to find solutions to these problems. For instance, in November 2017 experts will have gathered to investigate the effectiveness of school-feeding interventions, at a symposium aptly named You can’t teach a hungry child – another event by the Centre of Excellence in Food Security.

There is so much anger being expressed and circulated online about a myriad of things, and I am not one to make light of whatever issues people are angry about. But clearly this particular issue isn’t as important to as many people as I believe it should be.

Here I am anyway, angry enough to be bending your ear to spare a thought for the fellow citizens our country fails every day – the increasing number of children going hungry across the land.