A  River Runs Through It, the mesmerising Brad Pitt film featuring the peaceful grace of expert fly-fishing – and some memorably vicious  punch-ups – neatly duplicates contrasting aspects of this beautiful new book.  Co-author Ed Herbst, like heroic Brad P, is ravished by the joys of fly-fishing  – when he is not flaying villains via his fierce investigative columns in the Daily Maverick and elsewhere.

Fly-fishing? We, the uninformed, have no notion of the serious social influence of these powerful mysteries in South Africa. Apparently fly-fishing tourism and, in particular, trout tourism, underpins the economies of many communities. It is the basis for the country’s growing aqua culture, and thousands of people owe their livelihoods to the fact that many fellow-citizens enjoy hunting fish, using lures of fur and feather. 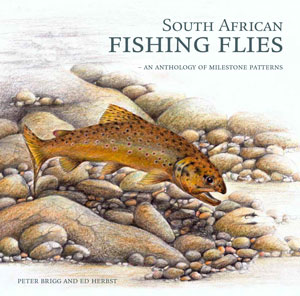 So, it seems, while politicians sink their fangs into each others’ throats and South Africa squelches through corruption mire, some 100,000  fly-fishers ply quiet waters and think long thoughts.  Millions fish for bass and carp, but the fly-ers cast a big tourism shadow.  They have their own magazines, hold  international gatherings, and inculcate a love of angling in their offspring and communities.

In an informative foreword, Ian Cox pays tribute to “a small number of fly-fishers whose vision, passion, skill and commitment” revolutionised the entire exercise in the 1970s. Previously, flies and tackle were generally bought by mail order from Britain.  Those revolutionaries who contributed to the book, or are mentioned in it, created a torrent of developments: fishing syndicates, specialist shops, fly-tying clubs and much else beside. Fly-fishing for other species, such as yellow fish, bass, carp and barbel, took off.

The book is a handsome tome (co-author Peter Brigg is responsible for some evocative illustrations). It is not a history. It is an anthology of personal accounts, cast against the backdrop of the flies that developed during that ’70s revolution.

Warning: It should be noted that, before gentle and other readers rush off, with hook, line and sinker, for the nearest body of water, Cox notes that the fishing sages have warned that it takes 10,000 hours to become truly expert at something. “This book encapsulates a collective wisdom that spans lifetimes and runs to hundreds of thousands of hours”.

It certainly doesn’t appear that our politicians, by and large, are capable of the concept of collective wisdom. Mind you, there were rumours some years ago, during Constitutional birth pangs, that Cyril Ramaphosa and Roelf Meyer had enjoyed a thoughtful piscatorial splash between negotiations. Which sounds vaguely encouraging, should C.R. accede to the crown.

Beginner fisherpersons (PC obtrudes even here) should know that there are sometimes religious overtones to fly-fishing literature. Ted Leeson (Inventing Montana) remarks that fly patterns “bear the stamp of our individual minds. Our theories are impressed with something of who we are, and the choice of patterns we carry discloses something of us”.

Peter Brigg is a freelancer, interested in hiking, photography and art, and is author of the fly-fishing guide Call of the Stream.

Ed Herbst, at age five, caught a rock cod and was hooked for ever. But somehow he has found time to expose the sins of his former employers, the SABC, and sundry other enemies of the people. And courageously continues to do so.