Oh, shit! – I do like your October magazine cover! 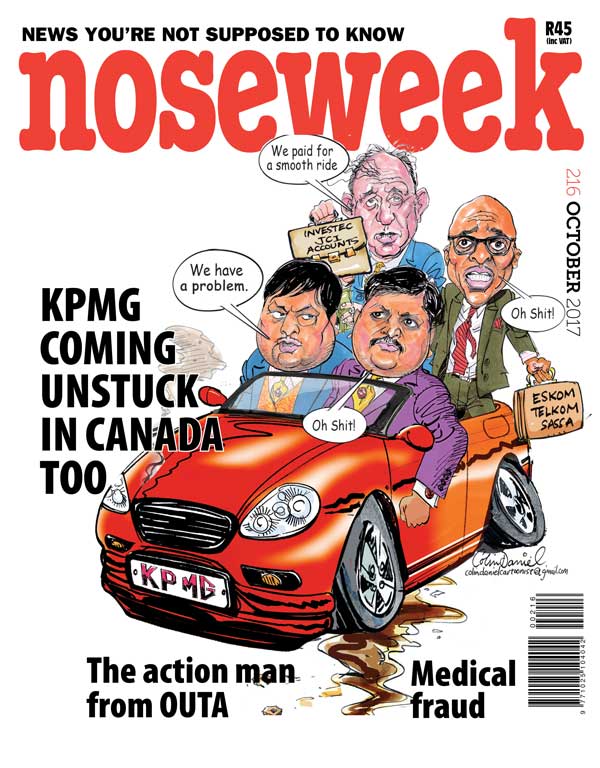 KPMG’s “diplomatic” auditing goes way back.  In the late 1980s I was employed by the Durban City Council’s IT department to convert the programming of the city’s computerised assets register from Mumps to Cobol, a project that took nearly three years. There were so many assets on the register that the printout pile stood more than a metre high. As a result no-one ever read it or knew what was in it; all the auditors wanted was the total.

Durban at the time claimed a world record; it and some city in Canada were the only cities that made a profit every year.  Question frequently asked: why, if they are always making a profit, do rates continually rise?

One way they were doing it was by reflecting every expense incurred not as an expense in their books, but as the purchase of an asset. For example, installed street light bulbs were reflected as an asset; paint used on the roads – those white lines – was an asset. Donkeys they had bought in 1938 were still on the asset register, as were ancient tramlines long buried under layers of tarmac, still valued at cost. Contractors had been hired and paid to dig holes on Dairy Beach for poles to support a new lifesavers’ hut close to the new pier. But they could not reach rock, so decided to erect the hut on North Beach instead. The abandoned holes in the sand on Dairy Beach remained on the asset register, at cost. Under the site where the Tollgate bridge now stands on the N3 highway, there was once a road intersection with robots. Those old roadworks and traffic lights were still on the asset register, although they had been bulldozed away years before.

The council auditors weren’t interested; they only wanted the total that the computer spewed out. When I drew the problem to the attention of the city’s external auditors, they informed me they did not carry out an independent audit; they just checked that the internal auditors were happy and had signed off the accounts.

• Your KPMG report makes one wonder about professional status. No sooner have the accountants been sprung, along comes the South African Reserve Bank to the rescue: KPMG are too big to fail – the large corporate organisations must not ditch their Dutch Uncles.

“When plunder becomes a way of life for a group of men in society, in the course of time they create a legal system that authorises it and a moral code that glorifies it.” – Economic Sophisms, Frederic Bastiat (1801-1850).

What does the Reserve Bank know and what are they attempting to brush under the carpet? Perhaps another quotation might help:

“The few who understand the system will either be so interested in its profits or so dependent on its favours, that there will be no opposition from that class.” And “Let me issue and control a nation’s money and I care not who writes the laws.” – Mayer Amschel Bauer Rothschild, (1744-1812).

Does history not teach us anything?

PS: This is not cricket! Where is Harold Strachan? I don’t recall receiving a leave application – his is the most important article in Noseweek; without it we get withdrawal symptoms. – BM

See The biggest get-even-richer plan in this issue to understand the system – and then Strachan's Last Word to light up your day! – Ed.

Your article (Big Pharma, nose216) about the over-prescription of drugs was spot-on, if our local GPs are anything to go by. I was prescribed benzodiazepine a couple of years ago; a month’s supply plus two repeats.  Since “bennies” are both easily abused and highly addictive, I was careful to make the month’s supply last for nearly a year. By then the repeat prescriptions were out-of-date so I went back to ask, somewhat sheepishly, for a further supply and in a burst of generosity my dealer – sorry, my doctor – upped the dose and gave me another three months’ supply. I mentioned that the product leaflet advised a maximum treatment period of two weeks but he said I was mistaken. I’m a pretty big guy (of Russian descent); I wonder if smaller folk are more at risk than me.

“It is simply no longer possible to believe much of the clinical research that is published, or to rely on the judgment of trusted physicians or authoritative medical guidelines. I take no pleasure in this conclusion, which I reached slowly and reluctantly over my two decades as an editor of The New England Journal of Medicine.” – Marcia Angell, MD, in the New York Review of Books, January 15, 2009.

“The case against science is straightforward: much of the scientific literature, perhaps half, may simply be untrue. Afflicted by studies with small sample sizes, tiny effects, invalid exploratory analyses, and flagrant conflicts of interest, together with an obsession with pursuing fashionable trends of dubious importance, science has taken a turn towards darkness.” – Richard Horton, editor-in-chief, The Lancet, April 2015.

And who can argue with that!

Well done to Namibia; thinking outside the proverbial box is the way to go! SA Ports, SA Customs and SARS will have to catch a BIG wake-up because Nam is busy taking business away from inefficient, bloated, red-tape and expensive SA government-run Ports Authority operations!

If you are a victim of Vodacom’s WASP scam [charges to your cellphone account for junk “content” you neither ordered not authorised] and assuming that the amount is less than R15,000, lodge a claim against Vodacom at the small claims court. Since the police and NPA have done nothing about it for years, Noseweek should encourage everyone to go the small claims court route. If enough people do, Vodacom and friends will have to shut down these scams, because it will cost them too much to defend.

There are no longer ethics in business, only the desire to be rich at all costs; even if it means that innocent people will die. When it comes to our health, we really have to apply common sense: drink water, eat in moderation, rest, but most importantly avoid miracle cures as they simply do not exist.

We need not despair because of Texans’ decision to maintain sanctions against South Africa! By God, The Prophets and CNN, El Nino is going to flood Texas by New Year’s Day, and I will rejoice in the justice of the Laws of God and physics.

Mr Jadwat’s prophecy was only 20 years out, but the residents of Houston may need reminding why the recent devastating hurricane was visited upon them. – Ed.