On fire. Half-life in the cultural imagination.

Dive into Fire Pool at your peril. It’s a plunge into a dazzle of wit, wisdom, erudition (and  a mite of breast-beating). Twidle is in love with language, sparking an appealing kaleidoscope of personal memories, opinions  and impressions. Some pertain to the state of the nation (his musings on the pantomime aimed at justifying construction of the notorious Nkandla Fire Pool is wondrously surreal).

There are echoes of Jack Kerouac’s On the Road and much hero-worship of J M Coetzee’s  oeuvre, but Twidle has a distinctive voice of his own. And he can be both joyously funny  – and dark. 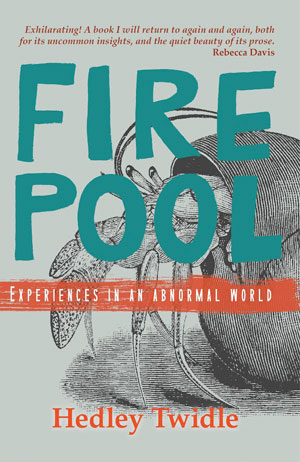 The autobiographical introductory passages, recording the woes and occasional triumphs of a vulnerably pale-skinned boarding school lad, are quite brilliant. He is mercilessly critical of the social and chauvinist aspirations inflicted on “privileged” young minds in the dying days of stiff-upper-lip colonialism. But he managed, despite lengthy, painful encounters with dermatologists and aggressive prefects, to get up to much satisfying mischief.

There is an extended, rhythmically repetitive, tribute to the young pianist and composer, Moses Taiwa Molelekwa, who died in 2001 aged 27. The author writes that he, at that age, was only just beginning “to understand what music meant to and in the country of my birth. I was studying South African literature even while realising that the country’s story was really… mostly encoded in song”.

Another tribute, of a kind, is to the pitiably bemused Dimitri Tsafendas, Dr Hendrik Verwoerd’s assassin. This wanderer, confused by racist bureaucracy, floated between different race classifications and infinite variations on his own name. He “foreshadows the 21st century illegal immigrant who is forced to live an unrelentingly precarious existence between states and borders”.

The first sections of an official report on Tsafendas paints him as a “lone gunman” like Lee Harvey Oswald. But later, according to historian Deborah Posel, there is an attempt “to elevate the enemy into a worthy adversary”, to conjure an unpredictable maverick who acted with foresight and planning. In fact,a long chain of bureaucratic errors and ironies allowed Tsafendas to kill the Prime Minister.

After a “walking residency” with a party of academics including architects, writers, artists and archaeologists, along the spine of Table Mountain National Park in 2015, the group descended to find a changed world. The currency was on the point of collapse because of Jacob Zuma’s decision to fire respected finance minister Nhlanhla Nene. This event feeds into Twidle’s greatest fear: nuclear horrors. Analysts suggested that Nene was fired because he had been stalling a trillion-dollar nuclear option for South Africa, available with Vladimir Putin’s connivance.

Frighteningly, the ANC’s original principled rejection of nuclear power appeared to have been forgotten. We are reminded that, when Koeberg opened in 1984, the entire population of Cape Town was given iodine tablets so that, in the event of the northwesterly winds wafting poison plumes across the city, the tablets might help to alleviate the threat to human thyroid glands.

The city’s chief health officer at the time accused Eskom of “absolute naivety” and moved out of the metro in protest. Twidle says: “The question of nuclear, it seems to me, lives a kind of half-life in the cultural imagination”.

Ah well: at least he has a sense of humour. Of a kind. And the longest list of  acknowledgements to friends and advisers this side of the Okefenokee Swamp.