Sanlam replies to charge it does not love dogs

The article, “Sanlam does NOT love dogs” (nose214) contains several inaccuracies and casts aspersions on the reputations of Sanlam, the trustees and legal representatives appointed as executors of the estate of the late Mr Jonathan Edwards.

Sanlam, its trustees and the appointed executors of the estate are legally bound to act in accordance with the law and the Last Will and Testament of Mr Edwards.

In our common law, a Memorandum of Understanding such as the one drawn up by Mr Edwards and Ms Marguerite Petherick does not supersede the Last Will of the deceased. Any agreement in terms of which the contracting parties purport to regulate the devolution of the estate after the death of one of them is invalid. Sanlam acted in accordance with this principle.

Ms Petherick’s allegation that his Last Will was “lost” by Sanlam is false. Sanlam’s Fiduciary Department was instructed to amend the Will, which was done. Unfortunately Mr Edwards never lodged the amended Will with Sanlam for safekeeping. No valid Will made by the deceased was found other than the one already in the possession of Sanlam. The wording of the bequests in the purported amended Will did not differ significantly from the original and would have no bearing on the claims of Ms Petherick.

In terms of Mr Edwards’s will, proceeds from his estate were to be placed into a trust with instructions for his Trustees to look after the general wellbeing of the dogs. On the death of his pets, Mr Edwards stipulated that the balance of the funds should go to two welfare organisations – one of which was the Animal Anti-Cruelty League. It was not indicated where the dogs should stay and who should look after them. It was however stipulated that his dogs, Hector and Maggie-May, should not be separated after his passing.

During the process of administration, it was found that the estate did not possess sufficient liquidity [cash] to pay all administration charges, a mortgage bond and other liabilities. The sale of the property was necessary to honour all financial obligations – and to make provision for the care of Mr Edwards’s pets, Hector and Maggie-May.

Fees paid for winding-up of the estate are fixed at an amount of 3,5%; and the proceeds of the Liberty Life policy were indeed paid into the estate and are reflected in the liquidation and distribution account.

The executor of the estate discussed the matter with the Animal Anti-Cruelty League (50% beneficiary of the estate) who undertook to accommodate and care for Mr Edwards’s dogs.

Sanlam has acted in full accordance with the law. In addition, the executors and trustees have engaged extensively with all parties concerned to ensure that last wishes of Mr Jonathan Edwards are honoured and to ensure that both Hector and Maggie-May are well cared for for the remainder of their lives.

Sanlam recommends that when people draft their last will and testament, they engage with a professional financial planner or legally qualified person in order to make sure their wishes are practical and capable of being implemented. All of their final wishes must be recorded in their Will.

Attached to Mr Samuels’ letter, was a copy of a recent letter from Sister Cindy-Lee Price, General Manager of the Animal Anti-Cruelty League in Johannesburg. In it, Sr. Price thanks the trustee of the late Mr Edwards’s estate for informing the League about Hector and Maggie-May, his Bull Terriers, and for providing the League with a copy of the late Mr Edwards’s will (in which the League would have discovered that they are to be heir to half his estate, currently estimated at more than R1 million). 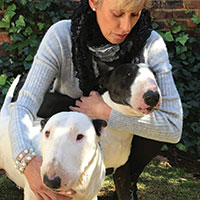 “As per his wishes, we are more than willing and able to look after the dogs should they be placed in our care. They would be kept together in their own space, with access to our staff throughout the day and our veterinarians are on site 7 days a week,” Sister Price wrote. “They would live out the rest of their lives with us, as per Mr Edwards’s wishes.”

Noseweek will be following up on various aspects of this story. For now, all we wish to note is that a caged run in the Animal Anti-Cruelty League’s yard was clearly not what Jonathan Edwards had in mind for his beloved and pampered pets. His Sanlam trustee acknowledged as much by keeping them at their suburban home for 18 months after Edwards’s death, as he had wished. See our next issue. – Ed.