By the mere age of seventy I had become Durbs’s ace art restorer, you see, in which capacity I had now arrived at Pixley Arts, down the beach end of West Street, and there come upon an old schoolmaster from Maritzburg College days examining certain watercolour paintings of the Drakensberg in the Pixley gallery window.

Ha Strachan! said he. How do you remember my name after so long? said  I. Because you were always so impudent, said he, and wrote with your finger in the dust on my motor car Pinch-Arse old Pee. You may remember it, a 1936 Hudson Terraplane, dark bottle green, so the writing showed up clearly. You also used to do sarcastic drawings of the staff which you would then circulate amongst the boys, including one of our Latin Master, in suit and tie and riding a bicycle with a 12-bore shotgun tied to the frame and off to shoot guinea-fowl, as was his habit. In the staff room we conferred on disciplining you, but headmaster Froggy Snow refused to cane your backside lest he appear a bad sport. The staff then felt that fact itself was evidence of your being manipulative, and the prefects hesitated to do the job lest they get mocked too.

Bad old days, said I; would you like to meet the gallery owner? Aah, said he, and shuffled over a bit. He thus shuffled because next to the art gallery was a cathouse name of the Adult Movie and Love Aid Centre and it was their prospectus he had been examining the while and not the watercolour landscapes at all. Would you like to meet my friend Tienkie who runs the Centre? say I. The art shop? says he. No, the sex shop, say I. No, says a new voice, and I realise he has a lady minder in a nurse’s sort of outfit, because he’s now exceeding old. He doesn’t like places like that, says she. Yes he does, say I, and take his elbow and steer him inside. 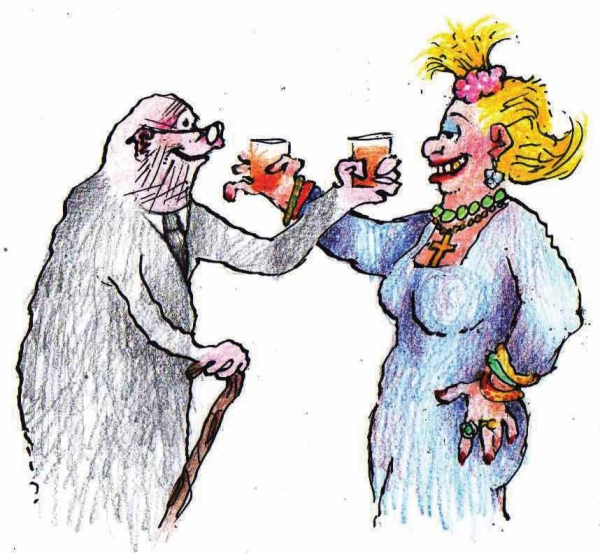 Hullo Dearie, says Tienkie, I got a lovely video just come in, dubbed in Afrikaans for the Christmas Gauties, called Blou Bul Tjierpoppies, just nice for the mature man, hey? The poppies are all Chinese, but never mind. You should see them in the shower. Which, I ask, the Tjierpoppies or the Blou Bulle? No, man! says Tienkie, they all in the shower together, like.

You know, I have recently turned ninety-five years of age, says Dearie. Is it? says Tienkie, just nice and mature hey? Yes, says he, reflectively... you know, if I’d known I was going to live so long I’d have taken better care of myself. Well you can start now, says she; did you got good DVD goeters? I have an automatic radiogram and a television set, says he. Goeie genade! says she. I think we’ll just steer across to the Tudor House Hotel and get a good stiff shot of whisky, say I; want to come too? Ooo yes! she cries, and signals her departure to somebody to run the Centre.

Though I have been as sinful as the next man, says Dearie along the way, I have nonetheless maintained a creditable moral standard, which I should try to maintain even at my present age. Dilly old idiot, think I to myself, you scorn that which would save you from senile dementia. Dearie, says Tienkie, if you didn’t worked out for yourself how to grow old disgracefully, one of these days when you decease you will find yourself floating about the sky with a whole lot of fucking Christians with their toes all dangling down and smiling at each other all the time and no sex, no booze anywhere around and loving their enemies evermore.

So we steer Dearie across the street to the Tudor bar and settle the minder in the reception foyer where a waiter keeps her stupified with Coca Cola, whilst inside there I order triple-scotches though the rules of bar-keeping say doubles are the maximum, and after the first triple he says You know, I feel as if I am only sixty years old. Well maybe after another triple or two, says Tienkie, you will find yourself doing rude things with pimply schoolgirls in the middle of the rugby field at midnight.

Silence ensues. Then after some quiet smiling at these new Verities of Life Dearie rather irrelevantly asks Well was it you who used to write things on my motor car? Who me! I exclaim, why should I do such an antisocial thing? Because I see this is still rather your style, says Dearie. I shake my head.

A cab-type taxi suddenly appears with the minder inside and whisks off the sixty-year-old Dearie. Sweet ole uncle, says Tienkie. What’s his name? Nee, God weet, ’ksê. I think it’s Hinchcliffe or Braithwaite or something. Innocent, laaik, says she. Ja, say I, it’s darem hard to score almost a century without the Great Umpire in Earth Orbit noticing your sins.