This judicious biography ought to be required reading for the ANC hierarchy. As the party writhes in long overdue introspection, it might profitably pause from breast-beating in order to ponder lessons arising from the extraordinary life of Pixley ka Isaka Seme. 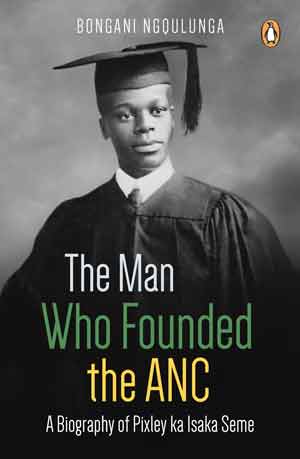 Bongani Ngqulunga has written an exemplary biography, properly researched, warts-and-all honest, and elegantly presented. It is the tale of a remarkable shooting star who, sadly, fizzled after brilliant beginnings. Seme, the clever mission school pupil, gained international attention in the early 19th Century for his advocacy of African regeneration. From a modest and obscure rural background, he managed, with a little help from the American Board of Missions, to study successfully at Columbia University and then Oxford, and qualified as a barrister-at-law.

After completing his BA, Columbia’s 1906 yearbook notes of Seme: “His face dark, but his mind brilliant.” In a profile published in the New York Times he said: “I have tried to learn those things that will benefit my people and enable me to help them as I should.” Seme’s speech, The Regeneration of Africa, was his contribution to an annual public speaking competition run by the university. Two rivals spoke on The Future of Russia and Reform in American Politics. Seme won the gold medal.

An excerpt from the speech: “The brighter day is rising upon Africa. Already I seem to see her chains dissolved, her desert plains red with harvest, her Abyssinia and her Zululand the seats of science and religion.” His triumph was widely reported across the United States. In South Africa, the newspaper Ilanga lase Natal headlined “A Famous Zulu”, while the English edition simply stated “A Zulu Wins a Prize”.

Seme was a student at Oxford from 1907 to 1909. Records suggest that his relationship with the university was “rather distant”. Much of the information on his Oxford life was sourced from letters he exchanged with Alain LeRoy Locke, an African-American Harvard graduate who was the first black winner of a Rhodes Scholarship. Seme was of the view that the future leaders of the African continent were being educated in Britain at that time. He often entertained Locke at his rooms in Oxford.

In 1910, Seme returned to South Africa. The teenager, who went abroad hoping to be trained as a teacher and missionary to the Zulus, had become a Pan-Africanist whose concerns extended beyond his home community of Inanda. Ilanga lase Natal proudly noted that Seme was the only black person in the country who not only had a BA degree but was also a barrister.

Soon he became involved in politics. In 1911 he issued a call to black leaders throughout the country and the neighbouring protectorates to unite and form what he dubbed the South African Native Congress, or simply the Native Union. Differences between black people should be forgotten: “Those divisions, those jealousies are the cause of all our woes and of all our backwardness and ignorance today.” But he acknowledged the difficulty of establishing a united organisation which drew support from elements representing “different tongues and tribes”.

The year 1912 was highly exciting. The dream of black political unity was being realised through the formation of the South African Native National Congress, (renamed African National Congress in 1923). Seme’s reputation as a lawyer was spreading, he had founded the Abantu-Batho newspaper, and, highly significant, the Native Farmers Association of SA Ltd had been launched. White farmers protested that it was “inimical to the interests of the white population that natives or syndicates should acquire farms”.

But personal woes eventually humbled Seme. Ngqulunga notes shifty financial arrangements in legal matters. And the man who had founded the ANC as a 30-year-old, eventually failed as a president of the organisation. “But his missteps… cannot and should not eclipse the fact that Seme was – and indeed remains –a towering intellectual and political figure.”

Seme died in 1951. The estate was practically insolvent.