The annual export of mutton from New Zealand is 34,380 tons per annum, declared Miss Ootle. Miss Ootle was our teacher, see, this was Geography and somehow relevant to the patchwork education my friends Barkle and Torpid and I were engaged in. Our personal focus at the age of ten, however, was How Things Work. How indeed it had been for our earliest ancestors, hunter-gatherers, basic to survival itself, and presently our problem was one of aerodynamics: whether a fly lands on the ceiling by a half-loop or a half-roll. This may seem a petty thing to the earthbound, but it had been the obsession of aviators ever since 1908 when some daredevil first looped-the-loop without falling out of his flying machine or the wings coming off. We gave scarce a fig for New Zealand, the mutton or Miss Ootle.

Barkle and Torpid were twins. I found their names strange, to start with. I mean Barkle was unusual enough, though possible, but Torpid was just plain ridiculous, man! Turned out they were actually Michael and Norman and they both had adenoid problems. Wududwe sdigga big flar or subbig odda sbord plade foad egsberibed? said Torpid.

And that’s what we did. The plane had to be truly small even for a big fly to power, one of those huge grey things that lurk about garbage dumps and lavvies and disgusting places. One such beast Barkle had captured and stuck in a cage carved from a boiled and expanded Champagne cork, cunningly hollowed like a dugout canoe, with dressmaker’s pins stuck down top to bottom for prison bars, at which the captive now furiously flung himself, bruised and exhausted. His hok was placed in a quiet corner of Barkle’s desk with a piece of jam sandwich  to build up reserves of energy for the flight.

Constructing the plane fell to me.

(i)  Dissolve piece of somebody’s celluloid toothbrush in acetone. Put to on 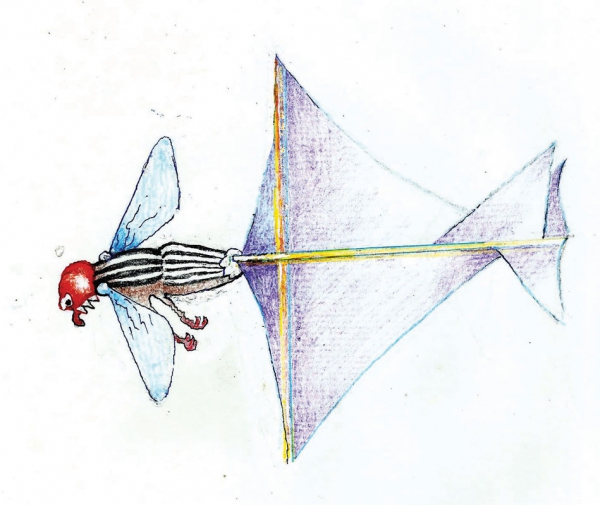 (ii)   Split stalks of dry grass and lay out shape of plane on greaseproof paper, stick all together with quick-drying office gum.

(v)  Carefully place single drop of gum on bum of shitfly, place nose of aircraft on this. Hold by legs until gum is hardened.

(vi)  Allow shitfly to run to edge of school desk and take off as from aircraft carrier.

By this time Miss Ootle had moved on to History. She had old grey photographs of the upper and lower churches of

Assisi, and primitive colour slides from the frescoes inside, of St Francis talking to birds, all of which she shot through a primitive epidiascope on to a white bedsheet pinned over the blackboard. Noticing that we all had our eyes rolled back she assumed we were communicating with St Francis at the right hand of Jesus. Even a great big fly is a pretty unnoticeable thing way above one’s head, see, and the aircraft was transparent anyway, so she hadn’t become aware of the aerodynamic research and stuff going on. But after a minute or so of desperately clinging to the ceiling with the full weight of the aeroplane on its tochis the fly gave best, stalled and spiralled down to the beam of the epidiascope, where it flung about hypnotised until spinning out of control on to Miss Ootle’s skirt.

Of course she became enraged and sent us to Mr Parkinson, the headmaster, who said if we had been thirteen, he’d have beaten our buttocks with his cane. About this menace too we gave scarce a fig. ’Twould hurt no more than falling off one’s bicycle, surely, thought I.

I supposed those campaigners are right who say it is an assault on a child’s dignity and very traumatic, though it wasn’t nearly as traumatic as getting chased by fat old Konstabel Freddie Morris on his patrol bicycle either, for riding one’s own bike backwards on a public road. And besides, Mr Parkinson seemed to lack concentration on his task. Well how does it land on the ceiling anyway? he inquired when the reprimands and menace were over.

Barkle and Torpid being incomprehensible to all but their mother and me, it fell to my lot to explain. Actually, sir, said I, it neither loops nor rolls. Near

the ceiling it builds up a quick turn of speed by vertically diving like a Stuka, then climbing vertically until by fine judgement it reaches stalling speed exactly at the ceiling, whereupon it

extends its forelegs and sticks on with sticky stuff and hauls its hindparts up behind. But not if it has the mass of the aeroplane behind it, surely? says Mr Parkinson. Exactly, sir, say I, that’s why it spun in and fell on Miss Ootle. Of course, of course, says he.

Excuse me, sir, say I, do you know how much mutton is exported by New Zealand every year?