David Cornwell (alias John le Carré) owes an enormous debt to his lying, cheating, seductive father. And so does the vast international fan club who hunger insatiably for the latest tale from the man who wrote The Spy Who Came in from the Cold. 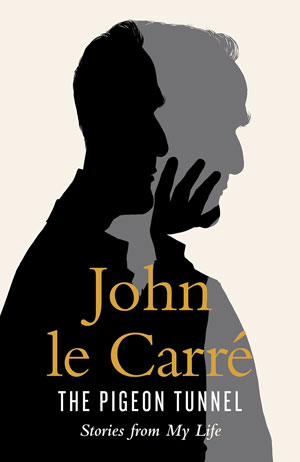 The Pigeon Tunnel (you will need to read the book for the sinister explanation of the title – sorry, no spoiler) is a brilliant autobiography, in which the begetter concedes that the criminal exploits of his crooked Papa and his pals provided profound insights into the minds and motives of rogues, and were often palimpsests for the vivid characters who populate his books. His readers are now introduced to some of the actual individuals who informed these creations.

And what a gallery it is. From the vantage point of a modest diplomatic career, with a sideline in espionage on behalf of Her Majesty’s Government, young David Cornwell, gentleman charmer (unlike Daddy), kept incisive diary notes of his encounters with the great and the good. Also many rotten, deluded and flawed specimens, in unforgettable variety. There are echoes of Dickens in his extraordinary range of understanding and tolerance.

The autobiography, presented in more or less chronological sequence, is an entertaining lesson in successful communication. Cornwell is clearly a courteous, kind and witty being, a raconteur of note, patient and honest to a fault. He listens intently. And he can build an atmosphere conducive to confession.

He is at pains to point out that he is a teller of tales, a creative being, not a spook. Yes, he worked behind the Iron Curtain (partly because he is an excellent linguist and was able to debrief prisoners of war). But despite these continual denials, the public chooses to believe that he is, or was, a professional spy.

The lonely boy, dumped in boarding schools by neglectful parents, is now an urbane adult who relishes life, having survived tough divorces, and general wear and tear, to achieve latter-day aplomb.

Father Ronnie lived to admire his boy – and tried to wangle a cut of his lad’s royalties from the blockbuster movies and best-sellers.

Pigeon Tunnel offers a plethora of close-up encounters with notabilities and glitterati from prime ministers to movie stars. No gossip columnist could rival the serene observation of the great novelist, as he tucks away, for literary purposes, the foibles and fables of the passing show.
His portrait of film and TV actor Alec Guinness, who portrayed arch spy character Smiley, is as subtle as the performance. They understood each other, and revelled in atmospheric nuances and hints.

Notable items include a distressing encounter with the ailing Prime Minister Harold Macmillan, chats with gangsters, an ex-Guantanamo prisoner. The list is endless, and so is the satisfaction in seeing the world through the eyes of a wise, humorous being who had a rough start, but defied the odds to reach a triumphant maturity.

Interestingly, he says that, lacking suitable early role models, he borrowed the manners and attitudes of his “betters” at school and university. A self-made man then. And a sparkling job he made of it.

He reminds that a peaceful political transition looked virtually impossible, with both sides poised to take up arms. As director-general of the Department of Constitutional Development, Barnard played a key role in drawing up the Constitution. Early cloak-and-dagger meetings with the ANC are revealed – and with the Russians in Moscow.

And now for something completely different: The Life of Worm & Other Misconceptions (Kwela) by Ken Barris promises light relief from dark espionage.

Novelist Barris has produced a collection of whimsical short stories. The title tale refers to a dog named Worm, there is a solemn encounter with a baboon in the kitchen, and human frailties are revealed in domestic context.