Vultures delay transfer to wrest rightful ownership from centenarian and his family.

The legal transfer of a piece of land occupied by nine goats and a centenarian appears as if it is being deliberately and collusively delayed by a politically connected condom dealer, a parastatal chairman and the Department of Rural Development and Land Reform.

A glance at the facts can only lead to the plausible explanation that the property owner and the department are waiting for the 103-year-old Zabalaza Mshengu to die.

It is a most unequal battle.

This land-claim case is like no other. It is not complex at all. There is no dispute over whether Mshengu has a right to ownership of the land and there is no other third-party claimant on the land.  The graves of his father, mother and children are on the property.  He was born on the property on 11 January 1914. There is a paper trail.

Mshengu is a labour tenant which is defined as a person who worked on a farm in return for the right to live on the farm and instead of a salary, took a portion of land for themselves. He was officially declared a labour tenant in 2007 on the farm near Ashburton, outside Pietermaritzburg. But if he dies before the transfer, the farm owner may be legally entitled to evict his family within 12 months.

Mshengu lodged his claim for the five hectares before a 31 March 2001 cut-off date in line with the Land Reform (Labour Tenants) Act 3 of 1996 which was designed to give tenure to labour tenants. Only 22,000 claims were lodged countrywide.

But now, with little action from the department over the past 16 years since his lodgement, for the second time Mshengu – through his pro-bono attorney Muzi Mzila – has been forced to compel the department and the landowner, Shockproof Investments 71 (Pty) Ltd, to court. In a notice of motion lodged at the Land Claims Court in Randburg, Mshengu has asked the court to order the buyer and seller to agree to a selling price and that the matter should also go to trial.

Shockproof Investments 71 is jointly owned by Dr Nomsa Dlamini, Roshan Morar and his wife Jyoti – and they are anything but not connected to the ruling elite. Their company has owned the farm since 2006. In 2012 Dlamini, who counts the plush Hawaan Forest Estate in Umhlanga as home, struck a multi-year deal for the “supply and delivery of male and female condoms to the Department of Health” valued at R37 million.

Dlamini’s company Sakhiwo Health Solutions was also credited on 31 March 2017 by the Daily Dispatch with the construction of the R1.9-billion Cecilia Makiwane Hospital in Mdantsane, Eastern Cape. This contract award by the Eastern Cape Health Department, plus a further 37 other cases, were found to have been awarded irregularly in a 2010 forensic report buried by the department and only unearthed in a police investigation in 2012. The police have since arrested several Eastern Cape health officials who have in turn incriminated former provincial health MEC Nomsa Jajula.

Roshan Morar is currently acting chairperson of the embattled Airports Company of South Africa (Acsa) which is still gripped by a corruption scandal that erupted in November last year and involved the CEO, Bongani Maseko (noses206&211). He also runs an accountancy and audit firm in

Pietermaritzburg, Morar Incorporated. When Morar launched his Durban branch in February 2016, among his guests at the Maharani Hotel were ANC Treasurer Zweli Mkhize and his wife Dr May Mashego.

In contrast to the high-roller owners’, Mshengu’s five-hectare property comprises four informal dwellings and  a corrugated iron enclosed braai area as well as a goat shed, no formal services and a small river running on the boundary.

Across the way is the Ibhubesi Industrial Park owned by Cenprop. Farms along or near to the N3 such as Mshengu’s have become increasingly valuable for warehousing and logistical hubs.

“I have lived on this farm since birth and currently share my home with my son Bhekise Mshengu (51) and my grandsons Senzo (37) and Mduduzi (35).  Senzo earns R1,500 and Mduduzi earns about R2,000. I was mostly remunerated in kind that, in consideration of labour I was providing, I was allowed to reside, grow crops and graze livestock. My father also provided labour for Edwin Hardman (the previous owner). He was also paid in kind,” said Mshengu in an affidavit filed in support of the notice of motion.

In May 2011, with the support of the Pietermaritzburg-based Association for Rural Advancement, he brought an application in the Land Claims Court asking for an order directing the state to process his application for the acquisition of the land. 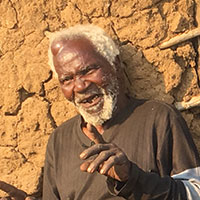 Judge AJ Sardiwalla was so concerned about Mshengu’s age he asked for the matter to be expedited and, if no middle-ground could be found between the buyer and seller, to immediately return to court.

It was only in November 2014 that a valuation of the property by Unique Property Valuers placed its market value at R950,000.

The department dragged its feet for a further two years. In September 2016 Thabile Mzila made an offer to the property owners for R221,460. Two months later they responded through their attorney PM Shabalala, saying they believe “a fair compensation should be around R500,000”.

It is this deadlock, the department’s ineptness to find a solution with the buyer or to return to court, that has forced Mshengu back to court.

A court date has yet to be set.