The fate of the gargantuan multi-million-rand luxury apartment block on Durban’s Berea that was ordered to be torn down by the KwaZulu-Natal High Court in June 2015 (nose190) still hangs in the balance. The demolition order for the part-built nine-storey structure has been taken on appeal to the Supreme Court of Appeal by the developer, Serengeti Rise Industries, supported by the eThekwini Metro Council which irregularly granted permission. The Council faces a huge damages claim  should the building have to be demolished. 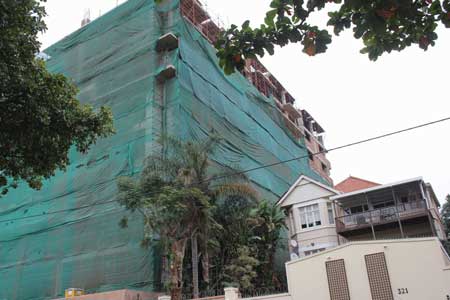 The appeal was argued in the SCA on 10 May, with lawyers for the neighbouring residents opposing.

In their heads of argument the applicants admitted that the building was constructed illegally but claim the demolition order was unfair and unjust – while the neighbours on the other hand were just short of wanting to provide the dynamite sticks to reclaim their views of the cityscape, ocean and Greyville Racecourse.

In the respondents’ heads of argument presented by Nazeer Cassim SC they maintained that “the conduct of both appellants is highly irregular and may well warrant criminal investigation”.

“The town planning section of this Municipality has been captured…  The court cannot countenance unlawful and deceptive conduct [by Serengeti] and thereafter furnish it with an opportunity to remedy the difficulties in which it finds itself by referring the issue of rezoning back to the Municipality. [Serengeti] is the architect of its own misfortune and must bear the consequences,” said Cassim.

The half-built nine-storey building was supposed to comprise 12 luxury apartments complete with a car lift. Serengeti claims it has already spent R61m on the project.

However since the Durban court ruling in  2015 all work has stopped at 347 Currie Rd, Musgrave.

The aggrieved neighbours to the “monstrosity” had successfully convinced Judge Esther Steyn that they were deceived by both the city and the developer who, instead of making information available to them, went to extraordinary lengths to keep their plans secret.

At the heart of the dispute is that the site’s zoning was changed from a GR1 code covering 1,860m2 to a GR5 which allowed the building’s footprint to cover 9,786m2 without proper consultation. A further deviation to the plans was also approved without neighbours being served any notice.

In August 2010 Serengeti’s four-storey plans were approved by council. Then in December 2011 the ANC-led majority council approved a zone- change for the same development, to GR5. The developer then submitted a deviation plan, seeking to increase the building’s bulk as approved on 6 March 2014. In the interim, it had gone ahead without approved plans. By 18 March a two-storey structure, with foundations to support eight storeys, had been completed.

Judge Steyn found that the manner in which the city handled the development’s irregular construction was no error and that the rezoning was “not achieved by due process, nor was the rezoning in accordance with the applicable law”. She said the Durban municipality was compromised and therefore they couldn’t be trusted to fix their mess without bias. Judge Steyn said this had left her no choice but to order the building be torn down.

Acting for Serengeti on appeal, Chris Loxton SC said the judge had erred and usurped the city’s authority.

Loxton said even though Serengeti had informed the Durban court of proposals to “remedy the illegal structures”, Serengeti maintained that they did “not act in contravention of any law or approval” as the “approvals… were valid at the time”.

“In consequence, the construction of the building on the properties was prima facie lawful when undertaken”, said Loxton.

Loxton said if the court still believed the approvals were irregular then the city should start the process again for approval to be obtained.

Loxton said Judge Steyn had failed to prove why the building must be demolished.

eThekwini Metro described Judge Steyn’s ruling as “fundamentally mistaken”. While the city admitted that proper notice of the rezoning was not given and sections of the Building Standards Act were not complied with, Judge Steyn “ought to have referred the matter back to eThekwini for reconsideration and proper notice as required by the Ordinance”.

eThekwini counsel Gilbert Marcus SC said the respondents had been aware of the rezoning in May 2010 and, in any event, as of April 2013 should have seen that the building “going up before their eyes was… clearly outside the constraints of a prior GR1 zoning approval.”

Calling the demolition order “draconian”  Marcus said even if the deviation order and rezoning decision were invalid the court “failed to pay any regard to the rights and interests of the parties who had purchased units in the building”, contractors, and the extent of the work done.

The city asked for the appeal to be upheld and for the court to allow the city to review the approval of the building plans. 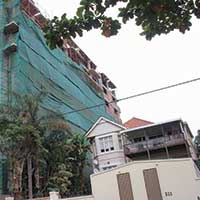 But Cassim said the city’s hands were “tainted” for failing “to exercise supervision over the development”.He said city officials had “perpetuated the illusion that a four-storey development was contemplated” and frustrated access to plans and to the documents required by the respondents.

“[The developer] even before making the application for rezoning attempted to sell apartments off-plan the size and extent of which were clearly not possible on a GR1 zoning. The spectre of collusion is a very real one.

“The prejudice to residents of the surrounding area and the broader environmental impact of a monstrous development far outweighs the limited prejudice which twelve affluent owners of these over-extravagant units stand to suffer,” said Cassim.

Besides asking the court to uphold the High Court order, Cassim asked that a time frame be mandated for the building to be torn down.