Barbel. By any other name

Well it’s seventy-four years since I last had any use for Latin grammar but I do remember, sort of, that carpe is in the imperative mood of the verb “to seize” and diem is the accusative case of a noun “the day”. Carpe diem. Seize the day. Gather ye rosebuds while ye may. But my old angling buddy Baruch says he knows Hebrew grammar and insists in Hebrew diem is the verb and carpe is a fish. Seize the carp, see? All this he knows because his old folks came from Lithuania where at Yom Kippur time they don’t break their fast on American turkeys and English hams and Christmas things, what they eat is carp because in old pre-fridge days you could schlep this fish all the way from Marijampole to Panevezys in a wet sack and it would stay alive for a whole day and two nights, all fresh and juicy for the breakfast oven.

It’s not just that he’s applying Hebrew grammar to Latin words. His problem is, he never learned how to cook these carp. Well why don’t we try a nice Louisiana gumbo catfish recipe instead, say I, delicious, spicy, romantic, Cajun, and there’s plenty of barbel in the Midmar Dam, which is to say catfish.

Never! declares ol’ B. A fish must have scales, as an edible animal if it has cloven hooves must also have horns. Well I’ll tell you what, say I, I’ll fish for barbel and you fish for carp, and if we end up with only a barbel I’ll fillet it and tell you it’s carp. Har har, says he, and unsmiles at me. What’s with the scowl, mensch? say I, if the Pope in 1566 could declare hippopotamuses fish on ritual Fridays in Mozambique, because his missionaries couldn’t go near the rivers for fear of crocodiles, then surely you can do a little bit of conjuring on a li’l ol’ innocent barbel. 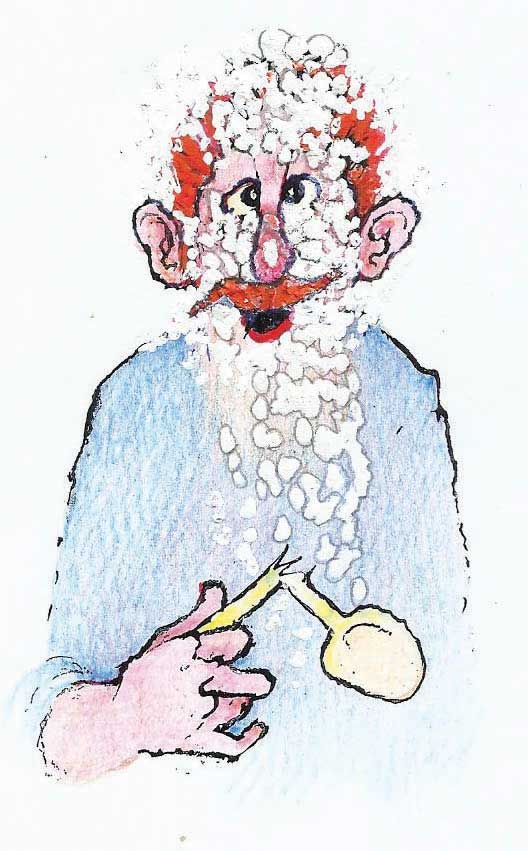 Well that’s why popes can get stuffed, says Baruch, and why they go to Hell when they die.

But we put our minds to it, we go to the internet, and lo! there it is. Chinese. You wouldn’t believe there were so many carp mutations, even goldfish are carp, and if you want a recipe for stirfry goldfish here it is in the stirfry department, along with the snakes and tortoises and stuff. Click click click with the mouse and ha! Chinese Steamed Carp: sage, celery, onion, black pepper, baking powder, horseradish, chillies and a satanic sort of steaming tower, one bamboo sieve piled above another. We brace up, haul down our freshwater tackle from the rack, cook up mieliepap stiff stiff for bait, half mixed with custard, half with Marmite, a deadly menu, and would you believe it, there in Gorima’s Indian Spice shop is exactly the right Chinese steamer, as described: a big pot for boiling water and interlocking bamboo trays above.

We poet voet in die hoek for Midmar. The water’s beautiful, not too cold, but a little brown from recent rains, dead right for barbel which feed by feel, while the custard phutu is for carp which go by scent. We know our craft, all right, and ere long we get our first strike; Baruch does, wham! and he’s up and down the bank ten minutes wrangling this monster to the net. And ag shame, hey, it turns out to be a barbel, a beaut by my reckoning but an abomination in the eyes of Baruch and the Almighty.

Never mind, says he, it will do for the cat. So we don’t chuck it back, and just as well, because we catch boggerol else all day; back home I take the barbel to the outside tap and skilfully skin and fillet it and the cat be damned. Back in the kitchen I position these fillets artistically on a big plate to see what the sight of such beauty will do to Baruch’s ethics. It’s carp, say I.

He falls silent. Are you sure? says he. Aah yes, say I. He rigs up the carp-steamer with a litre of oil in the bottom part and sticks it on the stove with the fish one storey up whilst he makes with the herbs and flavourants in a pot of water. When blue smoke issues from the boiling oil he flings in the pot of water with fish and herbs and there’s a moerse superheated steam explosion, the oil is vapourised and ignites and a great ball of flame roils up ceilingwards. I dive for the fire extinguisher, the woman next door screams, the pit bull creeps under a couch, Baruch blinks through a coating of something which appears to be granulated styrofoam but is in fact barbel paste.

I think I got it the wrong way round, says he, I should have put the oil into boiling water. That’s only the beginning, say I. You monkey with the Almighty’s diet like that ou maat and you’ll soon find yourself in Hell with all those popes and that dreck.