DIY. Build your own pyramid

Now, it is quite a while since I taught a bunch of art students about the Giza pyramids and the great debate over how they were built. Was it by constructing a mighty long ramp for a million slaves to drag up two-tonne stone blocks on sledges? For a Giza pyramid to be built in 20 years the blocks would have to be laid one every five minutes of daylight to make up the 1,051,200 total, and that means 50-or-so blocks on the ramp at any one moment, which mass would cause the ramp to collapse entirely if it was made of sand.

But if it was made of stone there would be more stone in the ramp than in the pyramid by the time they got to the top, and what did they do with all those rocks afterwards? There’s no sign of a dump anywhere. A spiral ramp, maybe? You can’t imagine the clutter, you’d get but one block a day up a spiral. 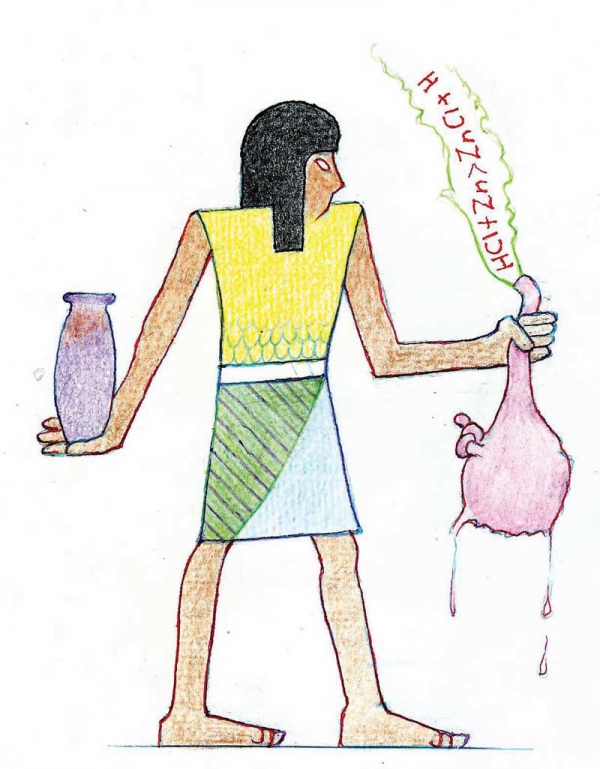 But never to worry, I have worked out a simple system, and no archaeologist has written in to refute it, so it must be true. Try to imagine the Graf Zeppelin’s enormous gasbags in those 1930s pre-plastic days being made of the lining of cows’ guts all carefully sewn up together. Well, the Egyptians had plenty cows, also they had zinc, you see, from Ta Nehu way up-Nile for an alloy with copper to make chariot wheels, and they had hydrochloric acid from animals’ digestive tracts. Now if you put such zinc into such acid you get zinc chloride and hydrogen. So let’s then get a thousand cows’ guts and fill them with hydrogen and tie a number to each two-tonne block until it barely touches the ground, then place big fat men all round, weighing two tonnes in all, to walk up a whole lot of ladders and gently place the block in position.

How to get all the balloons down again? Easy. The big fat men would counterweigh the hydrogen lift and a small skinny man with a rope could haul them down again. As easy as hauling the blocks up. Piece of cake.

But why build a pyramid at all? What’s wrong with the Valley of the Kings idea? Bore a great long tunnel into a cliff face and stick the pharaoh in there with all his hereafter goeters and seal him in with local rubble so the grave robbers can’t find him. No pharaoh was found in any pyramid anyway. Maybe the robbers might imagine this pyramid thing was an advertisement of great wealth inside. As a mausoleum, a pyramid is a bloody stupid idea, man.

But hang on! What’s this? Professor Zahi Hawass, [former] Director of Antiquities at the Cairo Museum, he’s professionally snuffling about the dark places inside his pyramids one day, and right round there in a hitherto unexplored small corner he finds the remains of a certain mural, and what this mural depicts is Old Kingdom aerodynamics, no less. All neatly done, in proper cartouches.

Zahi leaps back! Utters Arabic expletives! These are not merely pictures, they are working drawings! The balloons were aerostats, these are aerodynes; here is a diagram for making a small model helicopter with a light springy reed bow for power and primary wingtip vulture feathers for rotor blades, you can make one yourself and it will fly!

But what causes Zahi to gasp is a diagram for a full-on hang glider. He studies it closely. He knows the light timber would come from up-Nile, he knows about linen and linseed oil varnish, he understands the construction. But he doesn’t understand flying, how to get this thing in the air. Way down along the Red Sea there are hills for take-off at some initial altitude, but there’s nothing round here but flat sand, and this is where the élite were, the adventurous spirits who wanted to do the flying. So whatthehell, they had plenty of wealth, plenty of stone, plenty of labour, so let’s do it! Let’s build a mountain! Sure, put in a whole lot of passages and chambers and stuff for the daft pharaoh since he’s paying for it all, I mean he’s the main adventurous spirit anyway, but there’s no way he’s actually going to be so bloody stupid as to get buried in there, hey.

But, now, if you hang-glide off a high place you have to run bedonderd downhill to pick up flying speed, and this DIY mountain of theirs was a peak, no running, it had room on top for only one aviator at a time, standing. So what this lad had to do was grit his teeth and dive down at a steep angle and pick up flying speed that way. And should you build such a hang-glider yourself, dear reader, and launch it thus steeply, you would find the angle of your descent to be exactly 52° and ja, you guessed it, that’s exactly the angle of the sides of the Great Pyramid at Giza. So it must be true.