Alright my Nosey ones, let’s get it on! And I am not referring to the Marvin Gaye song but psyching myself up to take on a law firm here in Barberton, Renier J Oelofsen Attorneys, over a debt I incurred to the tune of R3,415.95. But, alas, like the incredible rise of certain stocks, these legal vultures claim I now owe a whopping R8,180.47 – thanks to tagged-on costs that would even make Mother Teresa ask, “What the f***?!” (Although Mother Teresa is more likely to have exclaimed “Good Lord!”) 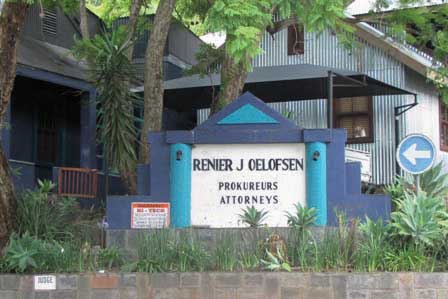 Other legal practitioners this p-d off  scribe spoke to about my little problem with this debt-collecting law firm were as one in saying “What these guys do is criminal” – a comment echoed by a magistrate I met socially.

“I have written so many times to the Law Society of the Northern Provinces to have these guys investigated but for some inexplicable reason the society has done nothing,” said the jurist.

Why is that not a surprise? Well, the same society is reported to have strongly objected to Parliament’s Debt Collectors Amendment Bill of 2016 which addresses the “criminal” practices of those collectors who rob or fleece debtors.

(And the same law society that was so tardy in sanctioning their former chairman, Ronald Bobroff and his son Darren – both of whom were struck off the roll last year for their dodgy dealings involving Road Accident Fund payouts – who are now fugitives, reported to have bought a R26m house in Sydney, Australia. – Editor.)

Another legal sort threw in her humorous two cents’ worth: “Everyone in this town knows that once Oelofsen gets their claws into you, it’s like a fish that’s been plucked from the waters by an eagle – there is no letting go. Trust me, fight this or your debt will balloon and never end”.

How do debt collectors, especially the law firms, get away with this? And, unlike their counterpart general-collections agencies, they don’t have to resort to verbal threats and intimidation. It’s worse, they subtly inflate your debt with costs and by the time you find out that the original R1,000 you owed is now a whopping R5,000, you’re thrown into such a tailspin that you don’t know what to do.

But the law firms are happy to advise: “just keep making your monthly payments”. And if you make a fuss, they resort to their favourite incantation of “get a lawyer”. Oh, by the way, the reason  they do not have to resort to verbal threats and intimidation is because being handed over to lawyers has already done the trick.

So, how do they get away with ballooning debts? As the saying goes, knowledge is power – in this case, the lack thereof by most people, which has given many of these legal vultures the power  to milk debtors.

First, most people are not aware of the schedule of particulars – the costs prescribed by the Department of Justice that law firms are allowed to charge when collecting debts. Second, the costs can be challenged by requesting – sorry, forget requesting, by insisting on a court taxation by the Clerk of the Court. Court taxation compels the court to check the law firm’s costs against the prescribed amounts that can be charged.

But be warned, the clerks in the Clerk of the Court’s office might not know what the heck you are talking about. So, once again, knowledge is power and lack thereof is a debtor stuck with a ballooning debt and a legal vulture as happy as a pig in…

Seriously, I could not believe my ears when a clerk at the Barberton Magistrate’s Court said she did not know what the Schedule of Particulars was.

Be that as it may, I proceeded to download the schedule as well as the Debt Collectors Amendment Bill of 2016 and a few days later, gave it to the clerk, saying: “Please familiarise yourself with this information so you can provide a proper service to the public. You guys should know this stuff. Her colleague at a nearby desk chipped in to say: “The department has scheduled an upcoming workshop on this, with a focus on the Amended Debt Collectors Bill of 2016.”

On behalf of all debtors out there (and really, on behalf of all the good citizens of Mzansi), please, Justice Department, fast-track these workshops so our clerks of the court can give us a proper service.

Serious warning continued: For crying out loud, when this writer followed up on the court taxation request, the clerk actually said: “Yeah, a person from Oelofsen’s came in and I asked them if these costs were correct and they said yes.”

Cool, calm and collected I said, “Oh! that’s cute and (injecting a little sarcasm) you just accepted what they said; taking their word for it.

“My sister, do me a favour, do this properly. Here is a copy of the Schedule of Particulars as well as a copy of the Debt Collectors Amendment Bill of 2016, please study both so you can help me and others properly.