Hungry? Fancy a crisp grasshopper shank? What about a dainty ball of fat that has been knocking around in your backpack for a week or two? No? Well you shouldn’t be so picky if you hope to survive in a brave new world. So says Frank Owen, who isn’t Frank Owen. 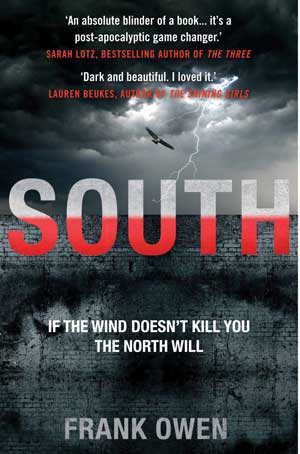 Frank is actually a pseudonym for two writers: Diane Awerbuck and Alex Latimer. Their reason/s for ducking behind a bland Welsh moniker is/are not revealed. But, whatever the cause, they have come up with a rare thing: a lusty post-apocalyptic adventure page-turner.

Some conspiracy theorists might contend that the entire concept was sparked by extrapolations of Donald Trump nightmares, with a future United States of America devouring itself in a North/South confrontation of surpassing evil. But if the book is veiled propaganda against The Donald and all his works, it nevertheless contrives to entertain and titillate.

Yes, Virginia, there are some hot encounters between our heroes (PC-speak apparently now forbids the female form of “hero”). Be assured, however, that the brave pair are physically equipped for sundry traditional pleasures, despite having to fight through horrors of human and chemical degradation in an epic battle for survival. Lively stuff.

The villains are absolutely, and satisfyingly, disgusting. The good guys are few, but strong in the cause of decency. The conflict, which has laid waste to the South, arose from a perceived insult to the mad scientist-type ruler, one Renard. He  has constructed a wall across the land, from sea to shining sea, with prosperous Northerners revelling on one side and despairing Southerners rebelling on the other. Sound familiar? Anyhow, the dispute between the two parties dragged on till wicked Renard introduced frightening chemical warfare, with filaments deliberately floated south on the prevailing winds.

Frank Owen and Co do not spare the reader the horrific consequences. Foul diseases and abject poverty decimate the population, with starving human wrecks attempting to survive by eating the equivalent of roadkill – when fortunate enough to find any.

Will decent farm boy Dyce and commanding carer Vida thrust their way through the ravening mobs and raging elements to discover a life worth living? That would be telling. But the tale recalls the mythic  virtues of the Old West as it decries desecration of simple ideals and ideas by crazed powers.

South, the movie, could be a special effects team’s playground. With Angelina Jolie as Vida, and no, not Brad Pitt for Dyce. The role needs the kind of earnest young man who yearns to be tutored by an older woman. Any offers? High box office potential.