Sonny, said I, hoozit man? I haven’t seen you since ’07, remember the beach at Umzumbi? And that bloody big simonfish we had to divide between us and we couldn’t decide how?

Of course that salmon was not a salmon at all, but a Natal Salmon which is a Kabeljou, Kob for short, but that’s a Dutch codfish, and it isn’t really that either. Ah well, Simon will do for now until the ichthyologists find a nice local name for it. I reckon Rietbul as at Knysna sounds best, but you know how chauvinistic we KZN people are. 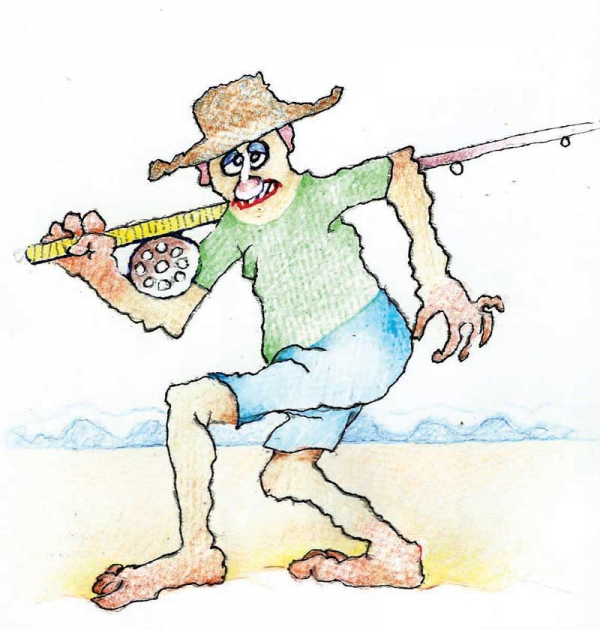 Anyway, there had been Sonny and I standing on the beach and debating about this fish, 20kg, a big bliksem that I had caught but he had a half-claim on because I had used one of his shad as live bait. That’s the tradition, see: if you haven’t been lucky with the shad you can borrow a nice little 1kg one from your mate and carefully thread your hook through its skin and gently launch it as live bait on your heavy rod and let it swim out to the white water where the simonfishes lurk about. That’s where the 50/50 deal came in. His 1kg investment of shad had brought in 1,000% profit of simonfish. But how to divide it? If we split it fore and aft, one of us would get the head which some deem tastiest, so we did it east to west and the head was traded for the best steaks down the tail end. Sonny had first choice, and he chose the head.

So here we are now in the Cracker Jack Tackle Shack, Prop. Poobie Lal, down King Dinizulu Road, Durbs, and I’m asking about Sonny’s condition. Sonny, say I, you are the living picture of robust health. No-o-o, no-o-o, says he, chrinking veins I got. Chrinking, chrinking, small, small, and he shows me the diameter of his shrinking veins between forefinger and thumb.

Hey bad luck, Sonny, man! say I, but they can fix that today with a sort of little blow-up balloon thing which name I forget just now. A long thin balloon on a long thin plastic tube, they sort of shove it inside a vein and expand the balloon then pull it out and your vein stays expanded. Just for an awful moment I thought you meant your veins were getting shorter. Yes, yes, says he, they getting shorter also, and he shows how short between his two forefingers, as anglers show the length of a fish they have caught. My arms and legs too long for my veins now, says he, every time I walk my legs stretch my veins, that’s why they getting so narrow. Like elastic? say I. Like elastic, says he. That’s why he has to walk with his knees bent now, says Sonny. And his elbows.

Hell, Sonny, say I, that’s bloody awful, man! Have you seen your doc, and what did he say? No-o-o, says Sonny, he says I got… and he fumbles in his pocket and produces a piece of paper… this thing I got, man. There is written phlebotractitis. Blimey, think I, ’twould be a happier world if all doctors had the humour of this guy. Did he give you any muti for this condition? say I. Oh yes yes, says he, very powerful pills, make my veins get long same time, twice a day with food. He produces a plastic tub of powerful pills. If they’re not vitamin B dog pills you can bite me. This is not to sneer; I remember in the Air Force the favoured treatment for Sunday babelas was Bob Martin Condition Pills for Dogs, two with corn flakes for breakfast plus a cup of tea.

Sonny, say I, what you need is to get down to Rocket Hut beach this Sunday morning where you and I will catch another simonfish. Walking on the sand will fix your condition. No-o-o, says he, I get one very terrible pain in my left-hand-side foot on the beach. Oh let’s just try, say I, we’ll take my folding camp chair and you can fish sitting down.

So on Sunday he limps on to the beach with his legs and arms bent and settles into the canvas chair with his big surf rod all ready and this time I get the dinky little shad and lace her on to his line and launch her in the shallows, and she hardly reaches the white water when there’s a sudden relentless dragging like a bloody u-boat, man, the sure sign of a simonfish. Sonny goes all aquiver till the bait is right inside its gob and strikes this fish so hard it straightens out all his veins and limbs there and then and his left-hand-side foot is instantly cured. He spends twenty minutes battling this beast up and down the beach, leaning heavily back on the rod, the tight line whist-

ling in the wind. When its ashore, we weigh it. 20kg, exactly.