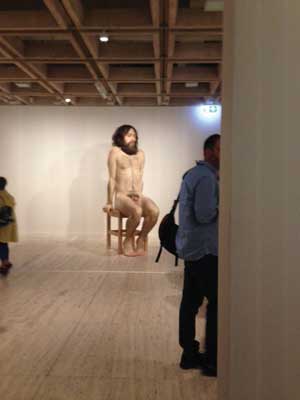 Attracting the most attention at the Art Gallery of New South Wales in Sydney – alongside Rodin’s The Kiss and works by Hockney, Picasso and Lucian Freud among others – is the much larger-than-life and hyper-realistic sculpture, Wild Man, by Australian Ron Mueck, which is part of the London Tate’s blockbuster collection of over 100 nudes on show. It is a strangely touching and almost embarrassing figure: a man looking startled on the edge of his chair, naked and defenceless among crowds of dressed people in a well-lit room.

That “Oh omg, everyone around me is married” moment occurs about five years later for Australians than it used to, says a Melbourne sociologist of new Australian Bureau of Statistics figures. In the 1980s most people were married by 25, whereas now the most marriageable age is 30. Perhaps because of more careful choices, and living together (80% before marriage), those who marry stay together longer, the divorce rate is down and the seven-year itch looks more like a 7.4% itch.

Life is full of contradictions, saving birds while building coal mines. “They are morons, they really are morons,” says Dr Dejan Stojanovic of the critically endangered orange-bellied parrot, whose population in the wild has dropped to 14. During nesting season, would-be saviours scale trees near Tasmania’s south-west tip to smuggle eggs laid in captivity into wild nests, and hand-feed nestlings of negligent parents. Raised in captivity, they’d become “fat, lazy parrots” with no idea how to avoid a predator or survive migration across the Bass Strait. Starlings just stab them in the stomach and drag them out of their nests.

In other avian news, a A$1.3 billion harbour project in Queensland has been halted for six months to study the critically endangered bar-tailed godwit, a Russian migratory bird which makes the bird world’s longest non-stop flight of more than 11,000km from New Zealand to the Yellow Sea. Developers are working with government agencies to identify new conservation areas, plans for ranger sponsorship and remediation and rehabilitation projects.

Also in Queensland, the federal government is funding the construction of a A$1.3 billion, 310km rail line from the Galilee Basin to a port which will service the huge new A$16-24bn (R250bn) Adani/Carmichael coal mine, a threat to the severely stressed Great Barrier Reef. Gautam Adani, reputedly India’s wealthiest man, with a personal value of A$7bn, is behind it and, apart from despair that it will massively exacerbate climate change when all that coal is burnt in Indian power stations, and government assurances that the dredged spoil will not be dumped in the reef, conservation groups are gearing up for the “mother of all fights”.

Mark Forbes, the editor-in-chief of Melbourne’s The Age newspaper and a United Nations media peace award-winning journalist who started his (until now illustrious) career as a cadet at Fairfax newspapers in 1985, has resigned after alleged sexual harassment of two female reporters. One says he “groped her on the bottom” at an awards night; the other, that he stared at her breasts and said something like “You’re looking busty” then adding “Not that I’m complaining.”

A 46-year-old public servant has won a payout of A$1m (R10m) after bullying by two managers left her doubled over, sobbing. Her crime was to make mistakes in an internal job application. Afterwards, whenever she entered a lift, she would look down to try to identify the shoes of her supervisors.

“I was terrified. I couldn’t be near them… I did not leave that office the same person as when I arrived,” the woman said. Her psychiatrist says she will never be able to work again.

More government revenue and better health perhaps, but tobacco tax hikes which will see a pack of cigarettes hit the A$40 (R408!) mark by 2020 are leading to a smuggling boom, which may in turn fuel drug trafficking or terrorism funding.

Government tobacco strike team inspector Allister Keel, who led an investigation that seized about 4.5 tonnes of illicit tobacco and over 615,000 cigarette sticks from an organised crime syndicate, says there is a steady stream from China and the Middle East.

“Syndicate members over here would simply open any number of postal [boxes] …in their own name or family or friend’s name to receive these parcels of illicit tobacco products” which they sell through an online platform or other retailers. Police intelligence had linked one syndicate to fundraising for a Lebanese charity aligned with Hezbollah.