President Buhari will struggle to gain the upper hand on corruption and security while party rivalries block economic change.

For an essentially apolitical president, Muhammadu Buhari of Nigeria faces a nightmare 2017 as party rivalries loom larger and larger, obstructing many of his economic and social reforms, as well as his cherished campaign against corruption. The reputation of Buhari, a retired general who makes no secret of his scepticism about party politicians, could now depend on how his team manages relations with the faction-ridden National Assembly.

This year looks like sink or swim for the government, especially without a dramatic improvement in economic conditions. Even Buhari’s efforts to resolve the myriad security threats are being undermined by partisan manoeuvres.

Buhari starts the year as the threat of Boko Haram’s Islamist fighters continues to cast a pall over the north-east, even if hundreds of thousands of displaced people are returning to the region. Although Boko Haram has been pushed out of most of the territory it occupied, including large swathes of the expansive Sambisa Forest in Borno State and neighbouring Cameroon and Chad, it retains a deadly ability to launch hit-and-run operations in all three countries. These often involve sending conscripted suicide bombers, usually small girls, into marketplaces and mosques to kill as many people as possible. Unquestionably, Buhari’s new commanders have improved the military’s response and intelligence gathering but its resources are stretched over an area about half the size of Western Europe, with poor roads and weak communications.

Equally important will be how the government handles the aftermath of the Boko Haram crisis: the displaced masses face malnutrition, and local and international human rights groups have condemned conditions in the makeshift camps. Intelligence experts say that a better-organised faction of Boko Haram is still planning a big attack on an international institution to further weaken the government’s standing.

All this is being seized on by Buhari’s political opponents, within and outside the governing All Progressives’ Congress (APC). Whether it concerns the clashes between Fulani herdsmen and settled farmers in the Middle Belt or the worsening confrontations between militant Shia Muslims and the military, Buhari is accused by his opponents of refusing to back political or negotiated settlements. Despite a recent court order for the release of Ibrahim el Zakzaky, leader of the (Shiite) Islamic Movement of Nigeria, there is little sign that the army will comply.

Opponents make the same criticism of the government’s crackdown on the Biafra independence movement. The leader of the Indigenous People of Biafra, Nnamdi Kanu, remains in detention and protests in favour of Biafra continue.

Regardless of whether criticisms of government tactics are in good faith, they are beginning to be taken seriously by Buhari’s legions of supporters. Indeed, the only group that the government has seriously tried to draw into negotiations is the Niger Delta militants. That seems directly linked to their ability to inflict still more damage on an economy staggering under crashing oil prices. Some sort of deal seems likely between the government and the Delta militants this year: Buhari made a special appeal to the region in his New Year message.

Nigeria starts the year in the economic doldrums. It has slumped into recession for the first time in 25 years, with manufacturers complaining at foreign exchange shortages and restrictions. Banks too are under pressure, with some predicting a rerun of the 2009 crisis, when the Central Bank of Nigeria intervened and took over the management of some. Electricity output, or rather, its transmission, is well below target and undermining attempts to kick-start the economy. As domestic debt and arrears build up and inflation rises perilously, the clamour for the promised turnaround is also rising.

With talented ministers such as Okechukwu “Okey” Enelamah, Babatunde Fashola, Kayode Fayemi and Udo Udoma, all with clear reform ideas, there is puzzlement and concern about the government’s economic failures. Some attribute them to arcane political vendettas, others to administrative dysfunction. Business people hope that the economic team of ministers under Vice-PresidentYemi Osinbajo will be able to assert its authority on policy and push ahead with its initiatives to expand the economy. They complain, though, that many roadblocks remain in the legislature and the executive.

Now, the divisions in the APC are out in the open. The main fissure is between Buhari’s supporters and those of former Lagos State Governor Bola Tinubu and former Vice-President Atiku Abubakar. First, they complained that they could get no access to Buhari but now it seems that they are organising a political alternative: the “Mega Party”, which would group their own band of supporters with other APC dissidents together with the rump of the opposition People’s Democratic Party (PDP).

As Tinubu and Atiku are both billionaires, they have the wherewithal and probably the enthusiasm to finance the new party. Atiku could run for the presidency and Tinubu would be in his favourite role of kingmaker-in-chief. APC insiders say that both men have lost the last vestiges of Buhari’s trust.

Senate President Abubakar Bukola Saraki starts 2017 on better terms with Buhari than he was a year ago, partly because he has used his political weight effectively. It falls partly to Saraki to persuade his fellow senators to back the government’s plan to borrow US$30 billion for infrastructure projects to bridge the financing gap in the 2017 budget. Yet Saraki is not completely out of the danger zone. His Code of Conduct Tribunal trial for false assets declaration, adjourned until this month, still has to be resolved. It has been going badly for the prosecution, like so many other anti-corruption efforts.

Top priority this year is to find a new chairman for the Economic and Financial Crimes Commission after the Senate refused last month to confirm the provisional head, Ibrahim Magu.

Along with respect from the military, fighting corruption is still Buhari’s main selling point but that could change unless there are some high-level convictions and asset seizures in 2017. His predecessor Goodluck Jonathan’s allies, including former Petroleum Minister Diezani Alison-Madueke; former National Security Advisor, Colonel Sambo Dasuki, and even ex-presidential wife Patience Jonathan are targets but are fighting back hard on the legal front.

In the PDP its former leader, Jonathan, keeps a low profile. Infighting continues between the factions of Ahmed Makarfi and Ali Modu Sherriff. Some say that Tinubu will ally with the PDP’s Makarfi faction in the planned Mega Party. 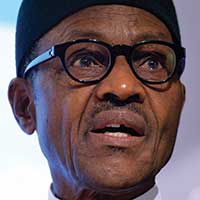 After the disputes over the Rivers State election rerun last month, there will be an increasing focus on the performance of the Independent National Electoral Commission under its new management.

Niger Delta militancy and its political links will receive high priority from the government this year. Most of the country’s oil production centres are back on stream. According to the Organisation of the Petroleum Exporting Countries, Nigeria was Africa’s largest oil producer in December. The position remains precarious, with the Niger Delta Avengers and other militant groups still at large. The 2017 budget includes 65 billion naira for the Delta amnesty.

Foreign oil companies will face another round of local protests and lawsuits in Nigeria, Britain and the United States over environmental damage.

Rising oil prices should bolster Finance Minister Kemi Adeosun’s plans to issue a $1bn sovereign bond in the first quarter of 2017. This is a fraction of the country’s borrowing needs, whether from the World Bank, African Development Bank or China. Recent discussions with China and India on close to $100bn in planned investment and borrowing sparked concern in the Senate about the forward sale of oil production.

The Central Bank of Nigeria’s foreign exchange reserves have fallen below $25bn.