Show what. Her roots were showing

Auld acquaintance! said I to Clarice Gurbles, and all the best in 2017. I recognised you instantly, you haven’t changed a bit in forty years. Which was a lie of course. What about a nice cup of tea, then, hey? said I. Here at the Botanic Tea Garden?

We find a corner table ’mongst the exuberant foliage. The botanic gardens were a Durbs municipal adventure some 160 years ago, with bits of Borneo, pieces of Patagonia, of north, south, east and west, it’s all here: great majestic trees, small ferns, everything imaginable. At the tea place, hadedas poke about with their weird long beaks, monkeys make off with small cakes and saamies from the outdoor tables of German tourists who become encharmed and take iPad pics of it all.

Clarice is up from Cape Town. Nice subtropical atmosphere here, I observe, to get conversation going. A sort of small KZN wilderness, isn’t it? Bad move; Clarice slightly lifts her right upper lip to expose the canine tooth on that side and glances about her with deep disdain. Well they’d better get rid of that Umbrella Tree for a start, says she, it’s not only exotic and invasive, it is listed unlawful. Argument looms, but I never did know when to hold my tongue.

Jaaaah, I suppose so, say I, though I’m a bit exotic and unlawful myself, me auld faether was transplanted from Dundee Scotland, you know, and I have a criminal record. 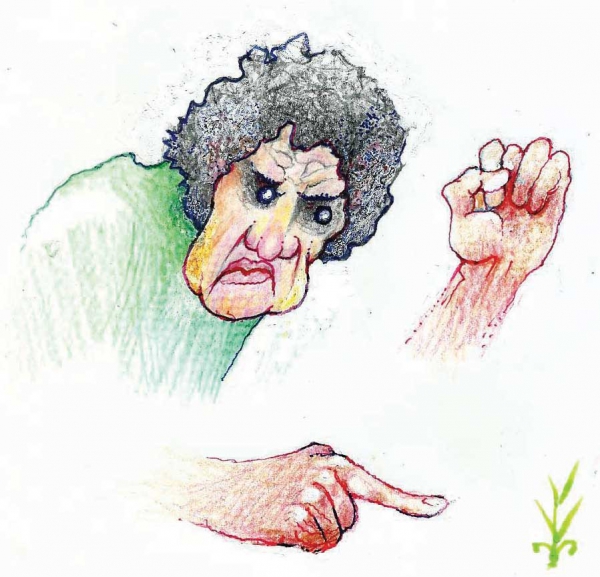 You are just being obstructive for the sake of argument, she says, falls silent and purposefully chomps sorrowful health biscuits neither bird nor monkey would bother to steal. Nobody’s going to violate the Integrity of Nature while she’s around.

I nosh on a few biscuits myself, not for pleasure but to justify the silence, it’s rude to talk with your mouth full, see? Um-te-tum, I hum. I cast about for something innocent to say, to knit up the embarrassing hole in the conversation, and when I’m on about biscuit #6 aha! it occurs to me something about our childhood would be just the thing.

I think I’ll stick some matches in an avo pip, say I, and put it on a glass of water as we used to do as kids, remember. Wasn’t it fun? Another longish pause follows. What for? she says.

Well it’s educational for my great-grandchildren to see new roots dangling down in the water and a little shoot grow up top with a little leaf or two. And then? says she. Well how great for the laaities to see a little newborn thing so full of expectation of life become a full-on strong and happy adult; I think I’ll plant it in the space behind our clothes lines.

AAAUUUGH!! cries Clarice, and bloody nigh breaks her dentures on the last biscuit. I don’t understand you, all you love is invasive foreign plants which destroy our green heritage! She swallows the biscuit almost whole and coughs a cloud of crumbs all about. I wipe the table with a paper serviette and things fall silent once again. Humm humm titumm, I hum.

After a bit I say Nice plastic furniture, hey, it doesn’t rust or rot out of doors and see how easily we could wipe it down with a paper serviette. A good safe subject for calm conversation, that. Plastic is made from the fossil remains of ancient trees, says Clarice, the past was also part of Nature and one should show respect for all species past and present. Like the avo tree? say I.

Why are you so quarrelsome? says she, I respect all species in their own habitats and the avocado I respect in Mexico. Bloody hell, say I, it sounds a bit like old times, dunnit? Avocados are all right but they must know their place. Bantoe op sy plek, ’ksê.

There must be some safe topic somewhere, in Heaven’s name. Aha! So are you going to visit Zululand? say I. Well no, she replies, Buthelezi tried to introduce Cosatu to his Zulu people but in their natural wisdom they wouldn’t even touch it. Are you sure? say I, it’s the first I’ve ever heard of it, I mean it’s not the Great Mango’s usual shpiel, is it?

Well it stands to reason, says she; our farmers are growing exotic rubbish and filling the soil with toxins and that’s why our rivers are all dirty brown. You must have fresh clean streams for soaking Cosatu to leach all the deadly prussic acid out, see, so it’s fine for those places where the forests are pristine and the streams all sparkly, but just think of the Thukela River, how filthy.

Well there you are, says Clarice, it just goes to show.