Yirra yissis man! seg ou Skollie van Schalkwyk to the girl at the takeaway counter, I arsed for only one small potato instead of two big ones, now you won’t even give me a extra slice of meat. Yes but you got extra pumpkin, says she, and anyway I am not allowed to give you extra this or that, it is a standard takeaway Sunday dinner; one price, two spuds, one scoop of each veggie, two slices of meat. Hel, man, not even extra gravy? Seg ou Skollie.

I am starting to wonder why I never learn. The instinct which causes European swallows to migrate unerringly south when the first trees shed their leaves also drives ou Skollie unerringly to the Glenwood Spar when in November the first accursed Christmas trees appear in the shopping malls. He instinctively knows he’ll bump into me some Sunday, this is where I buy my daily crust, and he knows if he rolls his eyes towards the takeaway counter I’ll know he’s not viewing the pretty ladies there but the simmering tubs of tuber and leaf and fruit and flesh. And gravy. Somewhere in there is his Christmas dinner. The first one. 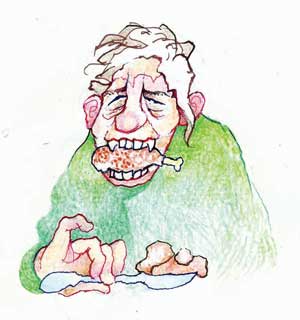 So I buy one for him, and the pretty girl gives him extra gravy because the supervisor can’t come and count it. Not even a spoon? seg ou Skollie. No, says she, you’re supposed to take it away and eat it with your own knife and fork. But the Chinaman upstairs gives you a spoon, says he. Well buy your dinner from the Chinaman then, says she. He opens his gob to argue further, but I drag him off with his plastic punnet of nosh to the Kitchenware aisle, where I pick up a pack of three plastic dessert spoons, also two cokes from the fridge, and check out with this lot and drag him out of the bloody Spar in the direction of Bulwer Park. Haa, a piekniek, seg ou Skollie. Ja, think I to myself, damme if you’re going to find out where I live.

We seat ourselves with our styrofoam crockery in the little nook built by the white unemployed of the Great Depression, a pretty piece of masonry, a long curved stone bench built into an earthen bank with ferns and a great overhanging jacaranda, a neat stone tiled semicircle in front, with a couple of stone columns and a shaped wooden beam, for creepers, which beam nobody has managed to nick because it’s built into the stones.

There used to be benches and small picnic tables around the park, but they’ve all been nicked for township cafés. Well it’s quite pleasant anyway; the Metro Police have shunted off the people who used to sleep here and crap all over the grass, to sleep and crap all over the beach where the waves wash it away, though the park is still a place of social gathering, small cannabis plants sprout all about where friends have picked the pips out of their zols. The municipality mows them flat now and then lest the people who used to sleep here move back in for a quick harvest and crap all over the grass, but Mother Nature prevails.

When ou Skollie has got a couple of gulps down and a bit of breath for talking he says Ag ja, seg hy, me and you we growing ole sort of graceful, laaik, hey? Remember when we were young in Durbs Central? A nice kind of boep, hey, and plenty graze. I use to hiets down from Joburg for the winter you know; then I would get garook in public and pee in the street and the magie would sentence me to two months and I would get lekker warm and fat in Durbs Central. I never did robbery and all that goeters, then a judge would of sentence me to five years in Pretoria Central, a bad-luck bliksems place, jong, and the graze is min.

Did you ever think of getting a job? I ask. Well you could of said I was a self-employed Roaming Romeo, seg ou Skollie. A soort vanna road inspector, laaik. I did think of been one of those Durban Corporation ouens who watched a gang of coons digging up the road, you remember, but the summer in Durban is bad for standing in the sun, man, and anyway by the time I decide maybe to do it, the rules all change and you have to start with digging up the road yourself along with the coons and then maybe you get promoted to watching them. I mean I do have my pride, you know, a soort vanna… vanna… Dignity, say I. Ja, seg hy, that thing, now I got a ole age pension just in time and I stay with the Sarvation Army. He swallows the Coke and belches grotesquely and hands me the spoon. No, you can keep that, say I. Okay, seg hy, for next year.

God forbid. No, say I, I’m migrating to Canada next month.

Dear Editor
Readers are agreed something's terribly wrong at Telkom. Billing is a mess, help lines don't ...
Someone has to pay for the news
It is true that the United States of America cares little for world news. ...
Binary options: Beware of the dog!
Ads promoting a global internet scam, now "dressed up local" to appeal to gullible South ...
It's a giant international scam
Brits are losing millions to UK’s biggest con while the government stands by. By Abigail ...
Angry patients sue hospitals for billions
Grief and trauma as over-worked and under-qualified medics struggle to cope. Angry hospital patients are ...
The killing cost of insurance cover for doctors
Claims against the state for bungled medical procedures in state hospitals have reached  ...
Sky-diving tenderpreneurs risk crash-landings
Airports executives flailing in a welter of bribery and graft. The controversy flying around the ...
Follow the money
On the trail of South Africa’s political assassins. It was a peaceful evening in the ...
SA at the tipping point
The coming year will be one of unprecedented protest, unrest and chaos as the ...
Why South Africa should resist the power of Big Sugar
The proposed tax on sweetened drinks will help improve public health despite overwrought opposition from ...
Gifted. The good, the bad, and the ugly
Father Christmas and Donald Trump may seem a peculiar pairing but, in the church of ...
Not rocket science
Monkey nuts.  Evolution, racism and science ...
New idea. Up under
A match made in heaven, a ray  of light in disheartening times. A tiny rural ...
Hunger Game. Amazing Graze
Yirra yissis man! seg ou Skollie van Schalkwyk to the girl at the takeaway ...
Classified ads #206 December 2016
FOREIGN HOLIDAY ACCOMMODATION ♦ LOCAL PROPERTY TO LET ♦ LOCAL HOLIDAY ACCOMMODATION ♦ LOCAL PROPERTY FOR SALE ...