Oom Kitchener. A most disagreeable man

Oom Kitchener van Tonder was an uncommonly disagreeable man. Not only did he seem to find it necessary to contradict everything anybody ever said, he would also take much pleasure in enraging people for no apparent reason. He would smile with great satisfaction at seeing them grind their teeth and hate him. This curious character trait was explained by a certain girl friend of mine, name of Hooty, because she looked like an owl with great big eyes plus great big thick lenses in her specs. Also she seemed not to blink very often, and as one spoke to her one would expect her perhaps suddenly to swivel her head through 180° as owls are able to do. But I fancied her like anything because of her wondrous sense of humour, which she needed, as ladies do who are not too good-looking. And other blokes were not always trying to shag her, as the saying went in 1946, a nasty situation I’d had with a beautiful blonde lover but recently. 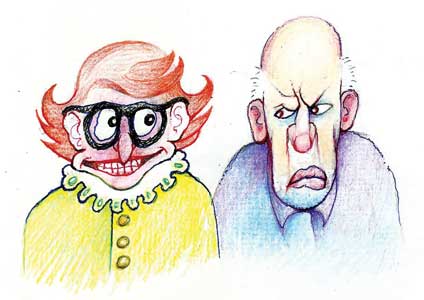 Well, Hooty was doing Psycho at the university so she knew all about self-hatred and stuff, and she said Oom Kitchener had this sorry condition because of the evil name his mother in the Transvaal had bestowed upon him, she who had been a hensopper in the Engelse Oorlog. When Oom K realised Hooty had summed him up so precisely he hated her like anything and called her in Afrikaans a libidinous educated whore, which words I can’t remember otherwise I’d give them to you al fresco with certain grating consonants to offend her sensibilities. Hooty quite liked this since because of her being not too good-looking nobody ever before had accused her of excessive sexuality.

So we had this curious three-cornered relationship. Hooty declared that she was going to do a Master’s thesis on Oom K when she’d done her BA, which straightway Oom K sought to discourage and provoke hatred towards himself by telling her how he had been given the sobriquet Bangbroek in WW2.

At the Battle of Gazala in Libya he had sought to avoid danger by burying himself in the sand behind a low brick wall like one of those dune vipers in the Namib desert, leaving only his nose sticking out. But she found out somewhere that the battle had become known as the Gazala Gallop when Rommel routed the Allies entirely and almost everybody was taken prisoner except Bangbroek van Tonder who was mentioned in dispatches for his heroism. This heroism filled Hooty with love to such a degree she wished to kiss him and Oupa Bangbroek became so enraged he refused to speak to her evermore for six months.

All this background to our relationship you need to know because, while Hooty was doing Psycho I was doing Dutch and part of my course was a bit on the origins of Afrikaans, all about the language evolving in the mouths of the settler community in the Cape far away from Holland and how it was taken to the republics in the north by the Great Trek, and Die Genootskap vir Regte Afrikaners and Ons Skryf soos ons Praat and all that intellectual academic stuff.

Well Oom Bangbroek of course said Ag kak, man, Afrikaans was the language of slaves who weren’t properly educated and the nannies taught it to white kids.

Ja, said I, I’ve heard that interesting theory about the early Cape, whereupon of course Oupa B said Well, that’s all kak too, Afrikaans wasn’t African at all to start with, it started in those Dutch colonies in the East. It was the creole Dutch of the natives and the slaves brought it to the Cape ready-made. Here later on it was hijacked by a white elite and declared a European lingo. So Hooty and I cock our heads and give it some thought and Oom B hates us because we are not cross.

Well all that was long long ago, of course, I was only twenty and now I’m ninety. But just last week I watched a fine documentary movie about the eruption of Krakatao in 1863, and they’d got the clothing of the Dutch officials in Java dead accurate, also the houses and the furniture, the food, the vehicles, everything. This is audio/visual history at its very best and, blow me down, what were the old old Javanese natives speaking if not ur-Afrikaans, with all the double negatives and “baie” and the Indonesian vocabulary: blatjang and piesang and biltong and sjambok. Et cetera.

I surf around. I see there’s a book by Professor Gilliomee on the history of the Afrikaner people and language, 500pp, heavy as a brick and erudite, man, erudite, not the sort of thing you’d want to drop on your foot, and perhaps he tells us about all this. I think I’ll get a good night’s sleep and read it.

But what I really want now is for some dear reader who knows about these things to do us a piece on the eastern origins of our second most-used language.