Roll up! Roll up! Buy your tickets for the Marianne Thamm Rollercoaster Ride! Uproarious highs, and plunging lows!

This vivid autobiographical exercise is a rare thing – an honest warts-and-all record of a life energetically lived. Or living, rather, since the woman in question is vigorously extant at the time of writing, and unlikely to float heavenward soon without fierce resistance. Or downward, for that matter. Marianne, after picaresque beginnings, has found good reason to carpe diem. It hasn’t been easy, but she has survived sundry complexities without losing an essential idealism. She is funny, combative, thin-skinned and given to dark imaginings, often leavened by the gift of superb comic timing. 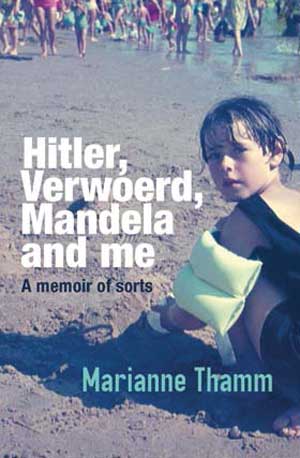 The humour is surprising, with such an operatically unlikely background. Picture this: Daddy was a World War II Luftwaffe pilot, Mama was a unilingual Portuguese cleaning lady and the displaced parents met passionately in post-war London. This linguistic and cultural collision led to the couple’s mutually tolerant relationship. It soon produced sensible engineering-type son Albert, and not-so-sensible little Marianne. Clearly, she was rebellious from the start. Albert left for Australia soon after graduation. To duck family strife?

Who would have thought that such parents could produce a notable writer, journalist, stand-up comic and sharp-tongued social commentator? Raised in the less salubrious bits of Pretoria North, she was not schooled in the suavities of the English tongue. Reading for pleasure and instruction came comparatively late in Marianne’s life, but she compensated richly for the delay.

From the outset, she identified as a boy. Girly frills were rejected. Her adored and supportive mother did her best to impose conventional girlhood, but Mommy didn’t stand a chance. Her little darling was too busy fending off the local perv and competing with the lads at the fishing hole.

One might say Marianne is a feminist. But that would be an understatement. Her every childhood joy is rooted in love for her mother. Father is never forgiven for being what history and circumstance made him. The irony is that, despite their profound differences, daughter yearned for his approval. He clearly cared deeply for her, but was unable to demonstrate his love in the desired manner. Their sustained warfare endured to the end of his life. And, seemingly, beyond.

It is a curiosity that there is no sympathetic note of Georg Thamm’s years as a prisoner of war. The fact that his Berlin childhood world had collapsed in the bomb rubble, his mother had died. Yes, he had been a 14-year-old Hitler Jugend member, but not quite in the Himmler category. Marianne , furious at defensive male stiff-upper-lip conduct, sees her late father as an obstinate relic of obsolete social modelling. It is a relief to know that the old man loved his daughter’s two adopted girls. For Marianne, fighting a losing battle against emotional commitment, eventually succumbed to the love of a partner, and the riotous joys of children. Black children, by the way, which fact failed to ignite any possible latent racism in Georg.

This book is a passionate record of self-discovery. Surprisingly, for such an original thinker, it includes the usual religious mea culpa for having been born a privileged white, but that scarcely detracts from the joyful affirmation of a sparkling, subversive mind.