Way back in those Greek days there was a lad name of Milo who when he was but small made himself the model for all bodybuilders evermore. This, simply by watching the family cow during pregnancy, and the moment the calf appeared, by picking it up and placing it upon his shoulders; every day over the years he did this until the calf was a bloody great bull and he to match, more or less. Also, of course, he ate great quantities of nutritious nosh to match the exercise, turning this into living flesh and bone.

And here we had our very own lad, name of Tromp van Diggelen, who started in depression days on a diet of pap en koffie and by the time of full malehood would go about lifting above his head motor car engines and the like, bulls being as unfamiliar to townsfolk as the beasts of the Kruger National Park. Of course there were those who facetiously supposed he’d now grow as big and strong as a motor car, such sarcasm appearing in open letters to the Outspan, a weekly magazine of great popularity for its breadth of opinion and good cheer in those hard times. There, too, appeared advertisements about signing on for a full Van Diggelen course of physical and moral regeneration, which turned out to be exactly what the Prisons Department had in mind for its population of one thousand of South Africa’s most ugly criminal long-term bandiete in Pretoria Central Prison. 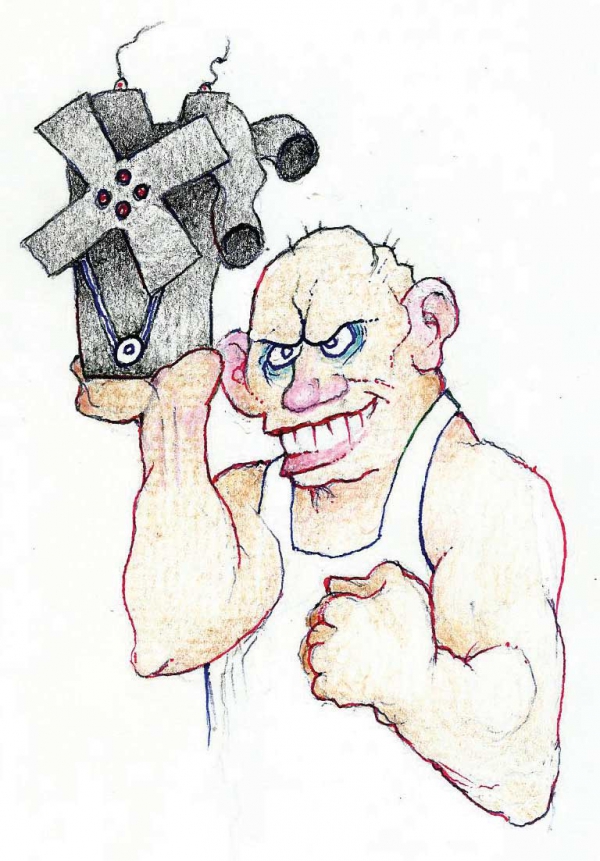 An evil bunch, to be sure. Why, I vividly remember the Chief Psychologist preparing newcomers for moral life in Central, in the Observation Section known as the Madhouse, where a newcomer would sit solitary for six weeks with a New Testament Bible to sort out his antisocial attitude with the help of Jesus before this psychologist would observe him for suitable work. My cell being near to the psycho office I took note of the psychotherapy: mumble mumble... silence... a yell – Kyk hierso, jy laaik my nie en ek laaik jou not a vok! Drie maaltye! Three meals, which means three no-meals tomorrow.

Ah well. Then again, long-term incarceration demands that the body somehow get exercise, and here arose a problem: the bandiet community had no access to any sports field, and in any case outdoor running was much discouraged. But indoor sportsmen particularly favoured boxing, half the community being here for GBH, grievous bodily harm, and much enjoyed beating folks to the ground with bare knuckles. Here Tromp van Diggelen prescribed the use of boxing gloves and lifting great big stones over one’s head and a diet for all as follows: Pap. Kaapse stokvis, brought to Pretoria in wet sacks, fried in animal fat (lard). Cabbage, boiled. Mielierys, boiled. Animal fat poured on the cabbage and mielierys. Koffie, made from a bean unknown to botany.

And here one morning when I’m doing my silent solo indoor exercise, walking up and down between the cells, I see the Observation Section cleaner bandiet, one Blackbeard, pestering the Observation Section warder, one Pieterse, who is trying to write something down at a sort of desk. Blackbeard is a breker, a street fighter, composed almost entirely of scar tissue, now he’s bragging about his prowess in fist-fighting.

The reason is that Pieterse is the Transvaal Middleweight boxing champion. On goes ou Blekkie. “I know if I took you on you would eventually win,” says he, “but I’d give you a good go.”

Eventually Pieterse puts down his pencil and moves to his office. His movement is that of snake, a rinkals. He comes out with a single boxing glove which he puts on his left hand. Okay, says he, give me a go. Blekkie lunges and Pieterse dodges his head ever so slightly to the right like a rinkals and lands ou Blekkie an overhand left moerse vokken vuisslag to the middle of his forehead which spreads him out on the floor. He returns the glove to his office and goes about his writing. That’s observation for you.

Then there’s King of Bandiete Johnny Scholtz, he’s pushing the Indeterminate, 9-15 years, he’s in year 10, his buttocks are like an old truck retread from all the lashes he’s taken over this time for menacing prison staff and now he’s just realised if he can get paroled for good behaviour he might yet get to sit on a sunny beach eating ice cream, with a pretty missus nogal. They’ve rewarded him with A-group status which allows writing certain friendly letters to people outside, and his first letter is to the Outspan, thus: Dear Tromp van Diggelen, before taking your course I used to get such an erection I couldn’t bend it over the edge of a table using both hands. Now I can easily bend it double with two fingers. Am I getting stronger or weaker?