Colonial empire-builders are, of course, personae non grata these days, and nobody sheds a tear at the sufferings of their pawns. Which is unfair. Diary of Captain James Maurice Primrose: 43rd Regiment of foot is a rare daily record  of a young British officer’s experience of the mostly inglorious and exhausting business of suppressing the Xhosa rebellion during the Ninth Kaffir War.

Intensely PC readers should reach for the smelling salts at this point – the K*$#@-word litters the diary because that was the term employed by the invaders, without prejudice. Dr Jackson’s introduction mentions a possible Portuguese origin for it, as thought to describe “people without religion”. Of which, of course, there are vast numbers today. Agnostics, that is. Or perhaps Ag%#2& in PC. 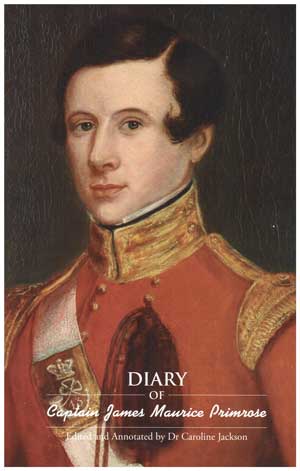 Jackson, a former Research Fellow of St Hugh’s College Oxford, states in her acknowledgements that the book is as much a contribution to Xhosa history as it is a record of the exploits of the British army and settlers in the 1850s. The project originated in England, when Susan Tyler drew Jackson’s attention to the diaries and paintings of her great-grandfather. The family had stored them in an old deed box. A second diary was found, written in1879-1880, when he was in charge of British forces in Afghanistan during the second Anglo-Afghan war.

The African experience is recorded with soldierly wryness at the demands made on human beings by the overlords. Apparently the Afghan diary is, unsurprisingly, redolent of exhaustion and defeat.

Primrose’s officer father died when the boy was 14. He was packed off to Sandhurst military college, where the records show he was a diligent student of arithmetic and mathematics, French, fortification and military drawing. Watercolours of his African sojourn, some of which feature in the book,  are more than competent. The battles were often bloodthirsty, but the pictures are calm depictions of troop encampments and travel in idyllic landscapes.

Jackson notes that other diaries of the period exist, but the Primrose papers are rare, in that they are a daily diary of historic people, times and dangers. The gallant Primrose had previously battled rebels in Canada and assisted the Irish in a time of famine. Trained to obedient discipline, he keeps a cool head despite the horrors of killing and destruction of Xhosa lives and crops. The soldier survives and observes.

Governor Sir Harry Smith is recorded as having demanded that a chieftain kiss his boots (Jackson conjectures he might have developed a taste for such excesses in India).

Primrose is sceptical of his successor Sir George Cathcart’s long-term policy of extricating British forces, leaving towns defended by forces raised locally from the white population. He has little time for the people of King William’s Town, accusing them of “fattening on the military. Everything is at war price. Provisions dreadfully dear and as for other things they have risen 20 per cent…”

The essential soldier in him was horrified by his first impression of British troops who had been in the African field for long periods. “What a sight!… All the men and officers had grown long beards and some were nearly black from exposure in the atmosphere night and day… their accoutrements had never been cleaned since they started on Patrole [sic]. The horses were in wretched condition… no one who has not witnessed the return of a Patrole can possibly conceive the appearance of the whole party – the rags, the dirt, some without shoes…’’. Soon enough, Primrose was sleeping rough on wet ground, and surviving on short rations.

The 43rd Regiment moved on to India (more tiresome rebels to be suppressed), and marriage in Bangalore to Elizabeth de la Poer Beresford, of distinguished Anglo-Irish ancestry. They had five daughters.

It was an understandably weary General Primrose who eventually retired after the disillusionment of war in Afghanistan, land of eternal war.