On July 10, the IOL news site reported that a squad of bounty hunters was thought to be searching for a pre-World War I Cartier fob watch and chain after a R300,000 reward for its recovery was advertised on the front page of the Cape Times.

The man advertising the generous reward was David Jenkins, aged multi-millionaire owner of Franschhoek wine estate La Roche. He had been robbed at knifepoint of the Cartier fob watch and other items of value by a four-man balaclava gang who broke into his homestead on the night of June 29.

The same gang is believed to have robbed several wine estates in the area in the past two years.

Jenkins’s grandfather bought the piece of jewellery in 1912, but it was stolen by the “highly educated and organised” gang. According to a police source, the robbers gave Jenkins and his guests extra blankets for the cold, and fetched the oxygen tank that Jenkins needed to help him breathe.

The IOL report went on to remind readers that Jenkins and his company, Multistar, had first made news decades ago, when embroiled in a murder and foreign currency investigation. (Someone at Independent Newspapers obviously subscribes to Noseweek, and made good use of our excellent online search facility.)

Jenkins’s company, Multistar Container Transport, has long been famous for offering wealthy apartheid-era South Africans the chance to invest in shipping containers as a means of moving their money offshore. Following the murder of its British accountant, it was the subject of an extensive investigation by inspectors of the SA Reserve Bank and the British police in the early 1990s.

The news report then abruptly ends with a bizarre statement: “Jenkins was not linked to the murder.” Unattributed, the choice of words, alone, suggests the panicked intervention of an Independent Newspapers lawyer, more committed to playing it safe than to the risk-laden truth.

So back to Noseweek’s archive: Noseweek reported at the time how, on 21 April 1991, Jenkins’s British accountant and frontman for various of his illegal offshore enterprises, Simon Law, was abducted from his home in the English countryside and murdered by two hitmen who had been hired and flown in from South Africa for the purpose. Several witnesses testified to the fact that, at the time, Jenkins and Law had been involved in an extremely heated dispute, with Jenkins accusing Law of having secretly handed incriminating information about his offshore activities to the South African authorities.

Law’s body was never found, but a British court declared him “presumed dead” and Interpol warrants were issued for the arrest of the two hitmen (who had been quickly identified) on charges arising from his abduction and murder.

But then, Glenn Chait, the elder of the two hitmen, a South African ex-policeman, committed suicide – or more likely was himself murdered – in a Johannesburg police cell where he was being held pending his extradition to England to face trial for the abduction and murder of Simon Law.

The senior hitman’s much-younger partner, Neville van der Merwe, a body builder, was tracked down years later in the US, where he was working as a gigolo/stuntman in Hollywood, using a false identity. He was then extradited to England but when put on trial there, successfully claimed he had merely gone along to England for the ride, as the true hitman’s companion, and that his lover kindly made sure he was not present when the murder was committed, telling him, “You don’t want to be there”.

The body builder also did not know who had financed their murder mission. The real murderer (by this account) was dead by then of course and no longer around to contradict this version.

The jury, at a retrial (the first trial having ended with a “hung” jury) found the surviving, junior member of the “hit” team not guilty.

Perhaps the most intriguing element of the story was the lengths to which the South African Reserve Bank and police and prosecuting authorities were prepared to go in sabotaging the British murder investigation and cover for Jenkins and his senior political collaborators in the Afrikaner nationalist government of the time. And the lengths to which they went to punish the whistleblower in their ranks.

An extraordinary detective thriller, the complete story is there for the reading in Noseweek’s online archive. Read “An Offshore Murder Mystery parts 1-3” (noses25-27) then you judge as to whether David Jenkins was or was not linked to the murder of Simon Law. 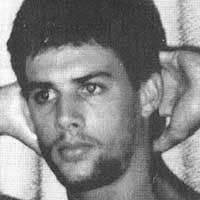