Looking back, I reckon the most horrible people I have known have been highly intelligent.  Boring too. Which doesn’t mean in order to be nice you’ve got to be stupid, it just means I don’t mind folks being a bit dof so long as they’re interesting.

Mfanwe van Cohen was one such.  Mfanwe, said I to her one morning in my little art-restoration studio back of the Elizabeth Gordon gallery, are you Welsh or Afrikaans or Jewish? What? she replied, are you some sort of racist then? My family name was Van der Koen, which sounds like I am some sort of Zulu so I thought okay change it to something Caucasian, what’s wrong with that, hey? Well Jews aren’t Caucasian, are they? said I, and anyway it sort of doesn’t match with the Mfanwe bit, does it, and where on earth did you get a name like that? 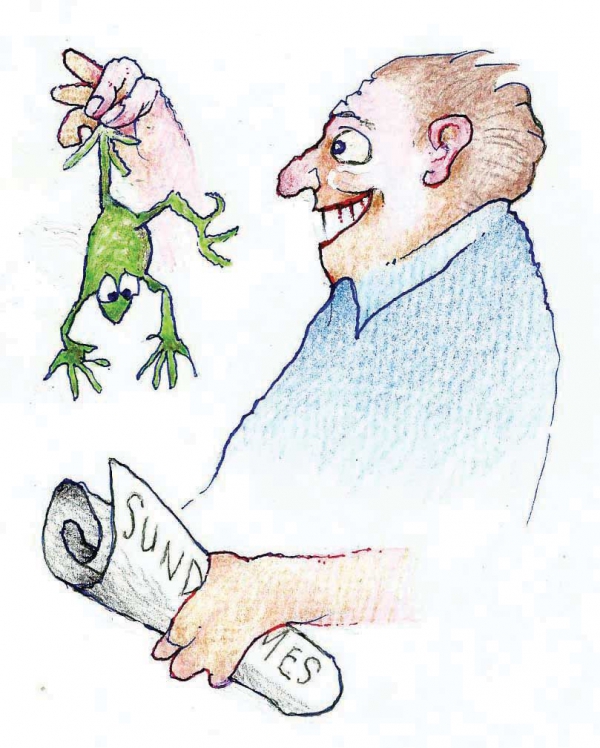 My great-great grandmother on the farm Tweetarentalemorsdoodmeteenskoot in the Kranskop area, said Mfanwe, was the love-child of a very handsome lieutenant in the Welsh 24th Regiment of Foot in the Zulu War, and his mother’s name was Mfanwe, see? and this memorial artwork which is before us for restoration is in celebration of a long line of Mfanwes.

But I must explain, dear reader, what this work of fine art was, which I was required to restore. It was a 1,5 x 2 metre piece of stretched deck-chair canvas and on it were attached left to right and top to bottom assorted symbolic possessions of more-or-less a dozen Mfanwes, mothers and daughters, over 130 years or so. A menu with an Eiffel Tower pic, from a French restaurant in Babanango in 1913, then came a hoofprint on calico from a horse called Bles, then feathers from a budgie name of Squeeky, then a sad last love letter from a German lad who wrote farewell alas he was about to be blown up in WW1 but in fact had fled to Woolloomooloo Australia to hunt rabbits rather than face marriage into the Van der Koens and Kranskop culture.

That sort of thing, about six across and four down, the last being a two-dimensional run-over toad about the size of a matzoh cracker and of the same texture, well-dried and crisp. The present Mfanwe had found this luckless creature on the N3 where it appeared to have met its fate under the eighteen wheels of an army tank transporter, and symbolised to her the transience of life and the evanescence of love, her latest paramour having yomped off to Yarra Australia to grow grapes. What dismay, then, when recently she noticed certain flies settling on this her toad and realised it was neither matzoh nor biltong and was, in fact, putrifying.

Well I know the materials and techniques of art restoration all right, I have never given up on any job. And thus it came about as I stood in a till queue at Pick’n’Pay one day, pondering the process of decay, that I found myself in conversation with a plump genial man who declared as follows: My friend, you have met the right person. I am a PhD specialist in buffology, which is to say a frog expert, and I assure you your only way out is to find a new toad, which I shall be happy to provide from my garden. Place yourself in my hands. So we’re off to his garden where after a bit we find a nice one about the right size, and he folds it up in the Sunday Times which is a good thick newspaper and puts it in front of a wheel on his 4x4 and runs over it a few times with more newspapers until it’s squashed about one mm thick like a matzoh and the same size and there’s no juice whatever left in it. He turns his deep-freeze to minus sixty and sticks the toad in there for the afternoon then rubs all the frost off with a nail brush and sticks it ten seconds in the microwave to boil off any last molecule of water and puts on a face mask and sprays it with formaldehyde. We drive about with the toad hanging in the slipstream to get rid of the pong and I take it home and dip it in polyurethane nice and thick so the residual pong can’t escape and I stick it back on Mfanwe’s memory lane canvas with epoxy. I rub it with a bit of turps so it doesn’t look too fresh and dab on a bit of umber oil paint for antique effect.

Mfanwe declares herself enchanted.  A tear comes to her eye. It-it-it’s so beautiful, she whispers, and natural.  It-it-it’s as if it died only yesterday.