Aria. The food of love

My grandniece-in-law – I think that’s what she’d be, my sister’s grandson’s wife – she’s from Toronto, see, a real tidy place like New York built by the Swiss. She says you don’t get old fag-packets and empty coke bottles lying around in the street. This she observes as we happen to pass certain old fag-packets and empty coke bottles lying around in West Street, now renamed Something Revolutionary Street, which something I forget but never mind, it wasn’t until I was well into old age that I discovered West wasn’t a point of the compass at all but some important historical gent hereabouts name of Martin West of whom no single citizen I ever met has ever heard.

Anyway, we also happen to pass a heap of smelly old clothing lying in this street, with an empty beggar inside, who is either sleeping, unconscious or dead. Such heaps come and go, I explain to Gn-in-l. Some, I suppose, arise and stumble off to lie down elsewhere according to the weather, others, I dare say, get scooped up at night by some discreet squad with a big sort of scooping-up thing and unscooped in a hole somewhere because the cost of fuel for burning people is getting a bit much: it’s got to be either paraffin or no Christmas bonsellas for the City Councillors this year. 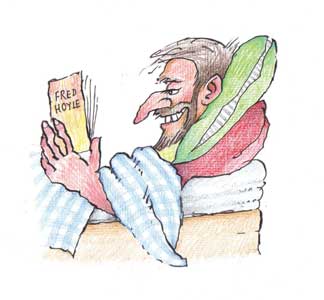 That’s dreadful, says Gn-in-l. That’s nothing, say I, you should have been here when Durbs was a pissy police-state dump trying to be like Zurich designed by the Swiss. Zurich full of Caucasians, that is. Comfortable Caucasian ladies buying swanky dresses and things at Stuttafords and Payne Bros, that is. Until 12.30 pee em on Saturday, when everything would shut down WHAM! until Monday.  You could have landed a passenger jet down West Street without hazard except from the pigeons which took over the city; in the CBD you could hear their gurgling all about in the otherwise cemetery quiet. I myself was under noisy house arrest with two kids and two dogs, I had to get permission from the Chief Magie for me very own mom to visit me very own home. That’s really dreadful, says Gn-in-l, what did you do with your life, says she, just sit and stare at the TV? Well actually, no, say I, we didn’t have TV in South Africa in those days, you should understand, because of communism and pornography creeping into the country. WHAT? she cries, that is truly dreadfully dreadful! How do you live without TV?

Well you wash nappies, cook family grub.  You get a long copper cable and bolt one end on to the iron roof and bury the other end so you don’t all get fried if lightning strikes your house. All that handyman goeters, laaik. You apply the many skills you learned in boep, you know, polishing light switches with Brasso, polishing the floor with wax, polishing everything else with something else. Full-time living, I tell you. And plenty time for reading. Then there are those nice things that normal folks haven’t time for, like keeping fowls. I turned the old-time servant’s bog in the back yard into a hen-house, cemented over the hole in the floor and put in a ladder-perch and made a hole in the door big enough for a hen but too small for a dog, got half a dozen big clucky Rhode Island Reds and a bloody great coq d’or, a gold-mantled rooster who would see all his ladies to bed at sunset and come indoors himself and perch on the piano and crap all down the French polish and when my missus came to practise her Mozart, would bust out in 100-decibel greet-the-dawn crowing. I think ol’ Wolfie would quite have liked it, said she, he’d have written a symphony to go with it, like Haydn with his clock symphony, chimes and ticks and tocks.

And one winter’s evening round about seven thirty the missus and kids are all toffed up and bustling about because they’re off to Don Giovanni in the Playhouse and Marisa Marchio of Cape Town is singing. Such a voice!  Clear, limpid, precise. Such a presence! An Italian presence the likes of which other folks can’t quite get right, full, fruity. But I’m happy enough to climb into bed with a fine SF novel by Fred Hoyle called The Black Cloud, it’s a bloody cold night and I’m all tucked up nice and warm in my winter pyjamas. Everybody’s nagging at everybody else because it’s getting late and they must be off now! When suddenly there’s a ringing at the front gate and the family chorus cries Damn! But they open up anyway, and there unlawfully stands Marisa herself. She bounces in and sits on the end of my bed. All smiles. Hullo, say I, aren’t you going to be late? Hell, says she, one is entitled to be late in an emergency, I have come to sing to you because you can’t come to me. She parts her lips and knocks me flat, I tell you, I have never heard a sound so passionate come out of a human throat. Voi che Sapete?, she sings. What is this feeling? I think I want to cry, says Gn-in-l. Don’t be bloody silly, say I, this isn’t Toronto. It’s okay to talk thus roughly to your family, see.