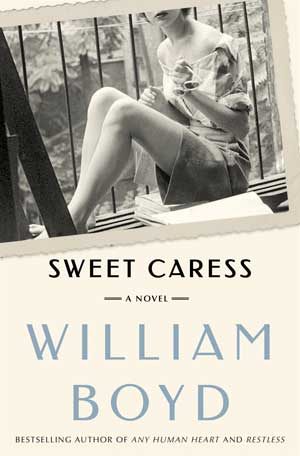 Never mind the title, there is nothing saccharine about this whirlwind biography of a memorably life-affirming character, who seizes joy and stares death in the face. William Boyd is a cunning story-teller, and he spins the tale with theatrical panache.

The beguiling Amory Clay is a woman, notwithstanding her eccentric father’s mischievous decision to publish her birth as the arrival of a “son”. And Sweet Caress is a vivid evocation of this lively individual’s plunge into the maelstrom of social and political change from World War I to Vietnam.

Much is told in an unsparingly personal diary form, often enlivened by photographs. The fact that the young Amory decides, daringly, to become a photographer at a time when nice young ladies didn’t, eventually provides her with entrée on high ­and low.

It’s a long way from snapping London weddings and simpering debutantes in the 1920s to ducking enemy fire with the troops at Da Nang. But if you’re determined to run off into the wild blue yonder, it would be hard to find a better boon companion than adventurous Amory.

Soon after launching her professional self, she gets down to an earnest investigation of sexual matters, with some bizarre variations in the Berlin of Christopher Isherwood. Sadly, most of the photographic evidence went astray subsequently, which put paid to her notion of a book on the denizens of the night.

The exciting chronological tale of changing social mores and manners in the wake of two world wars is varied with flashbacks in tranquillity in the contemplative calm of a remote Scottish island.

The inquisitive mind and attractive personality of Ms Clay lead to the occasional photographic scoops – and the occasional affair. The joys and frustrations of her life are conveyed candidly, and often amusingly. She is seriously thrilled by passion ­– the real thing. Which means that promiscuity is simply not on.

At times risky adventures sound like The Perils of Pauline, but historic facts sustain credibility. Famous names flit in and out of frame (Martha Gellhorn, Rebecca West, Marlene Dietrich) in post-war celebrations at the Ritz in Paris and a crumbling Scottish castle. Then it’s back to memories on melancholy Barrandale island, with her dog Flim.

The interesting irony of Amory’s compulsion to record the pain and drama of war is that her father lost his mind, to all intents and purposes, after an appalling experience as an officer in the dying days (in every sense) of World War 1. On being invalided out of France, he very nearly succeeded in deliberately drowning the young Amory.

But perhaps the most intriguing aspect of Sweet Caress is: could the book be a disguised autobiography of William Boyd?

Its confessions, its vivid evocations of lovers, friends and family, are extraordinarily intimate. The reader feels almost voyeuristic at times. But then, perhaps Boyd is simply skilled at conveying universal emotional truths. Either way, it’s a compelling read.