A strong group within the African Union, including AU Commission Chairwoman Nkosazana Dlamini-Zuma, backed the sending of an armed force to Burundi to confront President Pierre Nkurunziza’s government. This followed a succession of alarming reports from AU and UN observers that another genocidal attack on Tutsis was imminent.

At its January summit, the AU debated the merits of armed intervention. It decided against it because of opposition from countries such as South Africa and Tanzania. South Africa and Tanzania led a successful intervention in the east of Congo-Kinshasa but taking on the Burundi army would have made matters still worse in the absence of a political agreement, they concluded.

In fact, the AU lacks the tools for the job, even if its leaders can agree on intervention. It is yet to agree on the organisation of a rapid response force and there is confusion about how the African Standby Force and the African Capacity for Immediate Response to Crises will work together. Meanwhile, groups of countries such as Ethiopia, Kenya and Uganda have organised regional forces to intervene in Somalia, and West African states have done the same in Mali.

The contract of new Finance Minister Pravin Gordhan runs only until this year’s local government elections, say Treasury sources. The date for the elections has yet to be set, but they must be held before August.

Gordhan was forced on President Jacob Zuma after he dismissed Finance Minister Nhlanhla Nene and appointed the relatively unknown, David “Des” van Rooyen. Zuma regards Gordhan as a “transitional” finance minister, senior ANC sources said, which explains the brevity of his contract. After a backlash from business and ANC leaders, Zuma reportedly offered to reappoint Nene, who declined. The President’s allies, like Small Business Minister Lindiwe Zulu, say the market backlash was “engineered” by his enemies in business.

Much rides on the outcome of the local elections. If the ANC retains all or most of its seats, Zuma’s hand will be strengthened for purging the Cabinet of rivals and pushing one of his own candidates to succeed him as South African President in 2019. Whom he will appoint then in place of Gordhan remains an object of much speculation.

A new political era beckons for Zimbabwe with the emergence of People First (PF). At least, that’s the hope of its founder, former Vice-President Joice Mujuru. Another big name is Rugare Gumbo, a former Zimbabwe African National Union-Patriotic Front grandee and ex-cabinet minister. He is one of the architects of the project and its current spokesman.


The founders had completed crafting the political party’s constitution, said Gumbo, and were now ready for a “grand launch”. He confirmed Mujuru would be the party’s interim leader until a congress which would be agreed after the launch this month. That congress is expected to endorse her as PF president and give momentum to a fierce tussle for power with Zanu-PF in the 2018 general elections.

The Zimbabwe Electoral Commission, which is in charge of electoral and party procedures, has been officially notified about the existence of PF, said Gumbo. Political parties do not need to be registered in Zimbabwe but a notification to ZEC means the party receives all communication related to electoral issues and stakeholder consultations.

The new party currently consists of Zanu-PF heavyweights, the majority of whom fell in a purge instigated by President Robert Mugabe’s wife, Grace Mugabe who accused Mujuru of plotting to topple her husband from power unconstitutionally. Many members were sacked from the ruling party for supposed loyalty to Mujuru, while many others were suspended for different terms for backing her, even though she is the widow of the former army commander, the late General Solomon Mujuru.

So far, Gumbo indicated, PF had set up structures in all provinces. He declined to give details until the public launch of the party. “We have all the people who matter,” said one PF source, and more were expected to leave Zanu-PF as the elections approached.

The new party is expected to ride on growing public sympathy for Mujuru, whose dismissal from Zanu-PF was widely seen as crude and barbaric. She was expelled in April after being suspended following the party’s elective congress in December 2014. The bigwigs sacked together with her appear to have kept the confidence of many Zanu-PF members and supporters, and in the coming months are likely to influence defections to PF.

Zanu-PF remains riven with factionalism, which is now pitting Grace Mugabe (née Marufu) against Emmerson Mnangagwa. To wrest power for herself, Grace has a team campaigning for her, called Generation 40 (G-40). It includes her husband’s nephew and Min-

Mujuru’s backers portray her as a helpless widow victimised because of the absence of her husband, whose death invoked extensive sympathy across the country and the political divide. This helped her to compare favourably with Mnangagwa, who became the party’s and national Vice-President soon after she was sacked and has a reputation for brutality. She is also seen as the opposite of Grace, who is widely viewed as foul-mouthed, power-hungry and uncaring.

Mujuru inherited vast wealth from her husband, although the estate is subject to litigation. However, her allies are wealthy and ready to bankroll the PF and make it a political force to reckon with. These include former Minister of State Sylvester Nguni, said to be campaigning for a parliamentary seat in Mashonaland West, President Mugabe’s home province, and multi-millionaire Raymond Kaukonde, once a long-serving Zanu-PF Mashonaland West Province Chairman with business interests in many economic sectors, including some favoured by Mujuru’s late husband. “She has not only been gifted with people who have deep pockets to sustain her party but they know too well how to fight for each other,” confided an official in President Mugabe’s office, suggesting that the threat from PF was being taken “seriously”.

Notables not in cabinet but dismissed from the party include Air Vice-Marshal (retired) Henry Muchena, once the party’s chief administrator, and his deputy, former Central Intelligence Organisation Deputy Director Sydney Nyanhongo. The two have denied being sacked from Zanu-PF, although they admit being relieved of their party duties. James Makamba, an exiled businessman with interests in Telecel Zimbabwe, is seen as a potential PF funder. That was the main reason why government was trying to wrest the business from him and other “empowerment” partners, said sources.

Zanu-PF has also failed to dismantle Mujuru’s network in the state enterprises, where she had deployed allies. Only Cuthbert Dube was forced out of the Public Service Medical Aid Society, and eventually from the Zimbabwe Football Association, where Philip Chiyangwa, another G-40 member, took over as President.

The PF has ordered about 1,500 all-terrain vehicles for party activities to follow its launch, we hear. Many more would be purchased nearer to the 2018 elections. There is support from a Western donor institution, said an uncorroborated source who declined to identify it, saying only: ‘They have previously funded Mavambo.’ Mavambo/Kusile/Dawn was Simbarashe Makoni’s political party. Makoni’s presidential bid in 2008, when he polled 8%, was widely seen as having deprived the Movement for Democratic Change of victory over Zanu-PF.

Dumiso Dabengwa could be roped in to bolster PF support in the Matebeleland provinces, including Bulawayo. Although his attempt to revive the Zimbabwe African People’s Union failed to make an impact in Matebeleland, its traditional heartland, Dabengwa is still well respected in those provinces. He has already indicated that he is willing to work with Mujuru. He has previously spoken of receiving overtures from Kaukonde and Gumbo. 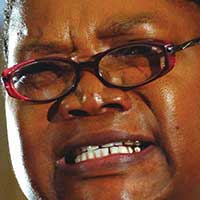 In any case, when Dabengwa and Makoni defected from Zanu-PF to start Mavambo/Kusile/Dawn, they initially had an understanding that several Zanu-PF bigwigs would later join them, including Solomon Mujuru. This suggests an existing understanding with Mujuru’s team. Makoni is related to Mujuru since one of his nephews, Sebastian Makoni, married Mujuru’s daughter Chipo Mujuru. Meanwhile, a former National Mobilisation Chairman for Mavambo, Kudzai Mbudzi, is already a key member of PF. He was once the Zanu-PF Information Secretary for Masvingo, where he is now busy mobilising for PF. Opposition sources suggest that Tendai Biti, said to have already held private talks with PF emissaries, was amenable to a working pact with Mujuru.

Morgan Tsvangirai who left the Government of National Unity after Zanu-PF’s landslide victory in the 2013 polls, is said to be jittery about Mujuru, fearing she could supplant him as leader of the opposition. After a series of divisions and splits, his Movement for Democratic Change-Tsvangirai (MDC-T) is weaker than ever. A coalition with Mujuru is seen as a dim prospect, as neither would want to be subservient to the other.

Tsvangirai is often accused of resting on his laurels and not doing enough to retain talented politicians.

For more reports on Africa go to http://www.africa-confidential.com