South Africa’s rulers have much to offer Britain by way of governance example. We can toss unsatisfactory ministers after four-day careers, while, if Call Me Dave is any thing to go by, poor Brit would-be politicians have to endure endless screenings and then work like fury for long years in power.

Dave, commissioned and co-authored by Lord Ashcroft with journalist Isabel Oakeshott, was originally bruited as a page-turning revenge job, sparked by Cameron’s failure to reward Ashcroft with high office after his lordship had laboured mightily for the Conservative Party.

Ashcroft candidly admits to profound disappointment when he did not figure in the new post-election cabinet (after all, he had personally donated 8 million sterling to the party coffers). But, instead of sobbing his eyes out, he proceeded, to his credit, to write a fascinatingly detailed portrait of the British PM, ably abetted by Oakeshott. 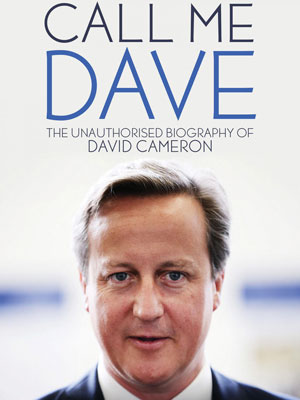 Those who assumed that the tome would be a hatchet job will be confounded by the meticulously fair and generous picture that emerges. Essentially, it turns out that Cameron is motivated by old-fashioned family values. He was fortunate in having a privileged childhood (in a biggish country house, not far from the bigger house where Labour leader Jeremy Corbyn grew up), and attended a tiny private primary school where the Queen was present for Prince Andrew’s nativity play performance. A then-music teacher confesses that he was unnerved at having to play God Save the Queen while the queen in question was seated beside the piano.

Little David grew up in awe of his clever elder brother Alexander (now a QC), and believed he was second best. But he soldiered on, encouraged by his handicapped father (born with malformed legs) and capably charitable mother. Two sisters completed the family, and the children seemingly lived enviable lives, with swotting tempered by tennis, swimming and cycling.

Cameron came into his own at Oxford, despite the allurements of sundry female students. To his own astonishment he achieved a First. When he gained willowy wife Samantha, who is not as demure as she’s painted, he settled down to family responsibilities with a kind of gusto. Clearly his parents’ marital strength rubbed off on young David.

Samantha is reported to sport (shock, horror) a tattoo on one ankle, which is usually concealed by tights on formal occasions. She is a powerful helpmeet, who insists that the Prime Minister interrupt his hectic schedule at least twice weekly to be home for supper and bathtime with the kids. Regular holiday breaks too. The couple supported each other without undue fuss in caring for their seriously handicapped son Ivan, who died in 2009. Cameron said then his “world stopped”.

Dave has its envious moments, when secret weekend parties are described as taking place far from paparazzi lenses, with rich and famous gathered to dance in marquees surrounded by sinister-looking 4x4s with tinted windows and lots of security. Samantha apparently loves a good knees-up. Did David take drugs at university? As he famously replied: he led a normal student life.

Hardly juicy gossip – except, of course, when good neighbours Rebekah Brooks and Co got involved in the News of the World telephone hacking scandal.

If the book has a consistent gripe about Cameron, it is that he has always had the support of friends and family to manoeuvre him into good jobs. It was noticed at an early stage of his university career that he was able to speak confidently without notes, acted quickly and was impatient of ditherers. Likewise his long-time companion and current Chancellor of the Exchequer, George Osborne. They support each other loyally in the treacherous world of shifting political allegiances, and it is assumed that Cameron would be enthusiastic if dear old George eventually had a go at the premiership.

Cameron’s political apprenticeship was thorough. He landed at Tory HQ and, at the age of 24, was advising then Prime Minister Michael Howard. At the outset, his interest was in education (vide his announcement in January of a scheme to educate British parents).

A colleague in the Education Department recalls the young Cameron: “I saw somebody who immediately had the facts and figures at his fingertips. He would turn up at meetings and demand to know how many people worked in the department for education, how many people were doing this or that… it was also clear that once it went into his head, he never lost it… he cared about it.”

Perhaps Cameron’s focus on education has developed an ethic appropriate to his job. It is, however, properly recorded that, during the MPs’ expenses scandal, Cameron was found guilty of having received government assistance in clearing wisteria which had clogged a chimney. Not exactly Nkandla, then.

But he was certainly outraged by the Duck House claim for reimbursement by Sir Peter Viggers, whose Stockholm duck house caused such an outcry that it led to the staging of a West End play of that title. Then old Lord Hogg was attacked for claiming thousands for clearance of his moat. Both were held by the media to be perfect examples of Tory remoteness from reality.

An aide remembers the scene at Conservative HQ when a liaison man arrived, barking: “Would you believe it – it’s a fucking moat! Fucking Douglas Hogg and his fucking moat!”

Cameron dealt sharply with these excesses, threatening the 35-year MP Viggers with expulsion from the party.

The British PM is accused by some of Ashcroft’s sources as lacking broad vision. But he shows his mettle when decisive, justifying his actions with: “It’s the right thing to do.”

Ashcroft may not have received his just reward from Cameron, but he has had his say with an intelligent and highly successful biography. Imagine a world in which we could all afford to publish our disillusionments.