No joke. What about the little people?

There’s nothing even remotely funny about Mr Nkaaandla’s (as pronounced by his fans) little chess game with the finance ministry – until the world’s financial markets said “No, Zulu boy, now your power trip has gone too far”. They smacked the singing president back to his senses, as though he’d been whacked over the head during a Zulu stick fight. Boy! Talk about being woken up to the reality of where real power lies. It’s certainly not in Nkaaandla. 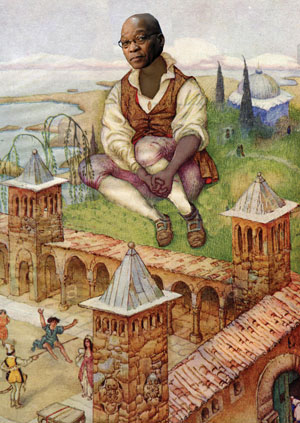 But Zuma’s chess move has also had serious ramifications for local government. And though I said there’s nothing funny about any of this, it was certainly comical to see (Dave Who?) Van Rooyen introduced as the new finance minister. Not only did he appear shell-shocked, he looked liked a scared little boy who’d been told: Just stand there and shut up. Did Zuma wake this poor guy in the middle of the night and say, “You are now finance minister, be ready for press conference tomorrow”?

The man on the ground does not seem very important in Zuma’s eyes, despite it being the little people who vote his party into power. Perhaps it’s unfair to say the little man is not important to El Pres. After all, he did appoint Pravin Gordhan as Minister of Cooperative Governance and Traditional Affairs (Cogta). Why change the name to this utterly stupid cooperative crap? I’ll give them the traditional affairs part. After all, a good portion of our country is still rural – and I’m convinced we should keep it that way, especially after reading a National Geographic story on the urbanisation of that state of Colorado in the US. Comrades, read up on urbanisation and you’ll be glad we’re still part of the “under-developed” world.

When Zuma deployed Gordhan to Cogta it would appear that, at the very least, the Pres had realised that local government needed to be guided by a man who could do the job. Not just oversee the portfolio, but find solutions and resolve the problems therein.

God knows, too many of our municipalities have been in a mess, with violent service delivery protests, mismanagement and so on – and clearly no minister prior to Gordhan had any clue (or none we know of) on how to deal with these overwhelming challenges.

While at the helm of Cogta, Gordhan made it clear that unless political interference was eliminated from the management of local municipalities, this grass-roots tier of government would remain dysfunctional. Moreover, he instructed that municipalities identified as unviable should be merged. Thus my Umjindi has been merged with neighbouring Mbombela, better known by its capital, Nelspruit. Now the merged municipalities are being designated mini metros, paving the way for fully fledged metro status down the line. This means a bigger chunk of moola from the Treasury, a higher rates-and-taxes base and a wider use of resources such as emergency vehicles, fire engines etc which, it is hoped, will improve service delivery.

According to the Municipal Demarcation Board, Mzansi will have roughly 14 new mini metros across the various provinces except for the Western Cape.

There were of course some strong objections, including legal action by the DA which claimed this municipality merger thingamajig was politically motivated by the ANC in the run-up to the 2016 local elections. Hogwash, said Gordhan, and the courts agreed. The formerly “all white-people party” was smacked with a black eye as it lost nearly every case with costs. Poor DA, with a financially devastating court loss followed by the racist peck of the sparrow, its safe to say that, come the local elections, the mergers will be the least of the party’s problems.

Whether the mergers achieve the intended goals remains to be seen. But it must be said that in Pravin Gordhan local government had a minister who applied his mind to the challenges before him and put together some solutions. For now we can only wonder whether or not the Prav’s strategies will be carried out and, if they are, will it be as efficiently and successfully as would have been likely under his leadership.

The removal of the Prav from Cogta to Finance because of our Zulu Pavarotti’s chess game is a definite blow to local government. Gordhan’s track record is unquestionable. He took SARS from mediocre to top-notch – to the dismay of tax dodgers, of course, and did a stellar job in his previous stint as finance minister. This is the kind of performer South Africa’s Little Man needs.

At a press conference over the finance fiasco the Prav said, “I will miss Cogta. I was having fun in the local government side. I enjoyed making a difference in the lives of regular people.”

As if we should be surprised, the Pres came out with his defensive guns blazing during the ANC’s January birthday celebrations, and said everybody had over-reacted to his reshuffle. Over-reacted? Sorry Mr Pres, we don’t think so. Next time try spinning a different tune. We are already singing Money’s too tight to mention, and with the drought compelling us to import the country’s staple, maize, with a weak rand, the last thing we need as is defensive spin that insults everyone’s intelligence.