Ten minutes with KwaZulu-Natal ANC’s new chairman, Sihle Zikalala, and his youth appeal is understandable: the man is confident to the point of being cocky  and unapologetic in his love for the African National Congress.

“He is the darling of the ANC Youth League a friend says; he’s “incredibly strong”, says an adoring staff member.

Zikalala literally grew up in the ANC. In his early teens he briefly flirted with the idea of teaching, but was already “politically conscientised” at the age of 15. “The only thing [that matters] besides politics is football,” he says. The teams that matter most to him are Barcelona and Chiefs.

Born in Newcastle, he attended primary school in the village of Ndwedwe near Tongaat. Both his parents were “serious”. Active in their local church, they instilled self-respect and the need for human dignity in their children.

As a young teenager, so involved was Zikalala in the party that, for safety reasons, he left his secondary school to attend one in an area that was more ANC-friendly. “It was dangerous back then to be an ANC member in KwaZulu-Natal,” he says. Ndwedwe was a hotspot, so the entire ANC branch operated out of Inanda.

After matriculating in 1992, there was no time for “anything else besides the ANC”. It was in the youth league that he cut his political teeth and first made a name for himself. Here Zikalala found a definitive voice, working as an organiser in the Ndwedwe region.

Within no time he was regional chairperson and in 2000 he was elected provincial secretary of the ANC Youth League, with a mandate to open new branches – something he was exceptionally good at. So successful were his membership drives that today no-one can get elected to a top position in the party without the KZN vote.

His ability to organise and mobilise are key strengths. In 2004 he was elected secretary general of the youth league and in 2009, became provincial secretary of the ANC proper in KZN.

Despite these impressive party credentials, to his detractors Zikalala is the political bogeyman of KZN: a ruthless opportunist dead-set on elevating himself to the top job (premier) by first ousting KZN Premier Senzo Mchunu from his seat as provincial ANC chairman and then working his way into the government.

Not true, supporters say. Portraying Zikalala as a conniving megalomaniac is simply a convenient way to scare more conservative (by which they mean older and less radical) ANC members into keeping Mchunu in power.

Zikalala’s talk is all ANC; every sentence a reminder that he has no experience outside the party; that he lives and breathes ANC and wouldn’t have it any other way.  This is part of the reason that he enjoys such massive popularity and wields such party power.

Zikalala is known to support African Union Commission chairwoman Nkosazana Dlamini-Zuma as a successor to Jacob Zuma. Speculation is rife that (barring a political anomaly) Dlamini-Zuma will now make it to the presidential throne come December 2017. Leading the charge will be Zikalala and KZN and the so-called Premier League lobby group of Free State, Mpumalanga and North West.

While Dlamini-Zumahas said there is nothing wrong with ambition and  “big ambition is a good thing”, Zikalala is less comfortable with the word.

He brushes off questions about his political ambitions as though they are an all-too-frequent irritation. A week before he is elected KZN chairman, he tells me that he has “never been consulted” on standing for provincial chair and that he has “not put up his hand” for the position; if ANC members want him in the chair, it is their choice and a democratic election process will decide. “It’s not about ambition,” he insists, not deviating from the script.

“In the ANC, our culture is that the party structures discuss the leadership. If your name gets in, at some point they will consult you. For now, nobody has consulted me. I hear there are nominations, I hear in the media and in the branches people are talking; you hear names discussed. But it is not about putting your ambitions first.”

Zikalala says he was on a candidate list for the Legislature and Parliament in 2014 but rejected both offers because the ANC said he was needed in the party. “So why is it that in 2009 I was [not accused of harbouring ambitions] but in 2015 I suddenly have those ambitions?”

He ignores the obvious answer: he didn’t then, but he does now. Who is starting the rumours?

When people discuss leadership in the ANC, it becomes an issue. When word gets out, it becomes a competition… It could be people with their own agendas or it could be an exaggeration of the democratic process in the ANC.

“People believe that the debate about who must lead the ANC is about individuals. They quickly reduce leadership debates to individuals.”

Never mind what he says, the contest between the two men is common knowledge in party ranks and the media, with words like “war” used to describe the battle between them. Despite this, Zikalala tells me that his relationship with Mchunu is good. “We have developed a situation of working like brothers.”

But he allows his competitor no claim to fame for his rigorous anti-corruption measures. He concedes Mchunu is doing “good work” on that score, but adds: “It’s work that all members of the ANC should do.”

“The fight [against corruption] started in the era of comrade Zweli Mkhize  [KZN premier before Mchunu, current ANC Treasurer General, and a Zikalala ally]. He started many cost-cutting measures which Comrade Senzo has [merely] maintained.”

Zikalala’s words on corruption echo the rote stance now used by most ANC leaders since the party has been acknowledging that graft is eating away at its credibility. He says corruption is endemic because people “want to see themselves benefiting”. “What we must teach and inculcate is a culture of living within your means… what you earn must be what sustains you.

“You cannot afford to have a party role model who is defined by being rich. For me, that is not a role model,” he says. [Goodbye, Cyril. – Ed.]

Has that message reached the ANCYL? There are a number of leaders  that the youth must emulate, he says. “We need to inculcate a culture of studying and reading [in the ANCYL]. Our role models need to be defined by being excellent, hardworking and having strong values.” The emphasis should be on self-development and political development, he adds.

Zikalala really is the darling of the youth league. According to its provincial branch, Mchunu has had his time in the sun, served the party and must move over for a party man who is “more of a risk-taker” and understands a new generation of youth – like Zikalala.

A week before the provincial conference, the ANCYL circulated an emotional press release lambasting a group of alleged Mchunu supporters called Senzo-Se-Nhlakanipho for “working tirelessly but without success” to sabotage the upcoming conference.

“The reality is that the resounding majority of ANC branches across the province wants the leadership of Cde Zikalala,” said the press release.

(Zikalala won with just 53% of the vote, hardly the landslide they had anticipated. In any event the result was being challenged by Mchunu’s supporters as Noseweek went to press. Citing various irregularities, they were demanding a rerun of the conference and leadership vote.)

Zikalala refuses to talk about “hypotheticals” when asked what his first priority would be if elected provincial chairman. “I will not answer you in that way – ‘if you are elected’. The question should be, ‘What is the first priority of the ANC?’ ”

That priority is to restore the unity of the organisation, he says firmly. “People must not be at the periphery… everyone must be participating in the political life of the ANC.”

Restoration of “ANC values” – whatever those may be – will be his second priority, while third place goes to ensuring that “members are of service to the people”.

“There must be no problems in the community while we have members of the ANC [in those communities].”

[With such a far-reaching promise a lot of ANC supporters are definitely going to be disappointed. – Ed.]

Another item on Zikalala’s list is to  capture the “minority” vote. According to Zikalala, it is the most “critical, challenge facing the ANC today”. 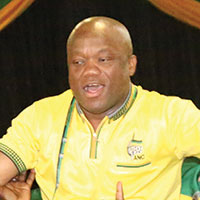 “Minorities [and by that he means racial minorities] don’t feel as if they are part of the system, particularly Indians and coloureds, and there is still a strong element of white supremacy amongst some older whites, who see the ANC as dangerous.

“We might… have made a mistake, not emphasising the non-racial character of the ANC as an organisation, especially post-1997. I am not attributing that to [former] president Thabo Mbeki. As ANC, we might have placed more emphasis on Africans at the exclusion of other communities,” he says.

♦ See next month’s issue for a profile of Senzo Mchunu, whose term as KZN premier officially ends only in 2019.