My three-eighths cousins Foefie and Ferva van Tonder were the children of Bongol van Tonder, SAR/SAS stationmaster at Boksburg, who quite late in his career was appointed deputy stationmaster at Pietermaritzburg, a post of some prestige, let me tell you, and that’s how he came to set up the family home in Mayor’s Walk. Oom Bongol had a uniform with a grey waistcoat and a cap with a badge.  Also a tie. It was he who first introduced to Pietermaritzburg the use of aftershave lotion, which all had thought was a risible pansy habit until Errol Flynn was seen to use it at the bioscope and they realised this was advanced culture from Joburg they were looking at, and even started putting stuff under their armpits and parts.  This brief background I present to show we are talking about no crude platteland takhaar here but a man of considerable polish, and I shall now explain the family history which earned him his unusual soubriquet.

In 1678 Fifi du Tondre lived on the left-hand side of the Loire Valley, going in.  As a mere slip of a girl she experienced a state of ecstasy one morning upon beholding the Holy M 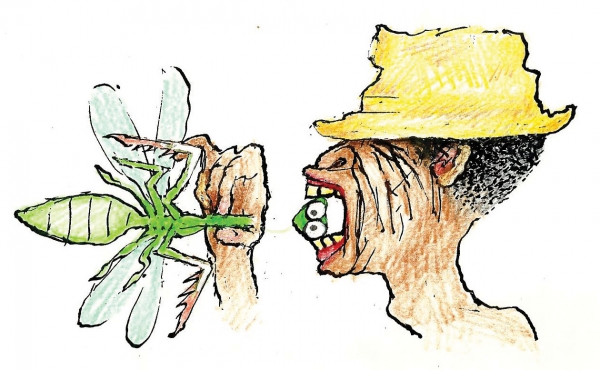 other of Christ sitting in an apple tree, and became filled with such Fervour as to leave this as a family name evermore. At pubescence she beheld in a sudden satanic vision the treachery of King Henry IV in proclaiming the Edict of Nantes giving Protestants civil rights, and by adulthood she had become so enraged at this betrayal of the Mother Church that she went into profound ecstasy one night and put such phantasmagorical ubuthakathi on whoever was king just then as to kill him, soon. Thereafter King Louis XIV thought it a good idea to revoke the Edict of Nantes.

This was the cause of much satisfaction to Pope Clement VIII, naturally, indeed a measure of glee, and he unusually and with great appreciation invited Fifi to embrace Holy Orders and become a Bride of Christ and if somebody were spitefully to knock her off one of these days he would see to it she got canonised as Sainte Halucienne of Nantes and a martyr nogal.  Meanwhile she could chug along as Sister Halucienne du Tondre and do good works at home.  But she, on going into a trance which gave her the power of direct communication with God, popes etc, cried:

Which, interpreted, means: Hell no! I am not going to be slave to a bunch of old French bags! and took herself off to Africa, whither certain Huguenots had fled to lead their vile heretical lives, and where she would get the metaphorical boot into them until they returned to the sacred embrace of Rome. Arrived at Franschhoek simply as Sister Ferva, armed with nought but Faith and a love of the great mural paintings of Rome, she established a mission in a cowshed, in the spirit of the Jesus-manger in Bethlehem. And as she set about beating the undergrowth to flush out all Protestant desperadoes and get the boot into them, there by strange coincidence emerged a true mural painter, name of Witbooi !#//*!, a refugee from Prester John’s Land whence he had been driven by an advancing Nguni horde clear down to Franschoek, where presently he went about seeking a modest cave in which to eat insects and practise his art.

Abandoning first her restrictive black raiment and then her restrictive vows of chastity as the Flame of Love was lighted within her, the now simple Ferva set about building by her own hand and his a modest cathedral with blank inner walls for sacred decoration by Witbooi. A labour of love. She demonstrated for him as best she could the painting style of Michelangelo, changed his heathen name to Garçonblanc du Tondre and set about establishing a Christian dynasty in Africa on the model of the Ricardi or Medici family in Italy. God in his infinite beneficence would feed the multitudinous issue of their loins.

Dreams! Dreams!  It was the Huguenot community that gave them each day their daily bread, indeed unto the event of the Great Trek, by which time of course every one of them was a full Protestant named either Ferva van Tonder or Garçonblanc van Tonder, the Mandela eyes and high cheekbones of Witbooi now classified as Huguenot features, carried via the genes of the dynasty to every family member unto this very day. And as naturally happens in language, Garçonblanc became abbreviated to Garblong for ease of speech, then to Blongar, and by the time the Van Tonder wagons reached today’s Boksburg the name had become Bongol by association with Equus Bongolensis, the Biblical ass, which accompanied the Great Trek in great numbers.  This should not be seen as denigration of any bearer of that name, however; it was the common ass which bore our saviour the Lord Jesus Christ on his triumphal passage through Jerusalem.