The election of a relatively unknown North-West provincial leader of the African National Congress Youth League  (ANCYL) as its national president has again highlighted the growing influence of an ANC lobby group known as the “Premier League”. This group, which also saw its candidate, Bathabile Dlamini, elected as president of the ANC Women’s League last month, is consolidating its influence in the governing party before the 2017 elective conference.

ANCYL member of the Executive Council for Local Government and Human Settlements, Collen Maine, was chosen to head the Youth League when close to 3,000 ANCYL delegates met in Midrand on 4-6 September. The League's National Executive Committee was disbanded in 2013 after its then president, Julius Malema, was expelled for challenging President Jacob Zuma. The ANC leadership replaced the NEC with handpicked interim leaders, dubbed the “National Task Team”. Maine won the ANCYL presidency with the backing of the Premier League, which is led by three powerful ANC provincial leaders: Mpumalanga premier David Mabuza, North-West premier Supra Mahumapelo and Free State premier Ace Magashule. With their strong provincial party base, deep pockets and the support of the ANC KwaZulu-Natal secretary, Sihle Zikalala, the lobby group saw their preferred candidates elected. Mahumapelo jumped on stage and couldn’t contain his joy, minutes after Maine’s victory was announced. Zikalala’s man, Njabulo Nzuza, was elected ANCYL secretary-general, seen as the most strategic position, with responsibility for the day-to-day running of the League, while Mabuza’s ally Desmond Moela was elected as Maine’s deputy.

“It is not true that comrades are imposed, they emerged from the democratic processes of the organisation… we must debunk that notion,” said Fikile Mbalula, former ANCYL president and current minister of Sports and Recreation. Another former Youth League president, Home Affairs minister Malusi Gigaba, told City Press: “The 2017 elective conference is still far away; by the time we get to 2017, you might not be a factor, or your people might no longer have the influence you had wished they would have.”

Nevertheless, the Premier League is “serious and have the money,” one ANC insider tells Africa Confidential: “Nowadays, you need some serious money for an election and they have it; they want influence.” In a thinly-veiled attack on the increase in factional support, the South African Communist Party, led by Blade Nzimande, also weighed in: “Attempts at factional, corrupt and corporate capture of our movement is condemned and the use of money to buy votes, stifle internal democratic processes and isolate the alliance and its partners… appears to be increasing in the run up to 2017.”

Other contenders, such as Ronald Lamola, a former ANCYL deputy president, and former treasurer Pule Mabe, had their hopes shattered when they did not receive the necessary support from branches or delegates at the conference. There were several calls for recounts of Lamola's nomination, which fell short by two votes, but these were repeatedly turned down. “Lamola is a good guy and would have taken the ANCYL far, but the guy has no money,” a Youth League insider told us.

Known as “Collen 34.9” due to his uncertain age – official cut-off age for Youth League members is 35 – many former ANCYL members were disappointed that, as some put it, such a “lacklustre and toothless” person had been elected to lead them. His detractors in the North-West also link him to the Congress of the People (Cope), a party formed in 2008 by a group of disgruntled ANC members, and claim he was a member until 2009, which he denies. The former student leader has also been a member of Parliament.

“That one, Maine, has no vision and no real power, he will not take the League anywhere and will follow what the Premier League or Zuma wants him to do – and he's already so old,'” said a former ANCYL member. Apart from the Premier League’s support, Maine also had the backing of the biggest voting bloc, KZN, which had close to 800 voting delegates. The election of the ANCYL’s top executive showed the strong strategic influence the Premier League wields, with eight members from KZN, five from the Free State and Mpumalanga, and four from North-West Province.

“The future looks bright, we have no challenge at all,” tweeted Julius Malema, now leader of the Economic Freedom Fighters, after Maine's election. A last-ditch effort by a group of North-West ANCYL members, to stop the conference, failed after the High Court in Pretoria rejected their application for an urgent interdict. They brought the application claiming irregular auditing processes and making allegations of interference from top structures within the ANC. 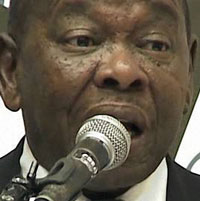 ANC President Zuma also addressed the conference: “We need an ANC Youth League that is loyal to the ANC and must unite behind the new leadership, and work hard to eliminate factionalism which diverts cadres from building the ANC and the country”. Gauteng delegates who had supported Mabe snubbed Zuma by refusing to attend his speech.

Two international mining giants are in dire straits – Glencore and Lonmin – and taking parts of the economies of Congo-Kinshasa, South Africa and Zambia with them. Even before the crisis both carried political baggage. Glencore has been run for the past 15 years by South African Ivan Glasenberg, who is remembered by African National Congress (ANC) leaders as a protégé of company-founder Marc Rich, the pioneering commodity trader who broke sanctions to sell to the apartheid regime. Lonmin, once the minerals division of Roland “Tiny” Rowland’s Lonrho, later had Cyril Ramaphosa, current SA Deputy President, on its board, and is now indelibly linked to the 2012 massacre by police at its Marikana mine.

Hit by weak platinum prices, SA-based, United Kingdom-headquartered Lonmin PLC is cutting investment and jobs, drawing more ire from the ANC government. Its shares on the London Stock Exchange are down to a 27-year low.

Glencore’s problems are worse still. Lambasted by civil activists for its opaque trading deals with corrupt and oppressive regimes, such as General Sani Abacha’s in Nigeria and President Joseph Kabila’s in Congo, five years ago it heralded a new era of transparency with a public listing.

Yet since Glencore’s flotation in 2011, its shares have been the worst performing in the FTSE 100, losing 75% in value. It has cut dividends and its debt is just one notch above junk status. Finance Director Steve Kalmin conceded that investors were now running “doomsday scenarios”. It has sold 25% of its shares in Lonmin and cut back its capital spending to US$6 billion.

For the last two months, Glencore has been in bitter dispute with the SA government over its plans for further job cuts. It’s also likely to prompt further clashes with the governments in Kinshasa and Lusaka, with plans to suspend for at least 18 months production at Congo’s Katanga mine and Zambia’s Mopani mine, which produce some 400,000 tonnes of copper a year.