Sweet revenge. The latest offering from the astonishingly prolific and wryly entertaining Margaret Atwood professes to trace the history and social significance of the trashy Gothic  fantasy era. But Stone Mattress is not what it seems. Not entirely, anyway.

Certainly it lays into the infantilism of the Goth kiddies who compulsively disport themselves in bizarre costumes of their favourite cartoon characters. But Atwood’s tender abuse of these nutters is window dressing for a cheerfully savage reprise of that old song The  Battle of the Sexes. 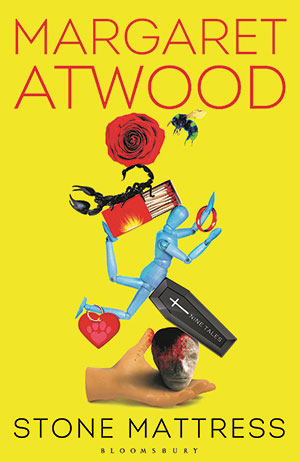 Hostilities start circa 1960, with the lustful  tension of the pre-pill student generation, who smoked pot and saw themselves as revolutionary characters straight out of La Bohème – inflicting bewildered despair on their exhausted, upwardly mobile, parents. Then, in nine subtly linked tales, we experience the increasing disillusionment of the West as romance dies to be replaced by ultimately tedious realism.

The mechanism for sustaining a barrage of invective against the adolescent excesses of the times is the creation of a goofy “novel”. Gavin, your bog-standard layabout student, is forced to apply his mind to literature when he runs out of rent, and his three room-mates run out of patience. The angry trio reluctantly refrain from casting him into  outer darkness, on condition he sign a contract: in the unlikely event of his creepy magnum opus earning a shekel or two, the proceeds must be shared equally between the parties. Gavin the Lazy, Gavin the Randy, Gavin the Greedy labours mightily for the first time in his sweet life.  Not that he has avoided suffering: the exquisite pain of conventional and censorious parents.

The literary fantasy he produces under duress (including the physical demands of a comely flat-mate) is a  corny swamp of masturbatory malarkey. Freud would have been thrilled by the …er … hero: a wrinkled disembodied hand that scuttles about like a malignant crab, in pursuit of ye innocent maiden. Respective publishers would not, of course, sully their mahogany dens with such drivel. They would insist that such ordure be buried deep. Surprise! They lap it up, the money rolls in, and the flat mates get a little tetchy.

Atwood, whose elfin, grey-haired portrait adorns the dust-cover, conveys a powerful impression of autobiography. Stone Mattress is mordantly humorous about late adolescent shenanigans, but equally scathing on the shifts and stratagems of the aged.

A consistent thread is the fact that formative years are just that: the slights and pains inflicted in youth tend to throb forever. Which allows our author to weave an intricate,  satisfyingly devious, linkage of character development over the years. Or non-development, as the case may be. The struggles of ordinary mortals in puzzling times may not rate as profundity, but the lady knows the emotions whereof she speaks.

In retrospect, the naivete of the post-World War II years is heart-breaking, but the current disillusion of the West is not much of an advance. Atwood’s solution? Tough it out, ­and try to see the funny side as the world goes to hell in a hand basket.

The current obsession with fantasy might serve a serious escapist purpose. It seems that, in a naughty world, it mitigates the lurid fears generated by doomful daily TV news broadcasts. The battle of the sexes? Well, Atwood believes that two-timers and cuckolds come home to roost. And life, lump it or leave it, is largely about tenacity. Hang in there.