Cyril under the microscope

Maybe he’s not the mega-rich entrepreneur the public believes him to be.

Testifying to the Marikana Enquiry on 11 August last year, Cyril Ramaphosa described Shanduka, the company with which he is generally identified (he was a founder shareholder) as “a holding company that invests…” This description, alone, raises questions over whether Ramaphosa ever made the grade as a businessman – specifically as a risk-taking entrepreneur. The record shows, rather, a man who has been happy to act as an agent for investors seeking political cover. The reality is that, for big investors, careful orchestration is essential in securing government approval of “black economic empowerment (BEE)” deals.

The quid pro quo is that Ramaphosa has been handed investments on a platter and has amassed a fortune. Which raises the next question: is the part about his being massively rich true? Ramaphosa’s union days are long gone. He officially moved back into politics in December 2012 as deputy president of the ANC and was, of course, later elected also as deputy president of the country. His office has made several statements to the effect that, after returning to politics, he has divested his business interests into a trust, in line with applicable rules.

Ramaphosa has been in the limelight for decades. After he quit politics early in 1997, his first major business involvement was with New Africa Investment Limited (Nail), which won a notable role in Johnnic, the non-mining interests of the original (and giant) JCI.

Johnnic was unbundled by JCI in 1997 under the guiding hand of Anglo American, JCI’s controlling shareholder, which had little choice but to make

early and big steps in BEE. Ramaphosa eventually founded the Shanduka group in 2001.

Today Shanduka is invested right across the economy in everything, literally, from mining and energy to fast-foods, from banking to telecoms, to – you name it. To illustrate the description of Shanduka as a holding – as opposed to an operating – company, take the example of the group’s stake in platinum digger Lonmin, which over the past year has brought Ramaphosa so much unfavourable publicity.

Shanduka holds 50% of Incwala Resources, which in turn holds 18% – a minority – of Lonmin’s two main operations, Western Platinum and Eastern Platinum. Lonmin’s original BEE component fell apart – like so many others – when it ran out of cash. On 10 May 2010, Lonmin announced Shanduka as its new, replacement BEE partner.

It was a sweetheart deal: Shanduka needed only to put up GBP27m; to pay for the rest of Shanduka’s stake, Lonmin provided Shanduka with a loan of GBP206m (about R2.3 billion at the time) bearing interest at just 5% a year – a very “soft” loan. Lonmin raised the cash, effectively on Shanduka’s behalf, from Lonmin shareholders, most of which are based in London.

Shanduka’s investment is virtually risk free: The multi-billion-rand loan to Shanduka is secured by Lonmin shares; if the deal for any reason fails, Shanduka would simply return its Lonmin shares. Leaving aside the GBP27m Shanduka put into the deal, Shanduka can only gain: it has no downside. The problem, of course, is that the value of mining investments has declined in recent years, in some cases drastically.

The Incwala deal was signed when Lonmin was trading in London at about GBP17.00 a share; for the past two years-or-so the stock has rarely traded above GBP3.00 a share; more recently the stock has changed hands for as little at 40 pence a share. Dividends, which are crucial to this kind of BEE deal, have been scarce and have even been skipped on occasion.

This raises the question of whether Shanduka enjoys underlying strength: can it really afford its debt? On 26 May 2014, Shanduka announced that its majority shareholders, including Ramaphosa’s family trust, Jadeite Limited, and Standard Bank, had agreed to merge Shanduka with Pembani. The announcement of the new Shanduka-Pembani group includes the statement that it “will have a gross asset value in excess of R13.5 billion”.

This creates “an African champion”, according to Phuthuma Nhleko, co-founder and chairman of Pembani, who is to chair the new structure. (It is no secret that Nhleko has become involved with the Stellenbosch “mafia”, led by Richemont and Rembrandt supremo Johann Rupert.) The new Shanduka-Pembani structure is coy about its net value – gross value, less debt. As shown in the Incwala/Lonmin deal, Shanduka’s structures – Pembani is similar – tend to be significantly, if not overwhelmingly, leveraged to debt.

Ramaphosa has in the past not been averse to striking deals independently of Shanduka. In May 2012, Optimum Coal delisted from the JSE when transnational commodity trader Glencore acquired a majority stake in the company. In the 28-page circular to shareholders dealing with the delisting, another new shareholder in Optimum is named: Lexshell 849 Investments, a company 100% owned by a single man, Ramaphosa.

This investment has proved to be troubled; for the past year-or-so, Optimum has been in a state of upheaval, incurring material losses, both financially and in jobs, and finding a place in national headlines. (For more about that see “Glencore bought dud” in this issue.).

Parts of Ramaphosa’s record may be better forgotten. MTN under chairman Ramaphosa lost about five million users; the network’s billing system is not what it could be; bad debts are underperforming, the prepaid system is a little ill, and MTN is relatively expensive to use.

Consider also that Irene Charnley, who moved to MTN from Johnnic, oversaw the MTN deal in Iran, a deal now under heavy investigation by US authorities. Charnley had worked with Ramaphosa at the National Union of Mineworkers. 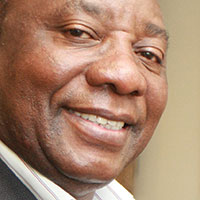 Ramaphosa’s links with Standard Bank – not least originating his involvement with MTN – have become increasingly charmless. In October 2007, Standard Bank, long a major shareholder in Shanduka, announced that the Industrial and Commercial Bank of China had acquired a stake of about 20% in Standard Bank for USD5.5bn.

On this theme, Shanduka shareholder Jadeite Limited is a wholly-owned subsidiary of CIC International, which is controlled by China Investment Corporation.

Let’s face it: Ramaphosa may have more luck back in politics.