In June a very good friend of mine, Sipho Masuku, died as a result of internal injuries sustained from a hit-and-run incident. This was a hit-and-run in more ways than one; the culprit, driver of a Toyota Venture taxi, dropped off the vehicle at the taxi owner’s house and made a run for it out of Barberton.

Sipho’s death was closely followed by a car accident involving another close friend – let’s call him Bush – a valuable employee on my farm. There were four in the car and the driver died in the crash. Although Bush was lucky to have survived, he was nearly paralysed – and of course it was yet another road accident that could have been prevented.

Their stories have brought to mind my own experience of state medical care as well as the tragedy that I shared with readers a few years back, of a child whose penis was accidentally amputated at Barberton General Hospital. Although reckless driving is so common in this country, it is the state medical care that needs to come under scrutiny. Sadly there appear to be too many mistakes and possible misdiagnoses by unsupervised junior doctors doing their residency at Barberton General Hospital – one that is classified by the Mpumalanga Department of Health as a training facility for both doctors and nurses.

In the early 2000s I was referred to Barberton General by a local clinic after complaining of a shortness of breath that I had been experiencing for roughly two weeks while jogging. I was sure I had contracted TB. After all, my mother, with whom I spent a lot of time, had recently died of respiratory failure, TB. 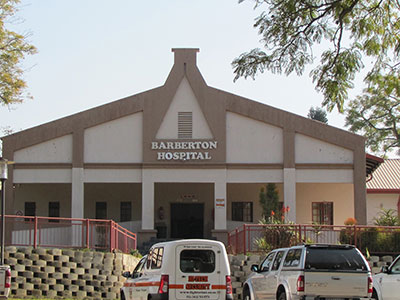 The young hospital doctor performed the basic stethoscope test on me – breathe in, breathe out – then said, No Sir, you are fine. I said that’s impossible. Why are you not taking me for an X-ray? He said an X-ray was not necessary since he was confident his diagnosis was correct. I said f*** your diagnosis. I demand an X-ray! After expressing his displeasure at my tone and use of foul language, he agreed.

Back in the examination room, the X-ray would reveal that I was in the early stages of TB. Although the doctor apologised profusely, my response was by no means forgiving. What if I’d been one of those poor unsophisticated people who cannot stand up for themselves?

In the tragic story of the penis amputation, the little boy’s mother had been sent from pillar to post for nearly two years – with everyone from the hospital’s administrators to the Mpumalanga Department of Health ducking and diving – despite the fact that the boy’s file had clearly stated “amputated penis during circumcision”. A copy of the file was leaked to this journo by an inside source angered by the boy’s plight and the mother’s anguish.

Naturally when I heard the news of my friend Sipho Masuku’s death and received subsequent information from an inside confidential source, I immediately suspected misdiagnosis. My hunch was validated by a nurse who said, “We have seen many casualties like your friend and he should have been referred to Pretoria instead of to Nelspruit’s provincial hospital, Rob Ferreira. We tried to tell the doctor this but our advice was ignored. This happens all the time with these junior doctors. We have years of experience but because we are ‘just nurses’, they don’t care about our input”.

It would appear that the same misdiagnosis scenario befell Bush when he was simply put in a neck brace and sent home. It was only after a week-or-so, when he went back to the hospital to complain about being in excruciating pain, that he, too, was then referred to Rob’s, where the injury to his spine in the neck area was diagnosed as being more severe than originally thought at Barberton General.

At Rob Ferreira he was operated on and a metal plate was inserted in the back of his neck to (as he said the doctors said) stabilise his spine in that area, since it appeared to be slightly dislodged.

No attempts were made to get comment from Barberton General by this experienced scribe; history has shown they just refer one to the Mpumalanga health department. And, as is often the case, attempts to get comment from the department were unsuccessful before going to press. However, in Masuku’s  case, two doctors – one, a former member of Barberton General’s board, Dr Younis Vawda, and the other, a trusted advisor to this journo on medical matters, Dr FA Saley – both agreed that the suspected misdiagnosis of Masuku’s internal injuries was a hard call even for a seasoned doctor.

And on the Bush matter, Dr Saley said this, too, was a hard call but the insertion of a metal plate might not have been the best treatment, since research had cast doubt on its long-term suitability. However, Dr Saley echoed my own sentiments as well as a comment made by the nursing source: “The biggest problem is that these junior doctors are attending to serious cases unsupervised and this is a bad reflection on the Mpumalanga Department of Health’s responsibility to patient care, and not so much on Barberton General and, as such, the junior doctors.”

Be that as it may, we, the patients, expect that these matters should be addressed by our hospital administrators, not by some deployed party loyalist  sitting in a cosy office at the Nelspruit provincial government complex.

May Sipho rest in peace, and a speedy recovery to Bush.

Sex, drugs, lies and blackmail
How blonde spy double-crossed her clients and blackmailed her way into SARS and the Sunday ...
The monster that ate Berea
"Durban council not to be trusted," rules judge and orders nine-storey building under construction ...
Breakdown Volkswagen
Tour company tells all about Volkswagen's new "breakdown bus". The wheels of the bus don’t ...
Absa fails sums test
600% increase in fees is 'in line with inflation' according to the bank. Absa claims that ...
Stent
Facebook friends ...
Case of the disappearing millions
How R600m vanished, under the expert care of Investec. By Barry Sergeant. At 11am on 13 ...
Sanral's latest road to ruin
Sanral and its cronies are determined to build a wildly expensive new route to Durban, ...
Acting Hawks boss rushes to appoint 'friends and cronies'
Senior officers excluded from selection committees. By Glynis Underhill. When in March Judge Elias Matojane of ...
UPDATE: Glimmer in the Transet tunnel
A combined summons has finally been issued against South Africa’s national transport monopoly, Transnet, ...
That sinking feeling
Not since the Battle of Trafalgar have we witnessed such marine hostilities.  By Jack Lundin. More ...
Dear Editor
Bribery comes before a fall ♦ Praise for Sue Segar ♦ Sooliman, wives and the ...
Editorial: The Sunday Times gets played - again
The Sunday Times gets played – again Our cover story reveals how, once again, the Sunday ...
Hawking. Star wars
Travelling to Infinity by Jane Hawking (Alma Books) So, Mrs Hawking, what’s it like, being ...
Fiddle-de-dee. Sound advice
Well, when they’ve dug up Rhodes’s evil bones in Zim and hurled them down ...
Say aaarghhh! Hospital horrors
In June a very good friend of mine, Sipho Masuku, died as a result of ...
Classified ads #190 August 2015
FOREIGN HOLIDAY ACCOMMODATION ♦ LOCAL HOLIDAY ACCOMMODATION ♦ LOCAL ...
What's up with Labat Africa's share price?
For years, Labat-Africa’s listed stock price bumped along at about 10 cents per share ...