Thinks. It's a wee world

Here I sit on the seniorburgers se bankie at my Friendly Spar, as advertised. I am a seniorburger with extra mustard and chilli tomato sauce because I am darem so waais, man, also mature, like a good cheese. And what I am so wise and mature about is summoning up remembrance of things past to the sessions of sweet silent thought, ’ksê. Presently the sight of a great robust Zulu security guard brings to mind remembrance of hitch-hiking through British Africa in a university blazer in 1950, with a collapsible fishing rod and nice pulled-up woolen socks so everybody can see I am a jolly decent sort of chap and give me a lift.

I arrive in a place called Dodoma in Tanganyika, and the place is abuzz because the District Commissioner himself will be here this evening, he’s on tour of his territory for cocktails and speeches, see, and as it happens his secretary has just given me a lift into town.

Great stuff, man! The great robust security Askaris are on parade. They wear a red fez titfer like King Farouk of Egypt and smart khaki shorts and tunic, with a Sam Brown belt like Kitchener of Khartoum and leather sandals like Caesar’s soldiers and their legs are polished. They don’t wear socks, hey, so their legs have to be all shiny like Tommy Atkin’s boots.

They get issued with special brown leg-polishing wax and if their legs aren’t shiny they suffer military punishment. Also their toenails must be cut to regulation length.

Inside the boma stand invited Brit coffee farmers and senior colonial staff and yours truly, sipping cocktails and murmuring platitudes about the King’s health, and after cocktail #12- or-so I need a lavvy and make my way to the edge of the lawn where stand many gentlemen shoulder to shoulder and all doing a wee in the direction of a rising moon. In Africa urination is the great male leveller; here stand the DC, coffee farmers, staff, Askaris and myself, all democratically relieving ourselves.

Culturally speaking, this is the Great African Bospis. I am next to the DC. Nice fellow. So you’re from the South? says he. Yes, say I, Natal. Aaah Natal, Natal! says he, sentimentally. But conversation flags. How do you find Tanganyika? says he. Umm... er... say I, where do ladies wee? What a strange question! he exclaims; where do they er... do it in Natal? They don’t do it by moonlight, say I, it’s time for cultural revolution and gender equality. He gives a good shake of head and willy and tells me to depart his territory tomorrow. He departs indoors.

Well anyway, here sit I now on the Spar old toppies’ bench and summon up remembrance of a visit to SA family in Oz just last year and doing the Great African Bospis in Seednee with nephew Arthur after beer #6 or so.

A full moon is rising, Queen and huntress chaste and fair, and a distant array of nav lights appears alongside her; what a sparkling show! That’s the plane from New Zealand, says Arthur, where nothing happens. So what’s happening in Australia, say I, apart from our GAB? Oh I don’t know, says he, we do play our international role, you know. Ja, say I, so maybe you can explain how a South Pacific country can be part of a North Atlantic military force in the middle of Asia? You know – Afghanistan? You are an intellectual wanker, says Arthur.

I don’t know. I don’t think there’s much chance for humanity, we’re all so bloody shabby, think I. This Spar is abuzz on Saturday morning, trolleys groan ’neath loads of food, at the tills the display screens twinkle great sums of profit. At one of them the great robust Zulu security man is engaged in endless altercation 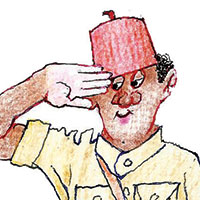 with the till girl and a customer. A trio of muscular young men appear: two look sort of eastern Mediterranean, the other African, and all so handsome, handsome. They wear T-shirts with the motto COURAGE TO BE FREE and they are those gays which in the evil old days used to be called fairies, their wrists are dangly and their hips wiggly. They stand about whilst the quarrel grinds interminably on and on. Then suddenly one of them makes a move, firmly embraces the security man and plants a purposeful kiss upon his face. Security man is utterly flummoxed; is this sexual assault, GBH grievous bodily harm, or what? Should he knock this person down, put the handcuffs on him?

But there is only one thing he can do;  all the till girls are giggling, customers are smiling, he has no choice. He smiles too, if feebly. There’s a chance for humanity yet.