When yellow leaves, or none or few, do hang upon the bough - maybe it’s time to soothe the melancholy of the dying year with a juicy thriller. Enough already of political glooms and endless TV disasters. A clever little escapist thriller might just revive flagging energies.

The Girl on the Train fits the bill. Author Paula Hawkins, born and bred in darkest Zimbabwe, casts a beadily perceptive eye on the seeming propriety of British suburban life, and then exposes the worm in the bud. Well a whole can of worms, actually. The ex-colonial’s cool social observation is flavoured satisfyingly with raw whodunit excitement. 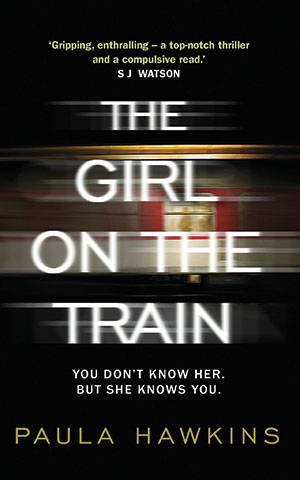 The movie Rosemary’s Baby historically exploited the fears of nice middle class types, living in dread of demonic intrusions on hard-won respectability. The Girl on the Train similarly mines the ordinary to extract the extraordinary. It’s been done before, but the formula is presented here by an extremely observant  writer. The banalities of quotidien life are drawn calmly; nightmare interventions are dripped into daily life like slow poison.

Commuters are much  given to musing on the lives glimpsed from railway carriage windows. And vice versa. Hawkins cunningly uses that mutual fascination to build convincing drama behind the facades. The commuter’s voyeuristic glimpses of strangers’ daily lives, of individuals unknowingly observed, sometimes for years, become  a form of theatre.

But what happens when you join the cast and discover that the characters do not necessarily fit the sentimental cliches?

Which is where the shambolic, pathetically alcoholic protagonist totters into focus. And out of focus. She is a divorcee,  an emotionally  wounded woman who may, or may not, have witnessed foul play beside the railway line.

Is she simply a boozy, unreliable voyeur, or are her hectic suspicions justified? Sceptical police and patient  and impatient friends are sorely tried by the ranting of our heroine. And, in her own way, she is a hero, warring against her drowning self and fighting for her sanity

The choice of a pathetically alcoholic lead character is key to the success of the thriller. The hazy confusions arising from her condition, the clashes between reality and fantasy, should inspire lots of weird filmic fantasy blurs.

Unsurprisingly, The Girl on the Train has been optioned for film by prestigious Dreamworks. The starring eponymous character, given a decent script, is potentially a dream role for a not-so-young star. Gallantry forbids any suggestion of possible candidates.

Well, not really. Susan Sarandon and Rosamund  Pike come to mind. Both exude the superficially disillusioned facade, with tender soul to be revealed as and when.

For film purposes, Paula Hawkins, by guess or by nous, has written a tale which can easily be translated to either American or British settings. Commuting is commuting, either side of the Atlantic. The respective national suburban variations would simply be a matter of choice. Either way, a half decent director could have enormous fun with the thriller elements.