Letting it all hang out

As the rain buckets down for the second week in a row and parents give up the battle to keep their children off devices, one has to spare a thought for the homeless (increasingly, there they are;  scraggly bearded, mostly men) hovering on the periphery of our dinky-looking lives. More than 105,000 Australians are officially homeless. About 25% are Aboriginal, nearly 18,000 are children, and most have pets or “companion animals” which they often look after better than themselves. The biggest reason (accounting for about 31%) for homelessness is domestic violence.

Just when no one here believed it would come to pass – and ten years after they’d been incarcerated – eight of the Bali Nine drug smugglers were executed by firing squad in Indonesia. The nation grieved for the two Aussies, Andrew Chan and Myuran Sukumaran. Vigils were held across Australia for the rehabilitated men (one of whom was recently ordained as a priest, the other was a keen painter) and Australia recalled its ambassador from Indonesia, while the National Gallery took down a portrait photo of “strong man” Indonesian President Joko Widodo.

Speaking of the National Gallery, about 50 people took part in a naked after-hours gallery tour to view the works of American “light and space” artist James Turrell. The event – also  regarded as art, a “conceptual work” – was the brainchild of Melbourne’s Stuart Ringholt, who delves into the “psychology of embarrassment and humiliation”. The guards remained  firmly clothed.

So liberating was it for those who partook, that a woman did cartwheels across the gallery. “Without clothes,” wrote one participant, “people are reduced to a bowl of human fruit: colourful but lacking in pretension.” Being naked, says Ringholt, is a kind of “reset” because humans are at their happiest naked, in the bath, or making love, for example. 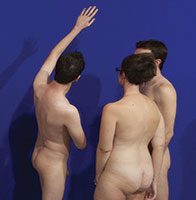 Hard to believe it still exists, but Queensland’s “gay panic” homicide defence should be scrapped, says Brisbane’s Anglican archbishop. The archaic measure, known as “homosexual advance defence”, allows that a murder charge may be reduced to manslaughter if the defendant establishes that their victim “came on” to them and the killing was in self-defence.

On the Tony Abbott front, the PM, who has survived various attempts to oust him, sails defiantly on. There is, commented one journalist, “a sort of normalisation of awfulness” with bad policies and embarrassing behaviour so routine that it’s almost passe. The latest affront has seen Abbott award AU$4m in grants to climate contrarian Bjorn Lomborg of the Copenhagen Consensus Centre to set up a climate think tank at the University of West Australia. Meanwhile, Abbott is abolishing the respected Climate Change Commission – for budgetary reasons.

Lomborg has campaigned against the Kyoto Protocol and the use of carbon pricing to cut emissions. His centre’s methodology will be “cost benefit analysis” which was described by one academic as “not a methodology… (but) economics 101.”