Jani Redux! The indomitable Jani Allan has riz again, after an appalling, Dickensian fall from grace. At last she gives her truths, fearlessly naming names in a page-turning memoir. Those who knew the columnist in her triumphant previous incarnation will be staggered by this tale of astonishing endurance. And wry humour. 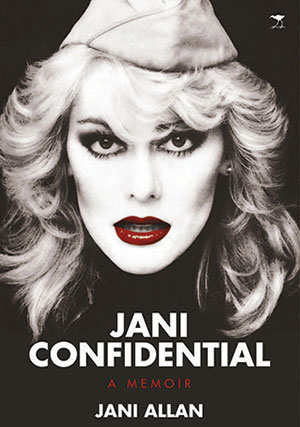 Who would have thought that the pampered darling of the South African champagne circuit would survive the lurid humiliations of the Eugene Terre’Blanche scandal, betrayal by colleagues, a bomb blast, and innumerable other slings and arrows of literally outrageous fortune?

I must declare an interest: the dramatically beauteous Jani was, for a while in the eighties, a member of my Lifestyle department staff at the Sunday Times. Into the trad, shabby newsroom floated a long-legged thoroughbred racehorse of a woman. Solicitous male colleagues welcomed her bashfully. Darkly suspicious female colleagues glared. Jani’s glamorous appearance was a challenge to both sexes.

It was ever thus. If she had a weakness, and she did, it was the compulsion to maintain a high personal profile. Her memoir is perfectly frank about her errors. She revelled in the fun and games of a hectic social life, where she was invited everywhere, reporting wittily on the excesses of the rich.

But when she became the news, rather than the sharp-eyed commentator, things began to go wrong. Disastrously.

Her interview with Terre’Blanche marked the dangerous brink of the chasm. Editor Tertius Myburgh dispatched her to report on the headline-grabbing ET, and she did so with subtle mockery. The humourless PC view was that Jani, former child concert pianist, artist and English teacher, had actually  fallen for the coarse, chest-beating ET, leader of a tiny white fascist “army”. The media, as with Malema subsequently, provided ample shock-horror coverage of ET’s puerile efforts to bestride the narrow world, and the Nat government took notice.

But, as Jani explains wearily, ET had fallen in love with her. He bombarded her with messages until she called on his wife to warn him off. Notoriously, that passion eventually led to international headlines. Particularly when a limpet mine blasted Jani’s flat, which she shared with journalist Linda Shaw, latter-day Sunday Times astrologer. Their friendship did not survive evidence given by Shaw in Jani’s British High Court action claiming damages for British TV Channel 4’s allegations that she had sexual relations with ET.

Many curious details surrounding the case (mysterious burglaries at the flat, theft of Jani’s medical files in Johannesburg, and of an old diary, in London), stirred suspicion in her mind that government spooks were trying to use her in order to discredit ET. Also that the British TV channel might have been playing rough in order to duck her damages claims.

Dolce vita crumbled into a humble life of fear and want as her funds ran out. Being painted as a femme fatale was unjust, a psychologist explained: Ironically, Jani, an orphan adopted by an ambitious mother, was a deeply insecure woman who tended to prefer the love of her pets to the demands of men.

Now she reveals all, as the pop formula goes; and a number of individuals may yet regret their shabby treatment of a fascinating woman who, in recent times, was desperate and homeless in the United States. The party isn’t over yet.