I shall arise and go now, and go to Tonteldoos, said I to myself when I turned sixteen. Going geographical, that is, as the outies have it round here. Walkabout in Oz. Hitch-hiking. Hitting the sticks, where lived a relative many times removed, name of Koos Ericsson. I should get another bloody husband to box your bloody ears said my ma when it was clear that I was going to go regardless. Here, take this money and go by train to Middelburg. Phone Oom Koos from the station and tell him you’re coming.

So I phoned from the Middelburg station and got Tonteld 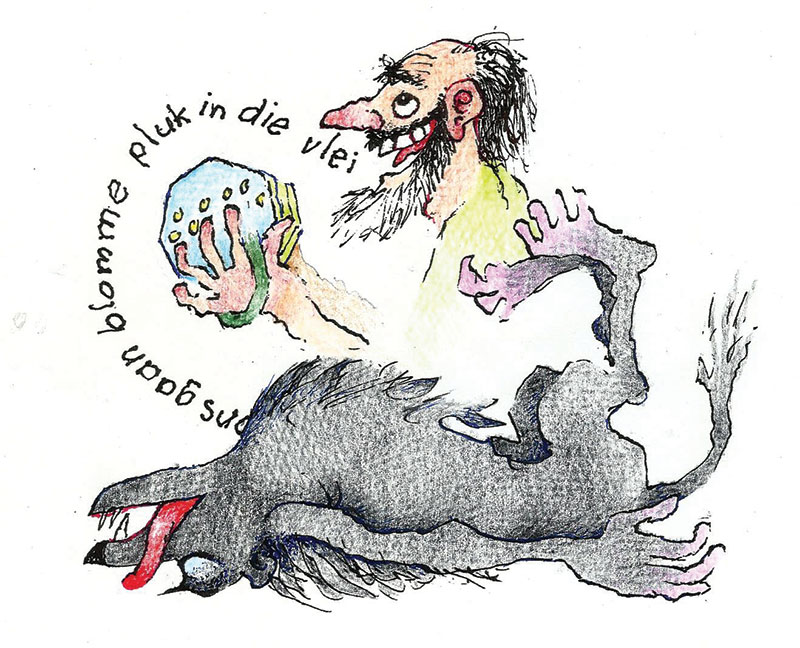 oos on a party line. Hullo, Tontelboks hierso, said a ladylike voice whose ladylike lips could never utter the d-word on a public telephone. I’d like to speak to Mnr Ericsson please, on the farm Buffelvrek, said I. Well he is eating he’s breakfast, said L.Voice. Oh, er, said I, I’d better wait, hey? Silence. Tell me, said I, to buoy up the conversation a bit, how he comes to be Ericsson; I mean it’s not really a South African name, is it?

Well he’s ole femily were soort vanna Waaikiengs, laaik, said L.Voice, and they come to the Transvaal a hunnert years ago. By dragonship, hey? said I feebly. Man I dunno, said she, it is only Mnr Koos and Krisjan now and a whole lot of fowls and I never arsed about it. More silence. Er, said I after a bit, do you think he’s finished eating? I sensed her looking at her watch. Well he’s drinking he’s coffee now, but I wool call him, said she.

We meet. Nice old bloke, entirely wrinkled, his nose and upper face entirely kippered by smoke from a great reeking pipe. We drive over veld which is just one great sun-baked brick, until unexpectedly we come upon a gate and a dozen or two stricken Eucalypts desperately trying to suck up a bit of moisture from way down the bottom of Earth’s mantle, and in amongst this lot a d.i.y. mud house on an armature of gum sticks, very quaint and tasteful in a romantic sort of way. All about are hundreds of chickens with the great naked velociraptor thighs, and fit, man, fit, from pursuing locusts and small snakes and things across the veld. They are uncaged because there’s no point in running away from this place, there’s no water anywhere else. No dogs, I notice. A fellow primate sits atop a pole doing unseemly autoerotic things. The fowls observe a circular exclusion zone of ten metres radius, the length of his chain.

Nice baboon, I observe, what’s his name? Christiaan, seg Oom Koos. After Generaal de Wet. The bitter einder De Wet of course, he explains, not that filthy hensopper swine brother Piet who went over to the British and became their spaai. Aha! I exclaim, a noble beast… er… doesn’t he become bored just sitting up there doing… you know… that thing all day? Ag nee, wat! seg Oom K, he enjoy him more than mous people. Sometimes when it get cool in the afternoon he overjoy him, then I take him down and we 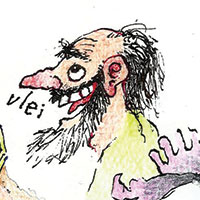 sit on the stoep and I play konsertina for him and he get nice and relax. He describes how all the fowls come into the house at night, and Christiaan patrols the property in search of eggs like it’s Easter Day and scares the shit out of improbable villains. Aha! I exclaim…er…what about eggs for yourself? No, man, seg hy, the clever hoenders lay eggs inside the house. Aha! I exclaim.

I do his day’s chores with him. We get the windmill pumping the day’s water into a trough and put a bit on a shrivelled pumpkin plant nearby, and motor over a hill to inspect certain ill-assorted cows and oxen and a black wildebeest of most lethal aspect, with arched neck and long white tail and mane and beard on the front of its face and those dagger horns pointing straight forward at one’s heart. Doun’ get out, seg Oom K, the bugger wool kiel you, man. But what do you do for milk? I ask. No, he explains, if a cow want to be milk she come in the kitchen after she had her drink from the pump.

So it’s stoepsit en spekskiet time towards sunset, I drink some mampoer to make a man of me and Christiaan is unchained and lies supine while Oom K scratches his belly. Oukei, seg Oom K: konsertina time, what do you want me to play, hey? Oh, say I, how about As jy kan jol soos ek kan jol dan jol ons in die city hall? Ag nee wat, seg Oom Koos, Christiaan like serious music, man. He wheezes on his concertina and sings: Kom ons gaan blomme pluk in die vlei, daar sing die voeltjies vrolik en bly, and Christiaan scratches his armpits and falls fast asleep. We tiptoe off. His patrol starts by moonlight.