BuzzFeed news posted a world “exclusive”: a political interview with Australia’s foreign minister Julie Bishop, who answered all the questions in cutesy emoticons from her pink-covered smartphone. For example: Australia’s relationship with its role model, the USA, got three emojis: a tick, a thumbs-up and a smiley face. Indonesia got the same two initial positives and a “pensive face” – not surprising, since it was on the brink of executing by firing squad two Australian ringleaders of the “Bali Nine”, drug smugglers – Andrew Chan and Myuran Sukumaran.

Caught by the Indonesians in 2005 after a tip-off by Australia’s federal police – aware of the potential death penalty – they’ve been in jail for almost a decade and are said to be reformed characters (one has become a Christian minister and the other has earned a degree), so Australian public opinion has swung their way and the (previously hardline) PM Tony Abbott has made a ham-fisted appeal for clemency. (Abbott “reminded” the Indonesians of Australia’s aid during the tsunami, asked that they “reciprocate” and warned of “consequences”. Needless to say, the last went down very badly. “No one responds well to threats”, said the Indonesians. The emoticon Bishop used for Abbott is the running man, suggesting he’s in serious political trouble on all fronts.

Newmatilda.com publicised the call by an activist group, Beyond Green, encouraging Australians to cc all their email direct to Attorney General George Brandis – thereby crashing his parliamentary email with their random personal stuff. This was in protest at proposed metadata retention laws. Ministers (including the communications minister) are reportedly encrypting their own messages about the Liberals’ ongoing leadership crisis, using Wickr which allows messages to self-destruct in a set time.

Wishful thinking, perhaps, but it looks like running-man Abbott may really have gone too far this time. His government’s bullying and attempted character assassination of the Australian Human Rights Commissioner, Professor Gillian Triggs, has his Attorney General (a political appointment in Australia) under investigation by the Federal Police for allegedly offering her a “prestigious international legal position” as inducement to resign, following her damning report on the effects of mandatory detention on asylum-seeker children.

Abbott called the report a “political stitch-up” while his government mounted a smear campaign, claiming Triggs had sent “indirect signals” to the AG that she’d be open to his offer. Triggs, a softly spoken, measured and erudite woman, categorically denied the accusations.

The senate has taken the exceptional step of censuring the AG, the International Criminal Court has sent letters of support for Triggs, while a prominent Liberal minister, Malcolm Turnbull, distanced himself by heaping praise on her. Many are hoping Turnbull will succeed Abbott as PM.

In an article, titled “Triggs attacked for defending the powerless”, this year’s Man Booker Prize winner Richard Flanagan said there had always been something “deeply disturbing” about the Abbott government’s attitude to women. In opposition, in 2013, a menu for a fundraiser depicted the then prime minister, red-haired Julia Gillard, in “the most vile way”. (The first menu item: “Julia Gillard Kentucky Fried Quail – Small Breasts, Huge Thighs & a Big Red Box.”

Flanagan says the Australian government is “a deathmask of 1970s right-wing student bigotries and undergraduate bullying.” More impunity is hard to imagine. 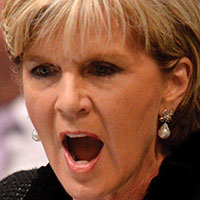 Next on the commission’s list is the St Joseph’s orphanage which is seeking responses from its former operators, the Sisters of Mercy. A 71-year-old Catholic priest faces sentencing for multiple sexual offences in the 1980s with allegations that he’d comfort, and then assault, homesick boarding school boys. Day after day, month after month, these revelations about church people, while at another level, we hear that a NSW psychologist who encouraged a client to have sex with a dog and then joined in, has been banned from practising. Photos were taken.